Surprisingly, rostering a Browns defensive player with 30 DKFP would not have been too far off the optimal build, which seems almost impossible on a full slate of games. Josh Jacobs, A.J. Brown and Amon-Ra St. Brown were the three players who appeared on all five of the winning teams while Jalen Hurts was on three out of the five.

Week 13 held several unique contests including four web3 promotional contests, the Steve Aoki All-Star League, and the Kevin Hart Experience. The top three finishers in the web3 contests all won NFTs of varying rarity. The top fifty finishers in the Aoki League all received a Steve Aoki signed copy of his memoir “Blue: The Color of Noise." Finally, the winner of the Kevin Hart contest won $5,000 cash and an experience of a lifetime at Kevin Hart’s upcoming commercial shoot.

Here is a look at the winning teams in Week 13: 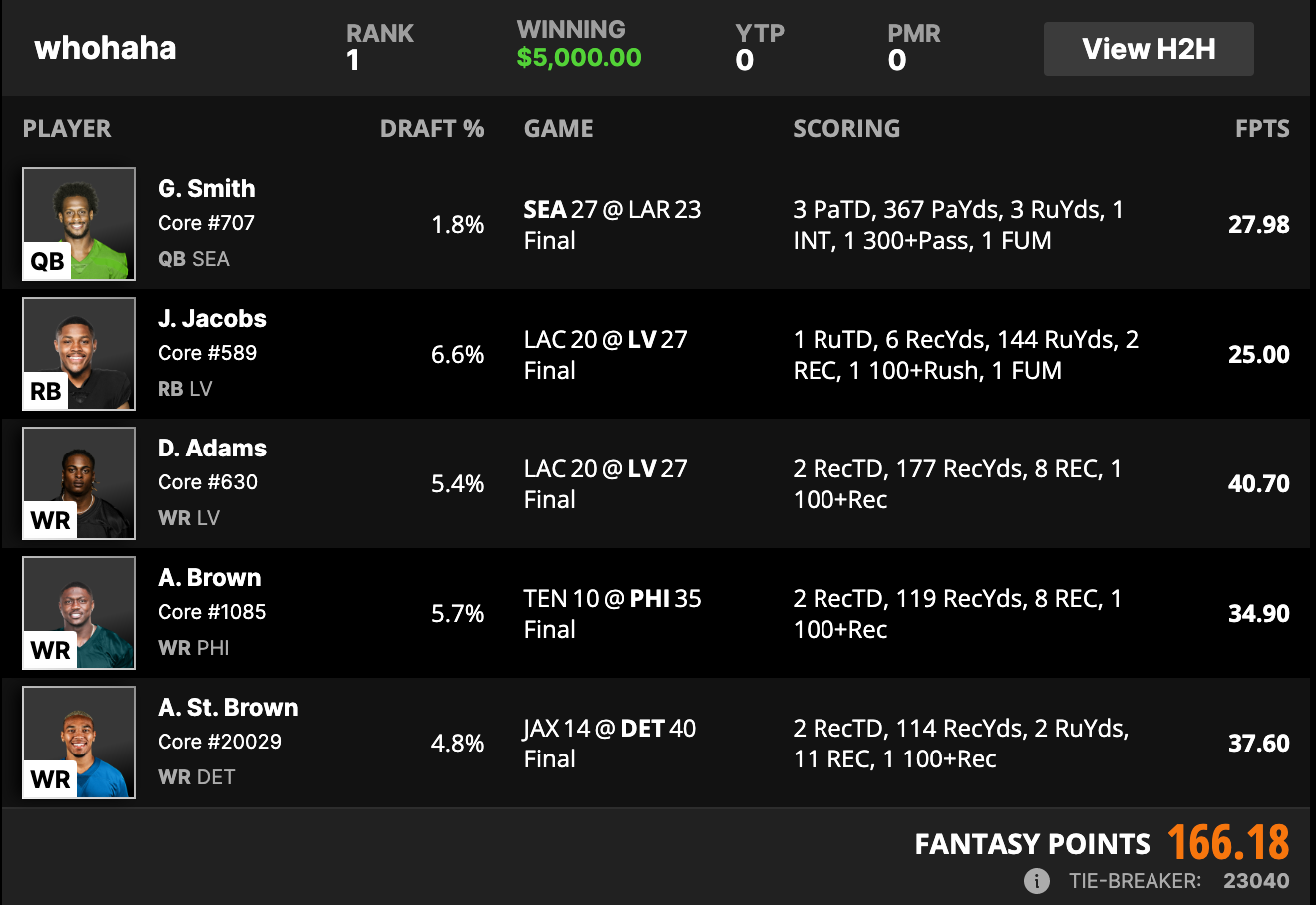 The winner of the CORE Fiat Frenzy was whohaha who scored 166.18 DKFP with the perfect lineup construction. Even though Jalen Hurts had a better outing than Geno Smith, Hurts' SuperStar designation would have forced Davante Adams to be swapped for Tyler Lockett, reducing the overall score by approximately one point. 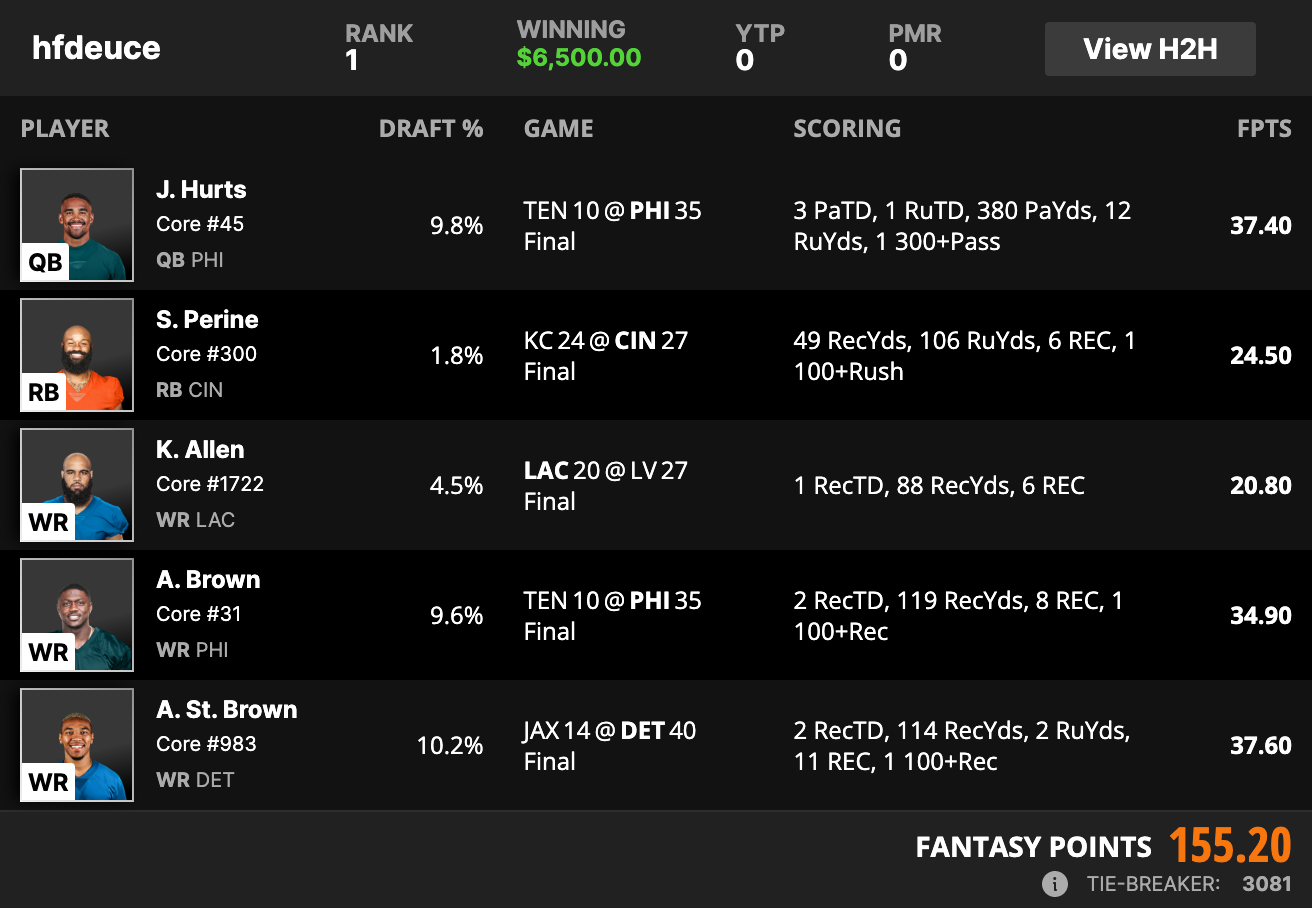 The winner of the Kevin Hart X Reignmakers Contest was hfdeuce who scored 155.2 DKFP. This user won $5,000 cash and an experience of a lifetime at Kevin Hart’s upcoming commercial shoot. 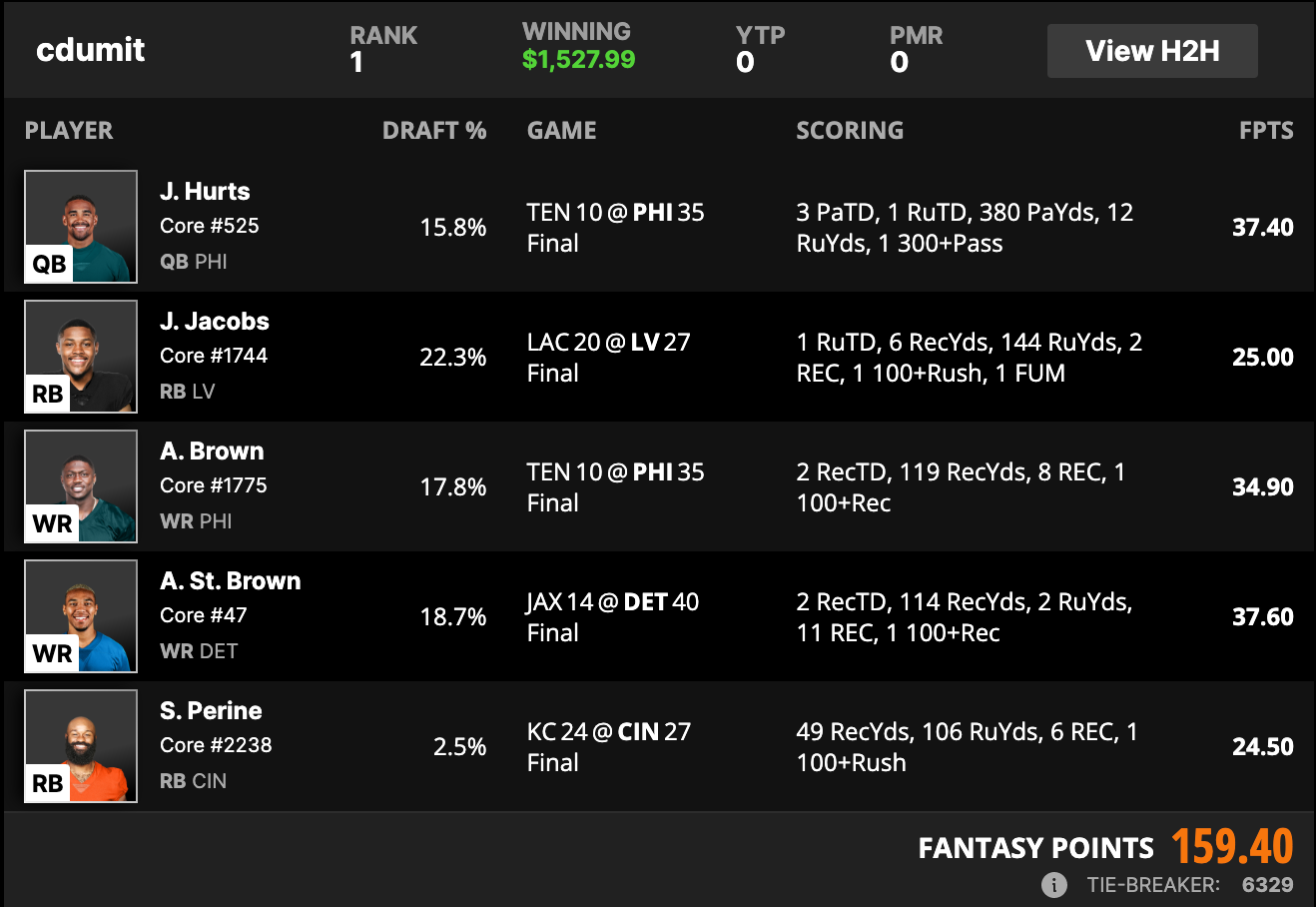 cdumit scored 159.40 DKFP, taking down the Aoki All-Star League. This user won $1,500 for first place, and the top fifty finishers all received a Steve Aoki signed copy of his memoir “Blue: The Color of Noise.” 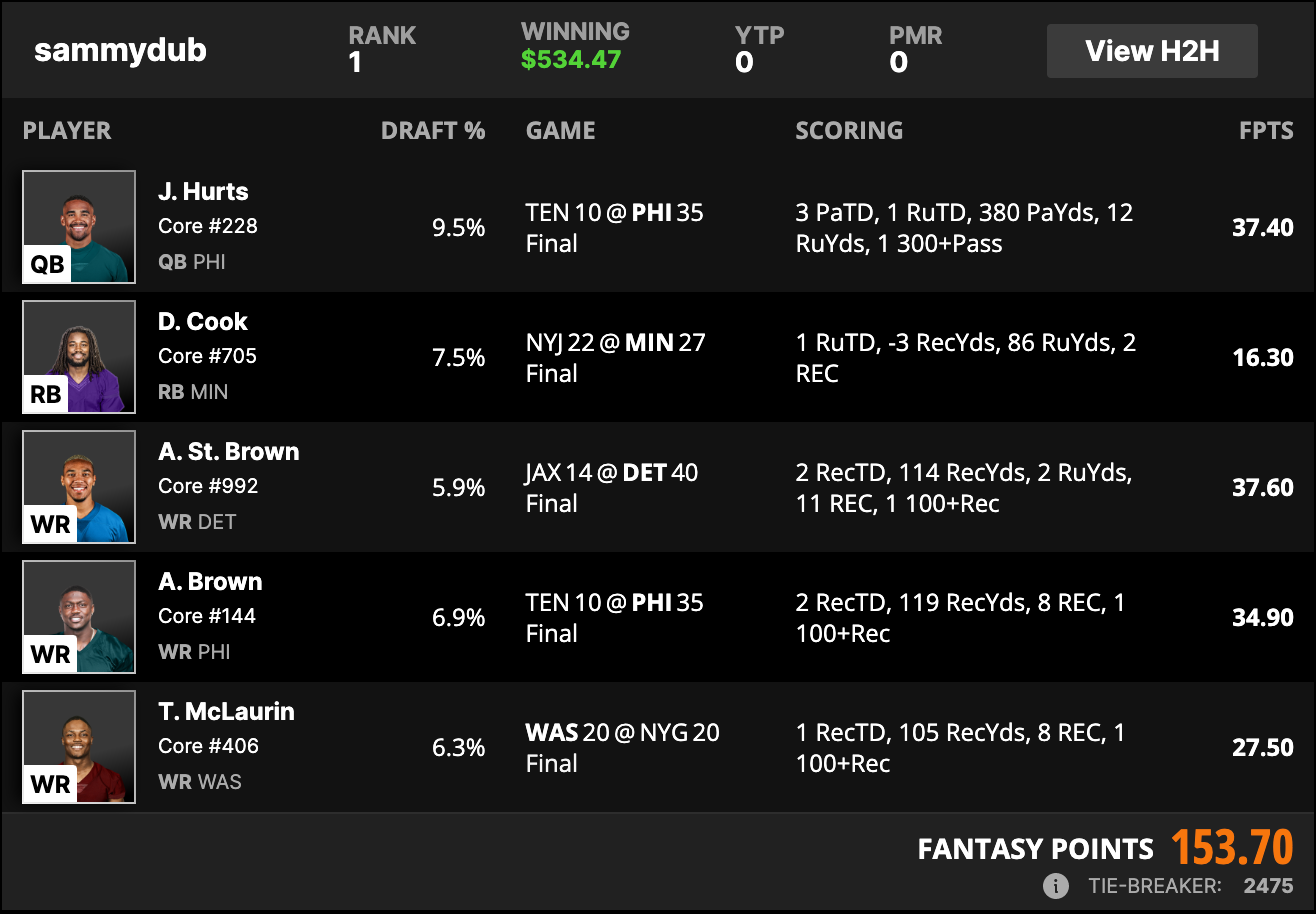 The winner of the web3 CORE contest was sammydub who scored 153.7 DKFP and earned Lazy Lion #2294. All three of the top finishers took home a Lazy Lion NFT, valued at 0.43 ETH at the time of writing. 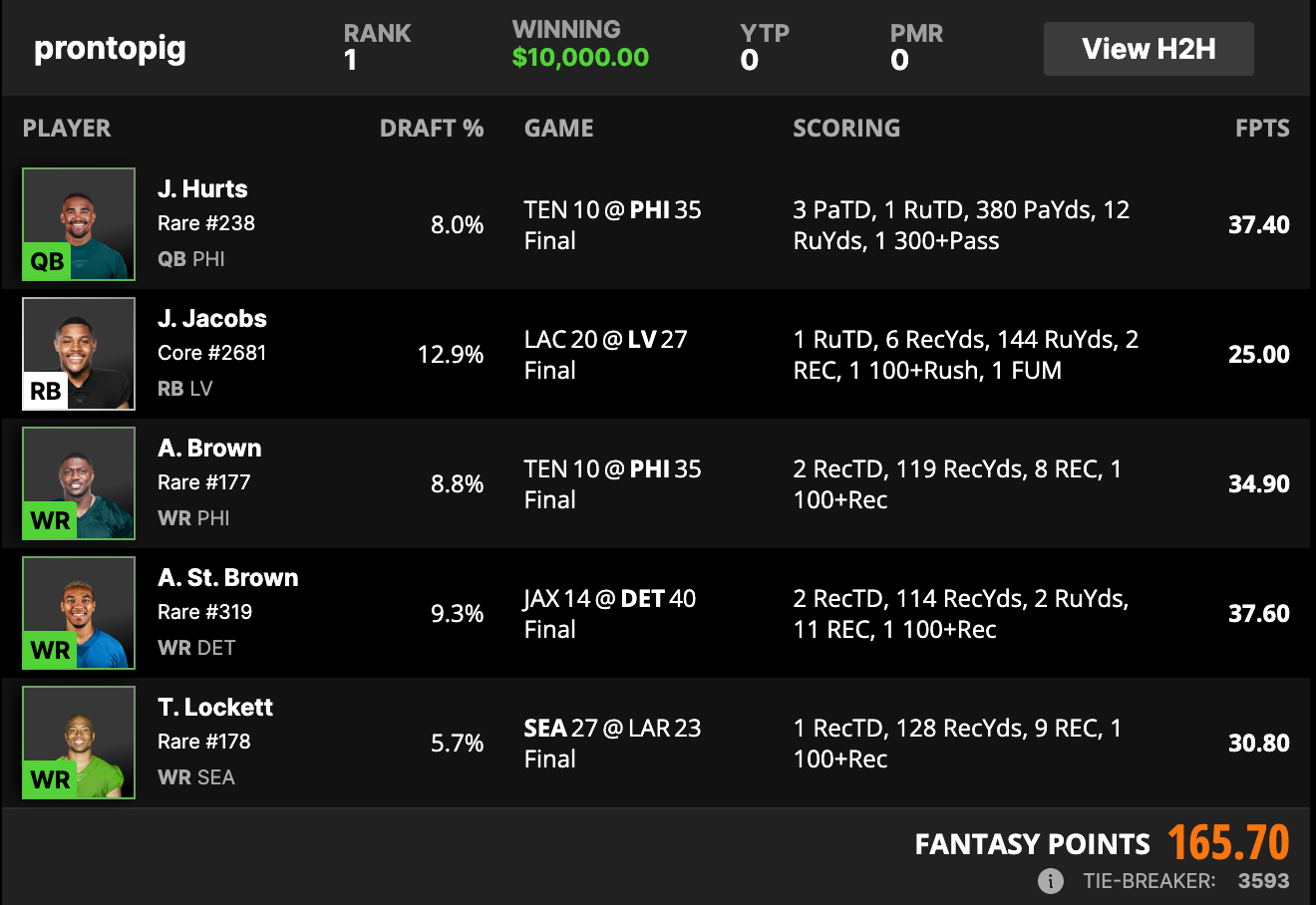 The winner of the RARE Fiat Frenzy was prontopig who built the second-best possible lineup. This team paired Jalen Hurts with A.J. Brown, who had 119 receiving yards and two touchdowns against his former team. Among the big tournaments, this was the only team to roster Tyler Lockett who delivered a WR5 performance. 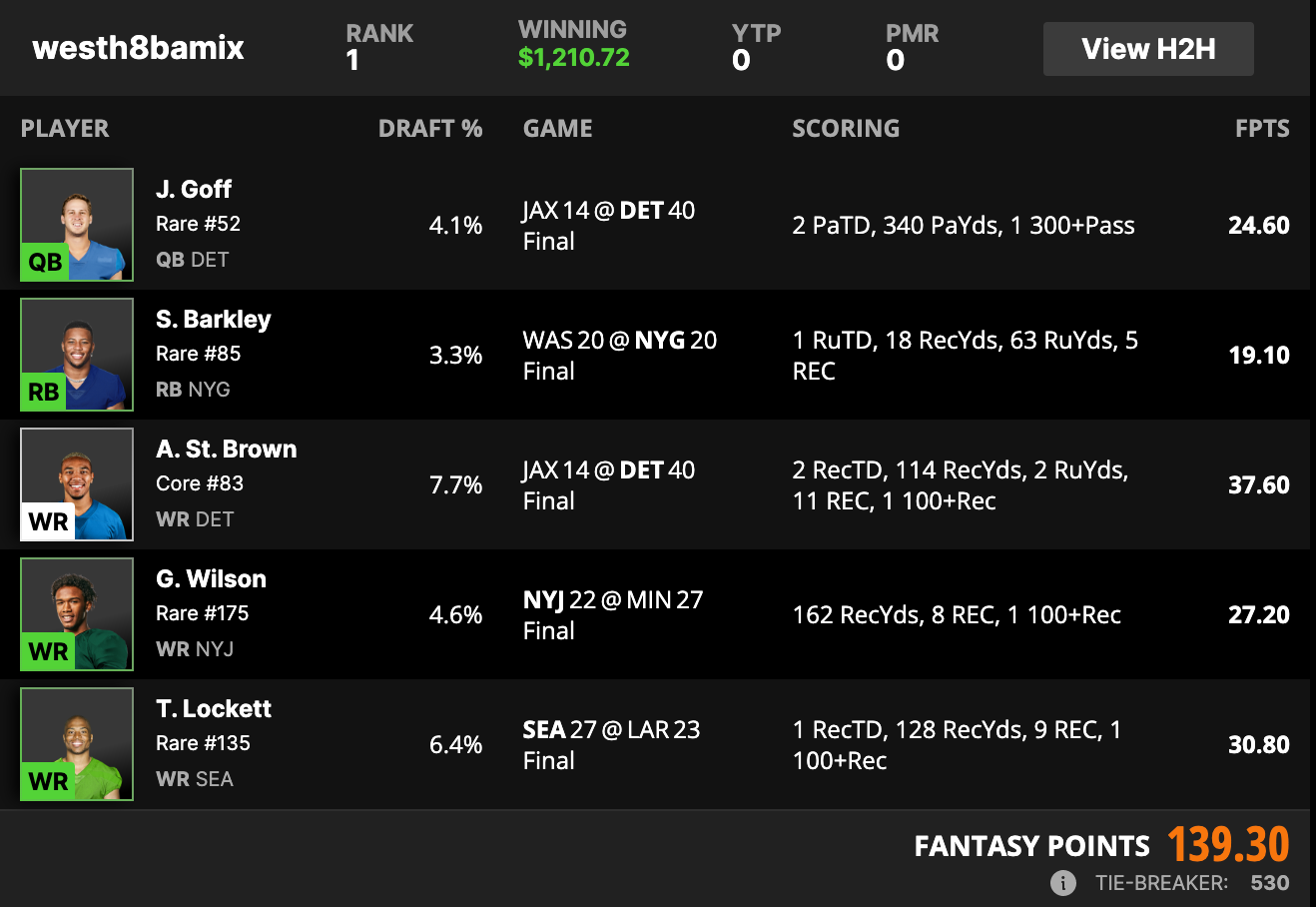 The web3 contest winner at the RARE tier was westh8bamix who needed only 139.3 DKFP to win. This user won mfer #7135 with the help of three of the top-scoring wide receivers, Jared Goff and Saquon Barkley. The top three finishers in this contest won a mfer NFT (1.27 ETH floor price). 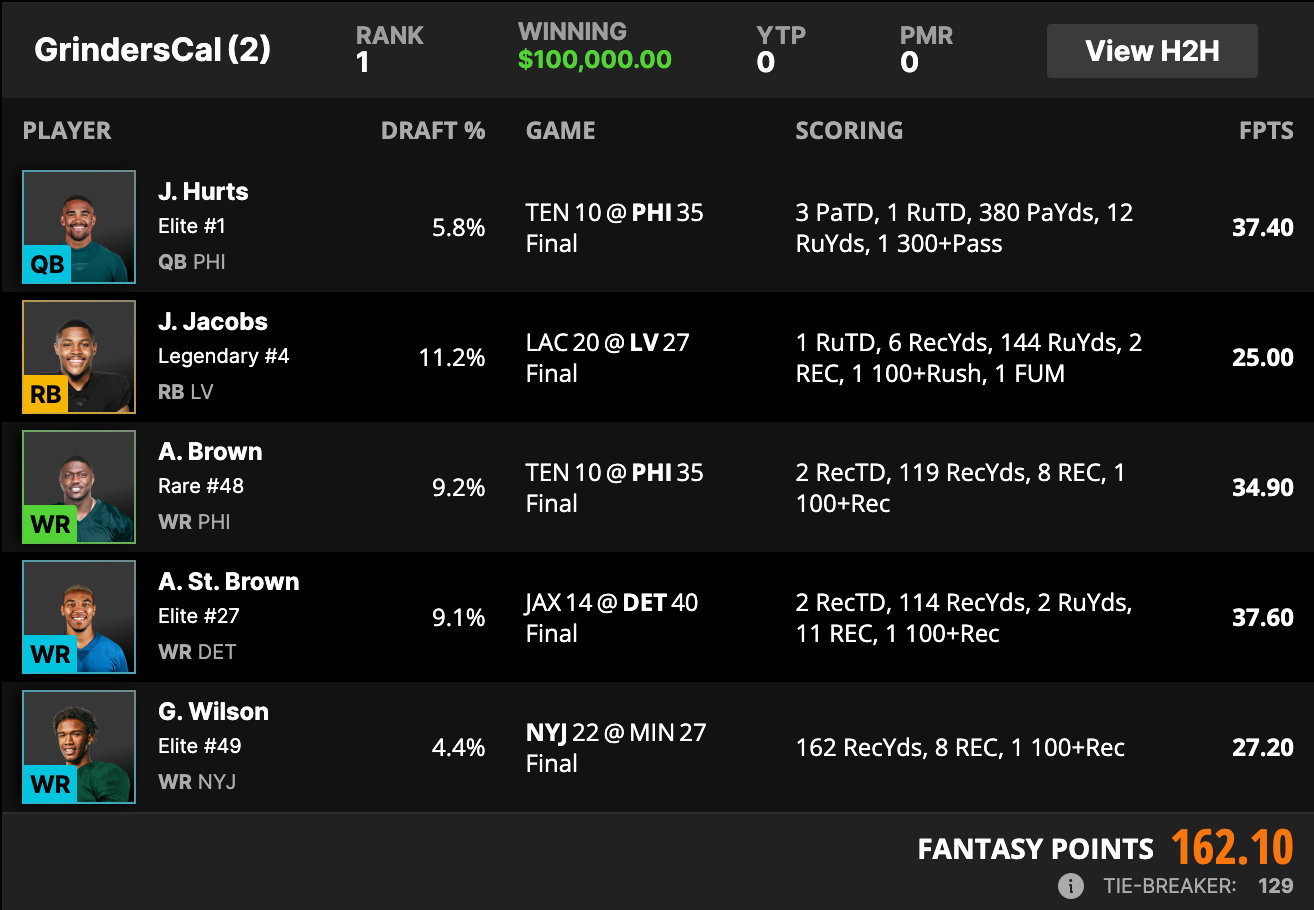 The winner of the ELITE Fiat Frenzy for $100,000 was GrindersCal who won this tournament by 6.4 DKFP. Although not required at this level, GrindersCal played a LEGENDARY Josh Jacobs alongside the Jalen Hurts and A.J. Brown stack. With the victory, GrindersCal brought home the largest cash prize on Reignmakers this week. 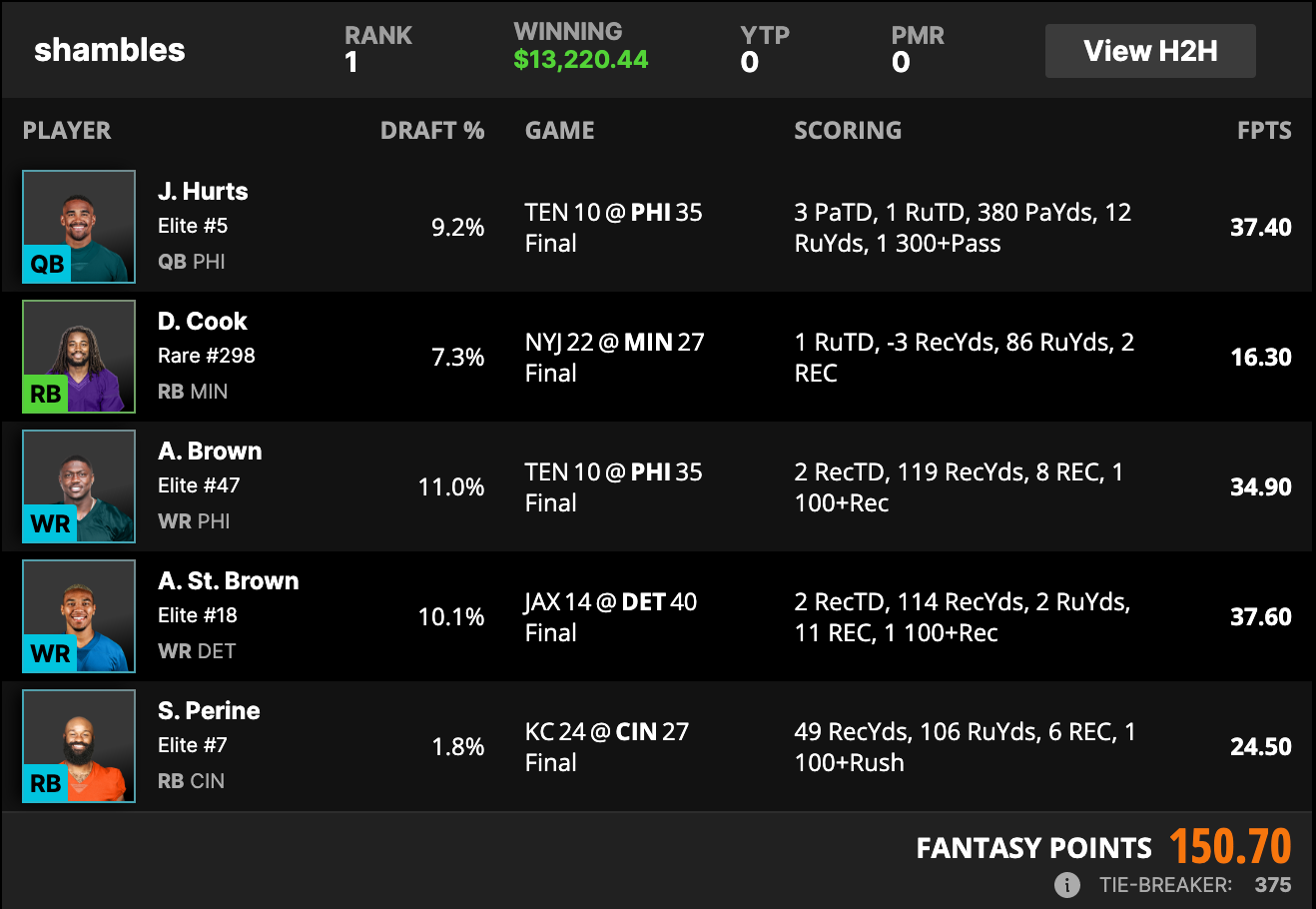 shambles won the ELITE web3 contest by more than 15 DKFP. In this field of 109 players, earning Mutant Ape Yacht Club #26052. Mutant Apes, the companions of Bored Ape Yacht Club NFTs, hold a floor price of 13.20 ETH at the time of writing. 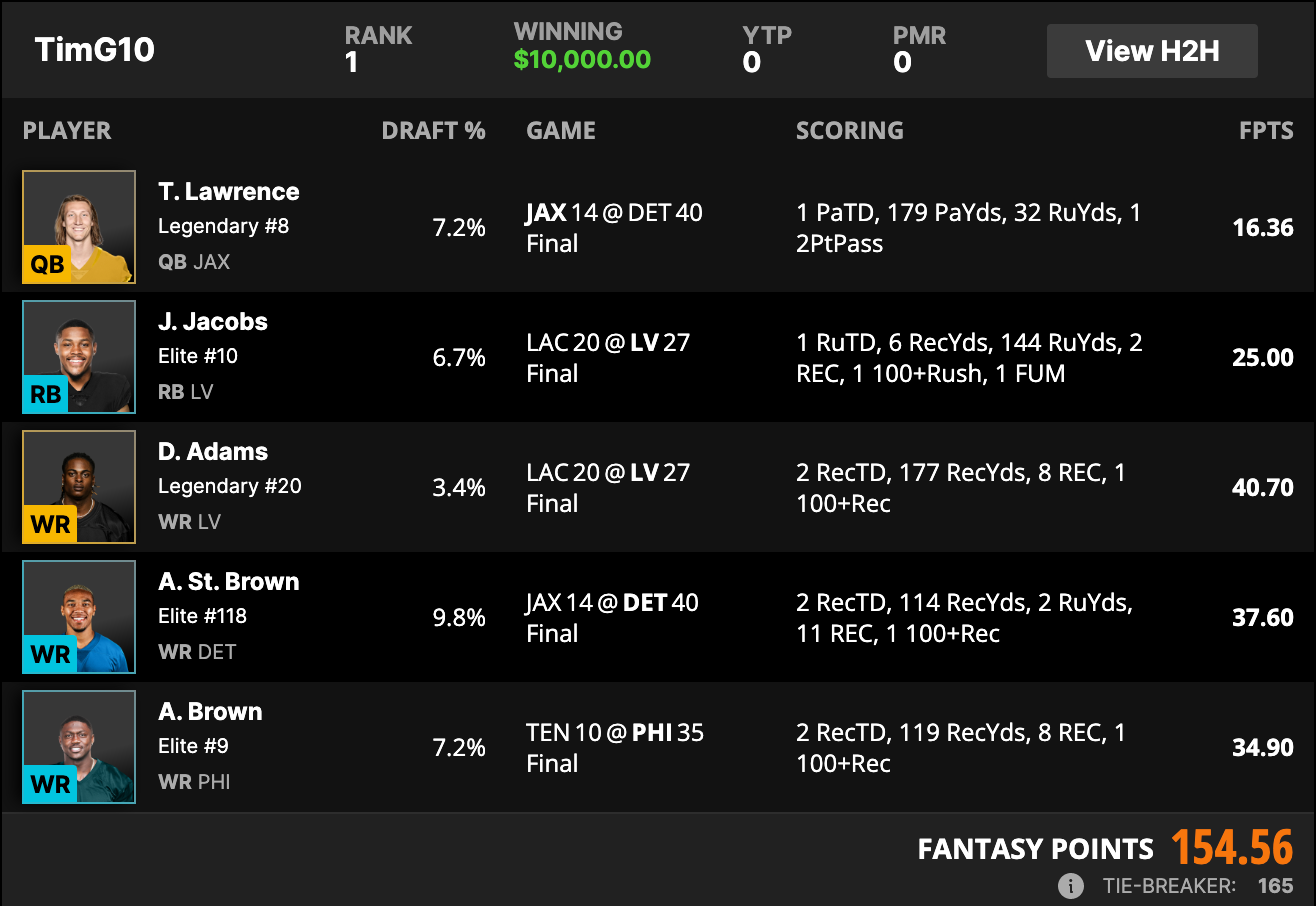 TimG10 was the only winner to roster Trevor Lawrence and had he been swapped for Geno Smith, this would have been the perfect lineup construction. In this field of 734, TimG10 took down the top prize of $10,000. 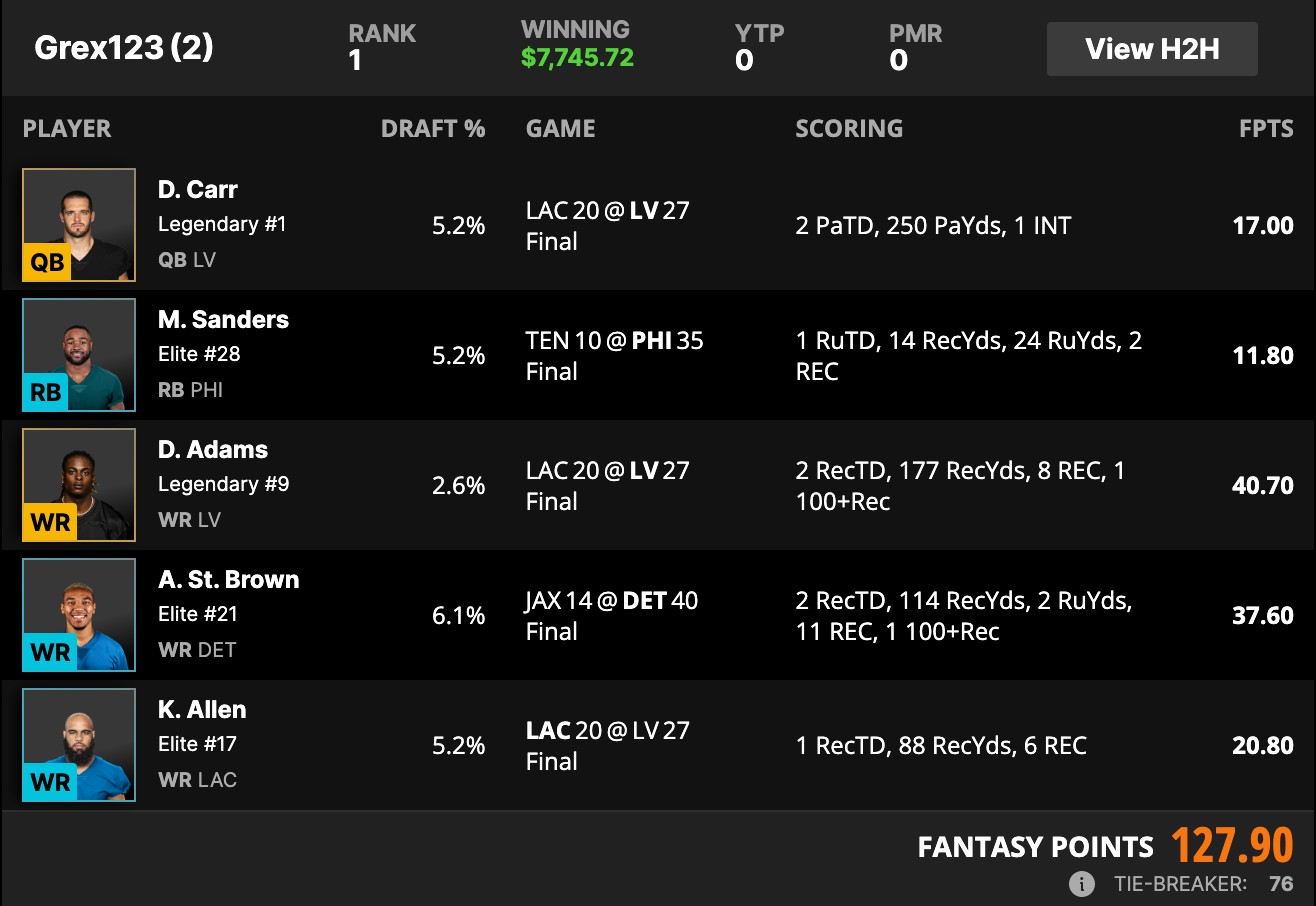 Grex123 needed just 127.6 DKFP to win the LEGENDARY web3 contest this week. The top three finishers won Doodles NFTs, with Grex123 winning Doodle #3936 for first place. Doodles currently have a floor price of 7.39 ETH at the time of writing, according to the rarity page on Lucky Trader. 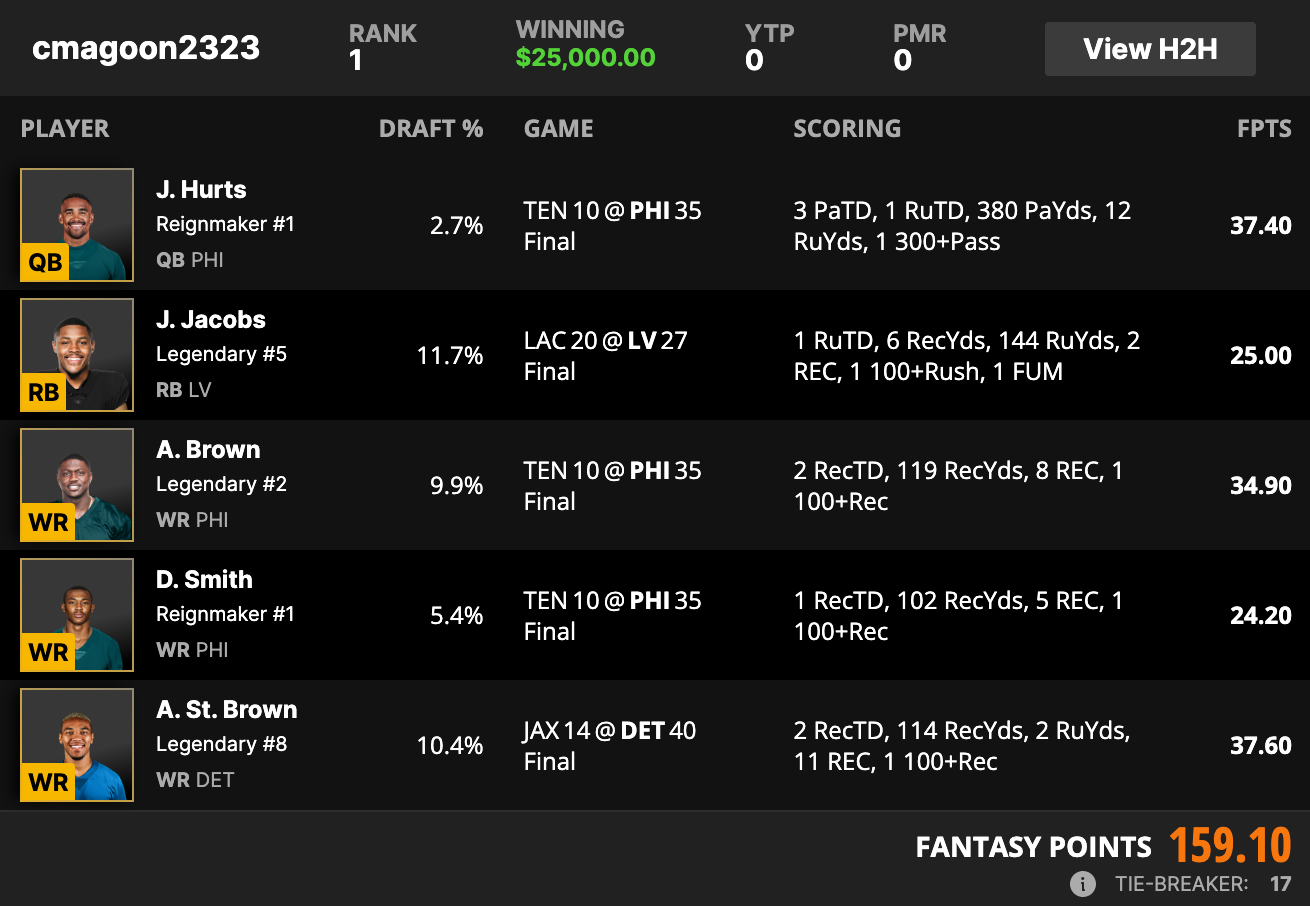 The winner of “The Alpha” at the REIGNMAKER tier was cmagoon2323, winning this contest by more than 16 DKFP. This lineup was the only winning lineup to double-stack Hurts and Brown with DeVonta Smith. The Eagles' passing attack was a strong play this week against the Titans, whose defensive scheme forces opposing offenses to throw. The user won $25,000 for first place in this contest.