What Is Sorare? How to Sign Up, Build a Lineup, and Enter Contests Sorare is a global NFT-based fantasy soccer game built on the Ethereum blockchain.

Users can buy and sell player cards from clubs all over the world in the marketplace. The cards can be used in bi-weekly contests for prizes, including ETH and additional player cards. The unique utility of being able to use your NFTs in these tournaments separates Sorare as a leader in the cross-section of fantasy sports and digital collectibles.

How Does Sorare Work?

Sorare bridges the gap between digital collectibles and fantasy sports. Holding player cards acts in a similar way to a dynasty fantasy football league, as the cards stay in your account until sold or traded in the marketplace.

The Sorare marketplace allows users to list, sell, trade, and bid on cards. Users can send offers that include a mix of ETH and player bids in a package. They can also purchase cards through auctions that run 24/7 on the site.

Sorare lives on Layer 2 of the Ethereum blockchain and covers gas fees, so the market is extremely liquid even on cards that cost less than $10.

Sorare offers a referral system that can be used by all new users. When signing up for Sorare, use a referral link from a friend, as it will benefit both of people. After purchasing five cards through Auction in the first 150 days on the platform, both the new user and referrer will receive a free Limited card that can be used in games or traded on the marketplace.

Sorare offers multiple different ways to load a wallet with funds for its marketplace. Moonpay and Ramp allow users to pay through a bank or credit card with their local currency. The most common crypto wallet that is used on Sorare is Metamask, but users may also use Coinbase Wallet, Wallet Connect, Opera, or Portis for transactions.

When creating a new Sorare account, users will select their favorite team and receive Common tier cards from that team. Common tier cards cannot be purchased or sold in the marketplace. They are used for learning the game in the Rookie League and are not eligible for ETH prizes, just additional common cards.

How to Build a Lineup on Sorare

This will bring you to the competitions page where you will see the competition offerings for the upcoming week of play. Games typically run twice per week from Tuesday to Friday and Friday to Tuesday, locking around 7 a.m. ET.

After selecting your league, you will be brought to a screen with five card slots. The positions required to enter a team are Goalkeeper, Defender, Midfielder, Forward, and Extra. The Extra card can be any non-Goalkeeper position.

You will also be required to choose a captain for the team. The captain receives an additional 20 percent bonus to his score, so choose wisely! Types of Cards and Leveling Up

Player cards receive a boost to scoring based on their accumulated XP and rarity. A base card from the current season receives a 5 percent boost to its overall points. This encourages users to buy new players in auctions and evens the playing field for those cards that have accumulated years of levels.

A card gains XP by entering a team in any contest in a game week, even if the player doesn't have a real-life game. The XP formula is: base_xp + team_minutes_played_xp + player_score_xp.

When a card is transferred in the game via a trade or sale, the XP accumulated on the card is halved for the new user. The XP gets halved, but the level is not necessarily halved as the level scaling flattens out over time.

Here are the types of cards available on Sorare:

Common: Gray cards with no maximum used to learn the game. Level starts at 0 to a maximum of 20, but receives a bonus starting at -45 percent when used in All Star competitions. Casual competitions are only eligible for players with Common cards, and the top three scores receive a Limited tier card.

Training competitions are used to gain XP for players cards, even when players do not play during the game week.

Weekly competitions are rotating "challenge" tournaments with different requirements each week. For example, a Weekly league may require all players in a team to be under the age of 28 and play in a European league.

All Star competitions are the most popular leagues on Sorare. Create a team of five players from any Sorare-eligible team in the world.

Prizes include ETH and player cards for the top teams in the contest. The Rare All Star league rewards users with ETH prizes for beating point thresholds. Teams with over 205 points in a game week receive a 0.01 ETH reward, and teams with over 250 points receive 0.02 ETH.

Common cards can be used in the Rare All Star league but receive a negative 50 percent multiplier to points.

Similar to All Star leagues, Under 23 leagues allow users to enter players from all over the world. However, in this format, the player must be under the age of 23 as of Jun. 30 of the current season in order to be entered in this league. This league offering has created a premium on young talent, as there are more league options to submit lineups for these players.

Higher rarity, or Pro, competitions allow users with better cards to compete for higher-end rewards. For the All Star Rare level, a lineup requires at least four Rare cards and the ability to enter one Common card. In the PRO version of this contest, teams must have at least three Rares but users are also able to enter two Super Rare cards on these teams.

Sorare features teams and leagues from all over the world and the Region leagues allow users to enter teams from the same region instead of around the globe. Champion Europe, Challenger Europe, Asia, and America are the major regions with region-specific contests. The America competition, for instance, includes players from MLS, Superliga Argentina, Liga MX, Colombian Primera A, Brasileiro Serie A, and Peruvian Primera División. 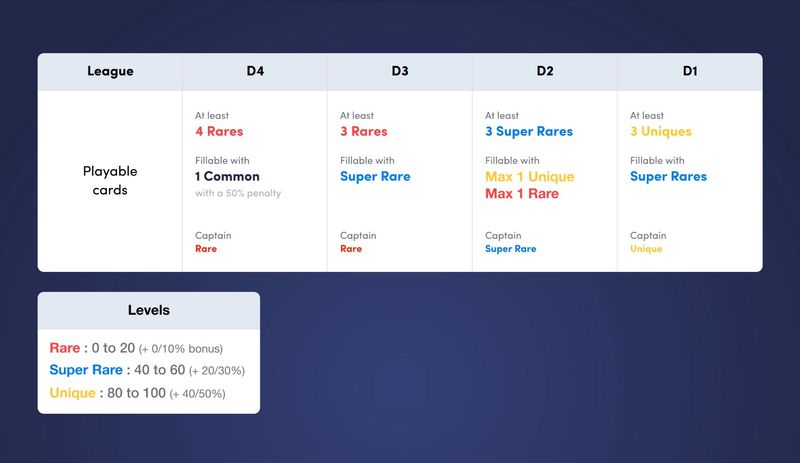 Sorare allows users to buy player cards with credit cards. Technically, you are buying ETH with your local currency which is then used to purchase the cards.

SorareData is an excellent resource to track player's performance and price history. Many experts agree that SorareData is a must-used source in order to compete in the Sorare ecosystem. As of now, SorareData is completely free to use, but there are talks of a premium service being created in the future.

Cards are available to buy in the New Signings through auctions. These cards are issued (minted) by Sorare and how the site earns money. Auctions are available for single cards or bundles. Auctions run 24/7 and more often run for Limited tier cards as they have more supply than other tiers.

Users can list their players for sale on the Transfer Market. These cards were previously minted through auctions and the historical prices of the card are available on its detail page.

Other information minted to the player's card includes serial number, team, and recent performance statistics for the player. Similar to other collectibles, the #1 serial for a player's card tends to trade at a premium, and Sorare has added a filter for #1 serials as a search function.

What’s Next For Sorare?

Sorare has hinted at additional sports being added in the future. Front runners seem to be basketball and tennis professional leagues as they are popular internationally, but that is mostly speculation as of now.

Sorare announced that there will be additional leagues added to help create utility for lower quality cards. The Underdog League will require player cards with lower average scores. The Specialist League will require a mix of high-average and low average-score players.

Sorare plans to remove the ability to use Common cards in the Rare divisions, requiring users to submit teams with five total Rare cards.