It took a variety of players to win tournaments on the Week 15 DraftKings Reignmakers slate, most notably Jalen Hurts, who delivered the No. 1 quarterback performance against the Bears. The Eagles quarterback sat atop the winning lineups for RARE, ELITE, and LEGENDARY tiers with 39.70 DKFP.

It was a unique week at wide receiver where the unlikely trio of Zay Jones, Russell Gage, and Noah Brown finished inside the top four scorers at the position, while several high-end running backs, like Austin Ekeler, Josh Jacobs and Nick Chubb finished with 15 DKFP or fewer.

The perfect lineup construction this week was Jalen Hurts, Jerick McKinnon, A.J. Brown, Zay Jones and Rhamondre Stevenson. Once again, no player rostered this exact lineup, however, three of the winners were just a two-player swap away.

One of the most exciting parts of Week 15 was the three-game Saturday slate headlined by the incredible 39-36 comeback win by the Vikings. Trailing 33-0 at halftime, Minnesota pulled off the largest comeback in NFL history. Reignmakers players who stacked that game were very happy with the end result.

The Aoki All-Star League and the SlyCrocs League were back in action this week. In the Aoki League, the top finisher won $1,500 cash, and the top 30 finishers all won A0K1VERSE Passport NFTs. In the SlyCrocs League, first place won $3,000 cash and SupDuck #9313.

Here is a look at the winning teams in Week 15: The winner of the Aoki All-Star League was SleazzyNorlezzy who Rostered a Chiefs stack with Patrick Mahomes, Travis Kelce, and Jerick McKinnon. McKinnon finished as the No. 1 running back on this slate and was only 0.8 percent rostered in this contest. This user won $1,500 and an A0K1VERSE Passport NFT which has a floor price of 0.08 ETH at the time of writing. mjpjry910 took down the SlyCrocs league with a Jaguars stack of Trevor Lawrence and Zay Jones. The duo combined for nearly 70 DKFP, nearly half of the team's total. All users who entered this contest must have owned a SlyCrocs NFT which can be purchased from the DraftKings Marketplace. This user also won SupDuck #9313 for first place in this contest. 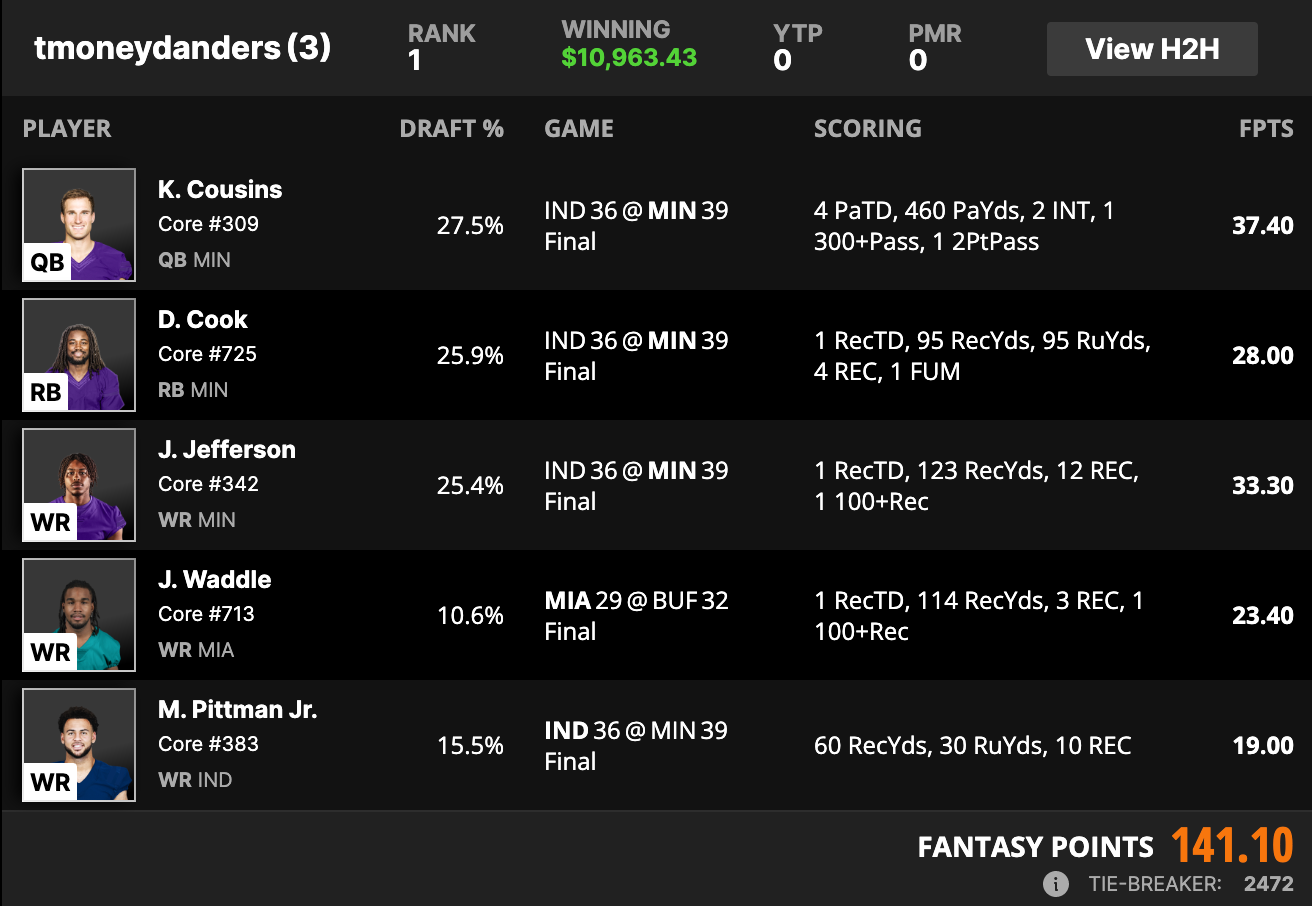 tmoneydanders won the CORE Pixel Vault contest by stacking up the Vikings’ offense and running it back with opposing wide receiver, Michael Pittman. This lineup finished with a three-way tie for first but tmoneydanders won by having the lowest cumulative serial number. This user won $10,000 and Inhabitant #5381. 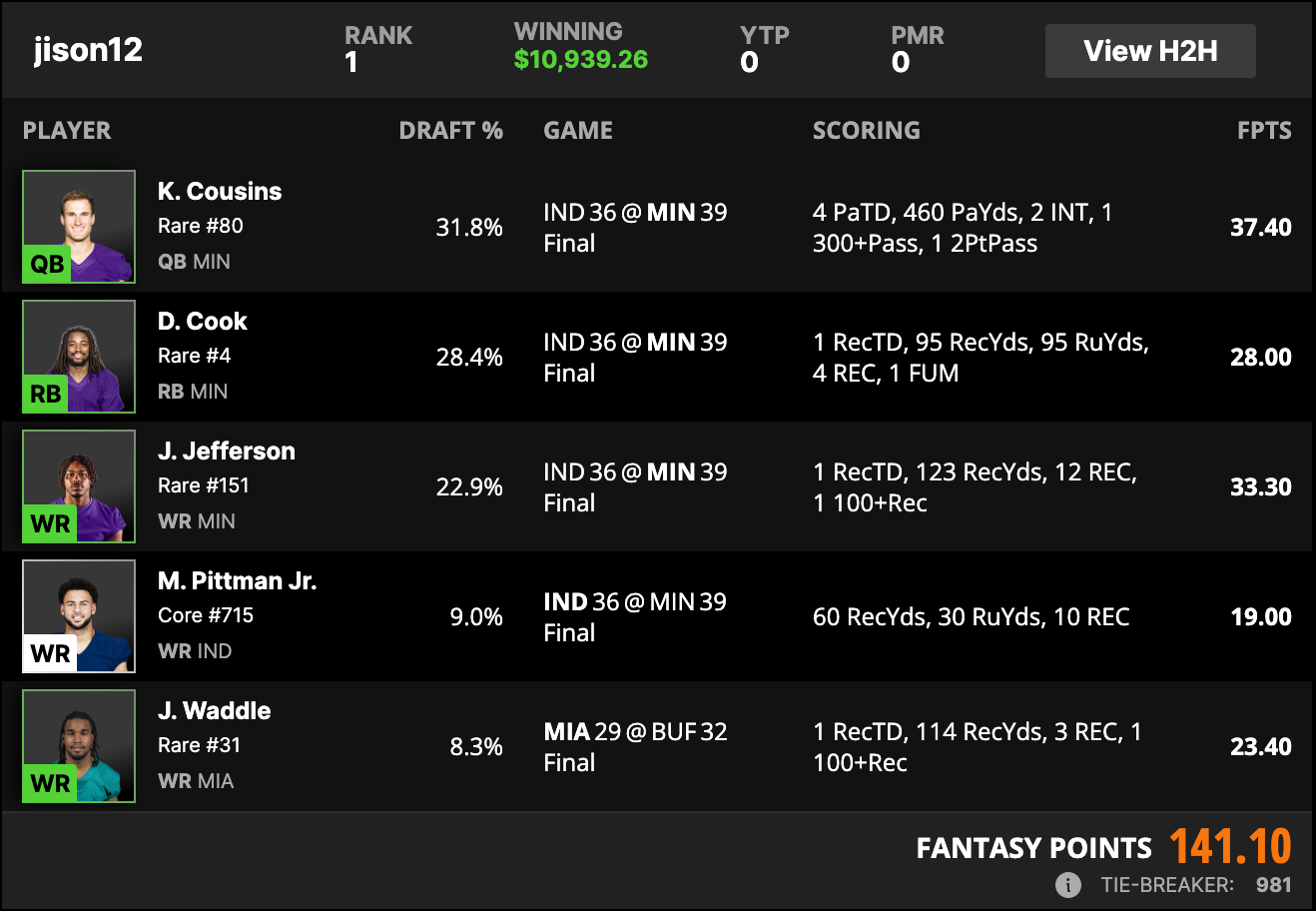 jison12 took down the Pixel Vault contest in the RARE tier with the same team that won the CORE contest, this time without utilizing the tiebreaker. In this field of 1190, jison12 won $10,000 and Inhabitant #637. The winner of the CORE Fiat Frenzy was xLUCKYNUTSx who stacked the Chiefs with A.J. Brown and Rhamondre Stevenson. McKinnon was only rostered on 1.9 percent of teams in this contest and delivered a masterful performance for the second straight week. I expect McKinnon's cards to soar in value before the Chiefs' Week 16 matchup against Seattle. Jalen Hurts and DeVonta Smith helped Taxman8 take down the largest RARE contest. Despite Hurts scoring all his touchdowns on the ground, both A.J. Brown and Devonta Smith had productive fantasy games through catches and yardage alone. Taxman8 won $10,000 for the victory in this contest. shalhoub23 took down the ELITE contest with another Eagles stack, this time with only Jalen Hurts and A.J. Brown. The Eagles’ passing attack has been rolling as of late, and these cards should be recycled for Week 16 when Philly takes on Dallas who just surrendered 318 passing yards and four touchdowns to Trevor Lawrence. shalhoub23 won the largest prize of the week with $100,000 in this contest. The winner of the LEGENDARY Fiat Frenzy was TimG10 who elected not to stack any team in this contest. This was the only winning team to play CeeDee Lamb, who finished as the No. 5 wide receiver. The Patriots' ugly loss to Las Vegas may have crushed the hopes of Stevenson's cards holding value into the postseason, however, the other four cards on this team are of players likely to see action once the regular season concludes. 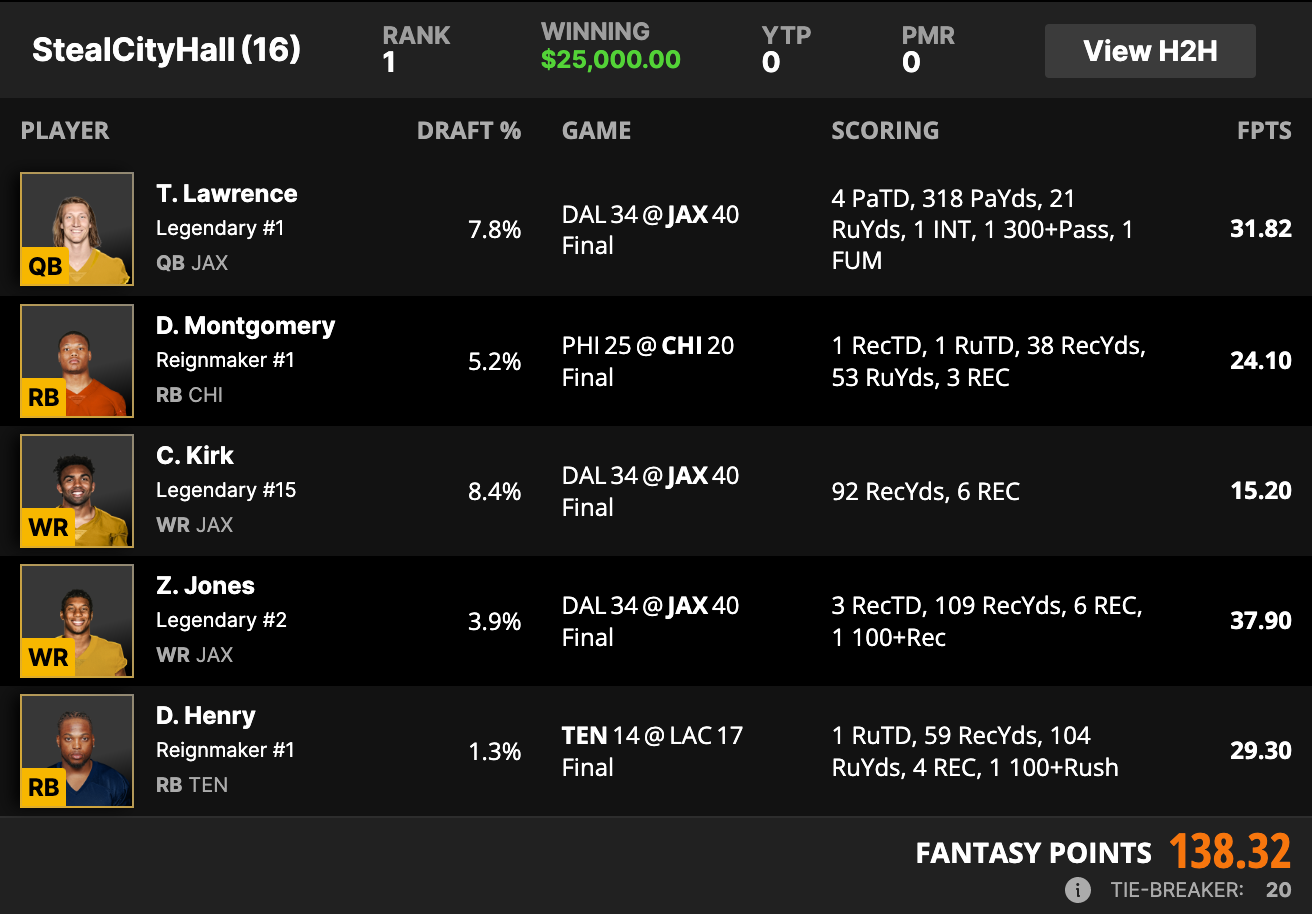 A repeat? StealCityHall once again won “The Alpha," this time double-stacking Trevor Lawrence with Zay Jones and Christian Kirk. StealCityHall was able to create a unique lineup construction with this team, opting to use a Derrick Henry SuperStar with the Jaguars double-stack and David Montgomery. Jacksonville cards are sneaky bets right now with the Jaguars still very much alive for first place in the AFC South.