In Week 17, the teams that rostered stacks of Tom Brady to Mike Evans sat atop the leaderboards. The 45-year-old veteran had by far his best game of the season, throwing for 432 yards and three touchdowns in a pivotal game for the NFC South title.

Mike Evans was on the receiving end of all three of Brady’s touchdowns, scoring 51.70 DKFP in an overall WR1 performance. With DJ Moore and Chris Godwin finishing as the WR6 and WR7, respectively, full-on game stacks of this game were squarely in play this week.

In the Aoki League, first place won $1,500 and the top four finishers won an exclusive Las Vegas experience at the poker table with Steve Aoki and friends.

Here is a look at the winning teams in Week 17: 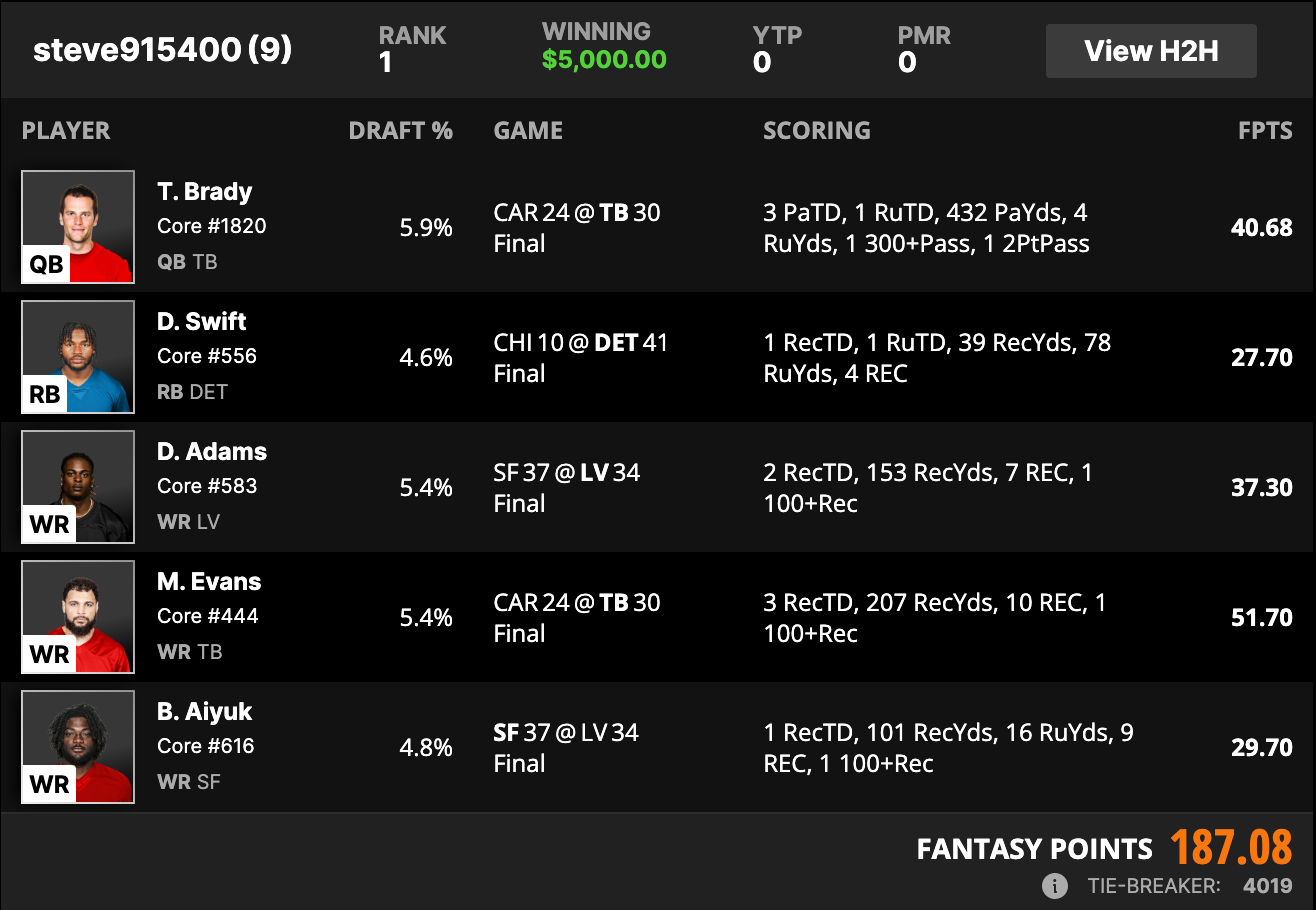 The winner of the CORE contest was steve915400 who had the perfect lineup construction. This was the only winning team to have less than three players from the Bucs/Panthers game. Davante Adams was the highest-scoring SuperStar, despite catching passes from backup quarterback Jarrett Stidham, who surprisingly finished as the overall QB3. Scoring a season-high 29.70 DKFP in an overtime win versus the Raiders, Brandon Aiyuk was the unlikely piece that made this team perfect. 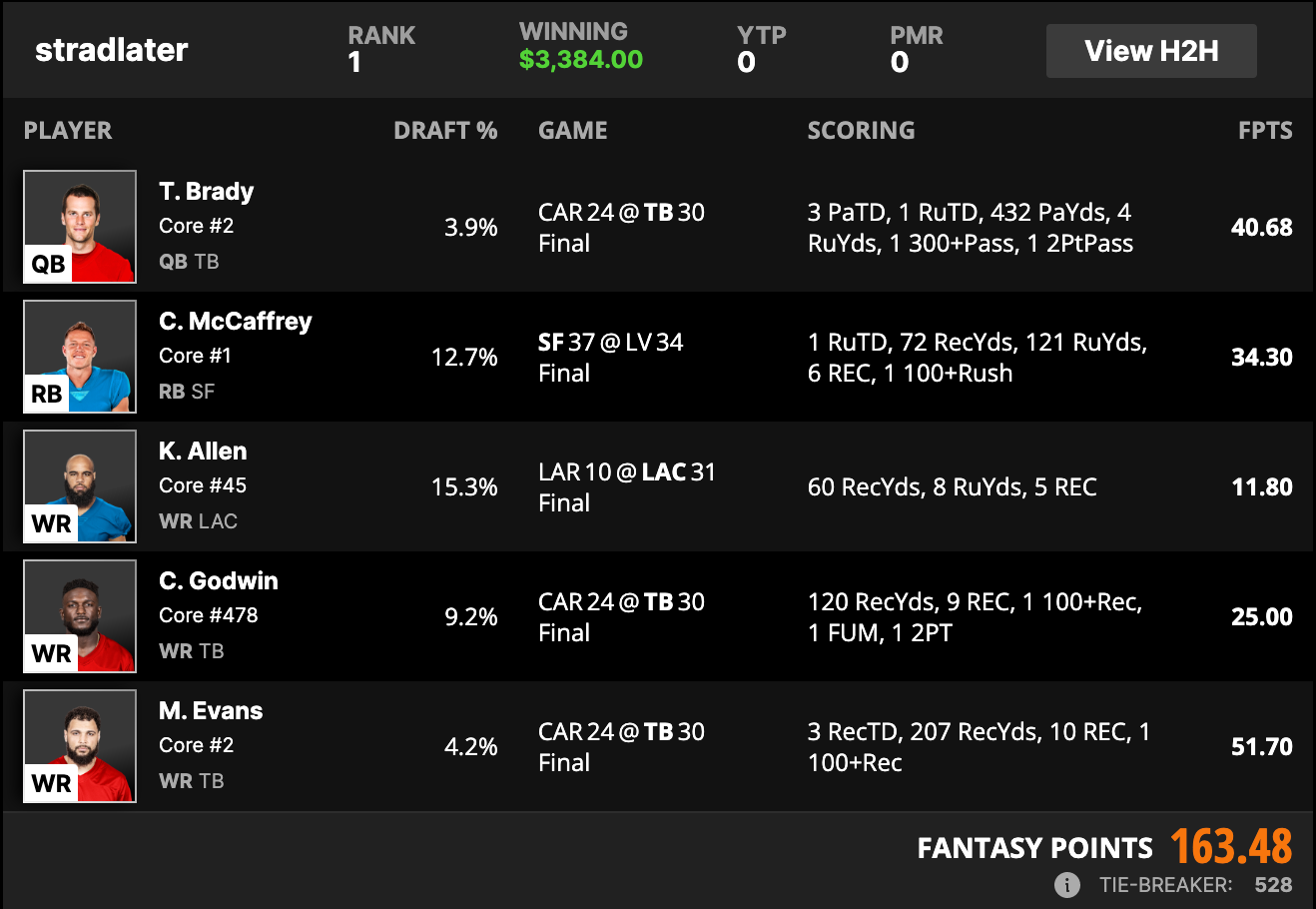 DraftKings user "stradlater" won the SlyCrocs League this week with a Brady double-stack, Christian McCaffrey, and Keenan Allen. For this win, stradlater won $3,000 cash, SupDuck #5477, and a special 1:1 original NFT from the MegaVolt team. SupDucks have a floor price of 0.15 ETH at the time of writing according to their rarity page on Lucky Trader. 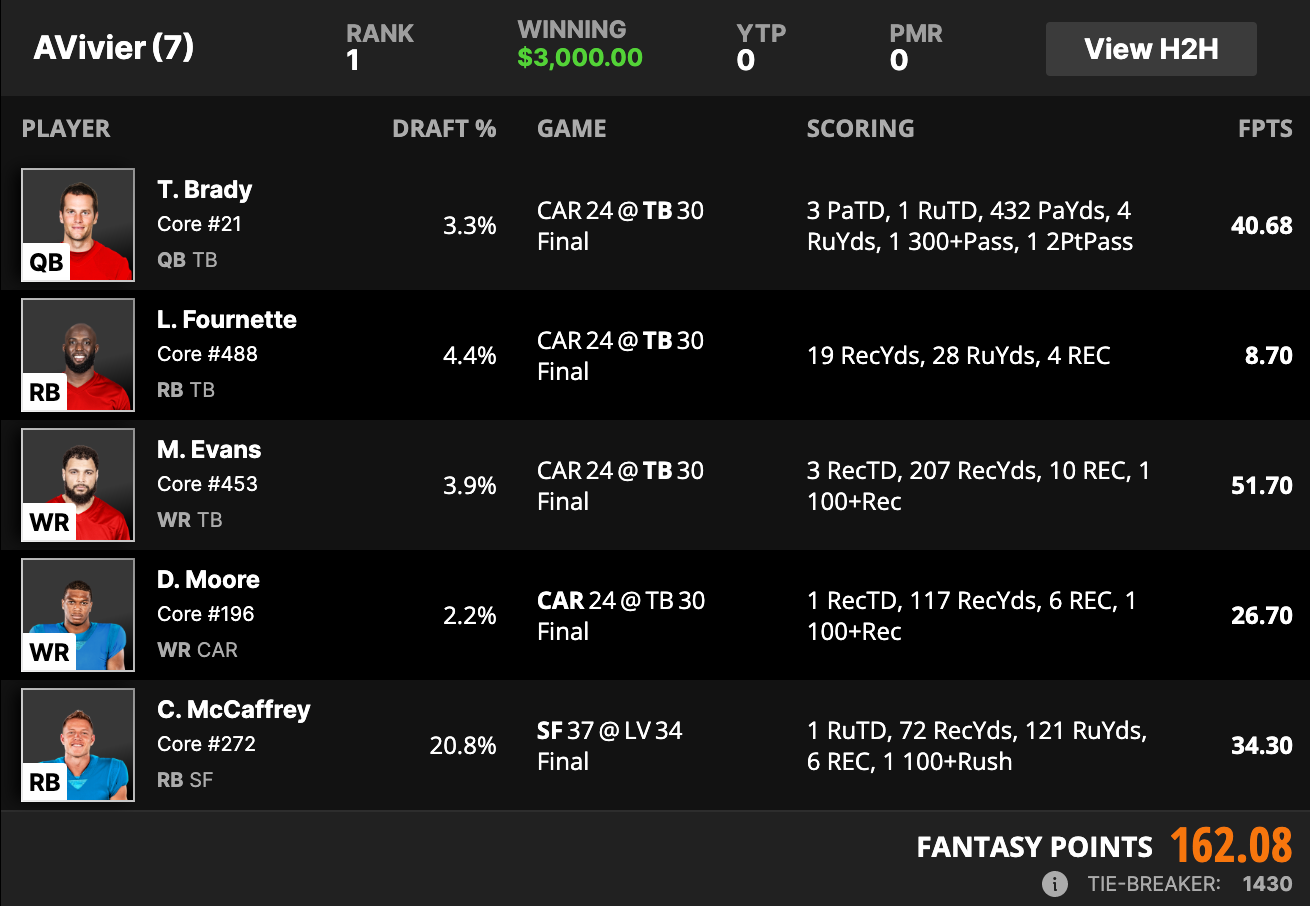 AVivier won first and second place in the Aoki All-Star Championship with the same lineup. This user won $5,250 for both finishes, as well as two seats at the poker table with Steve Aoki and friends. The top four finishers in this contest won entries to the poker game that has an estimated date of Feb. 25. 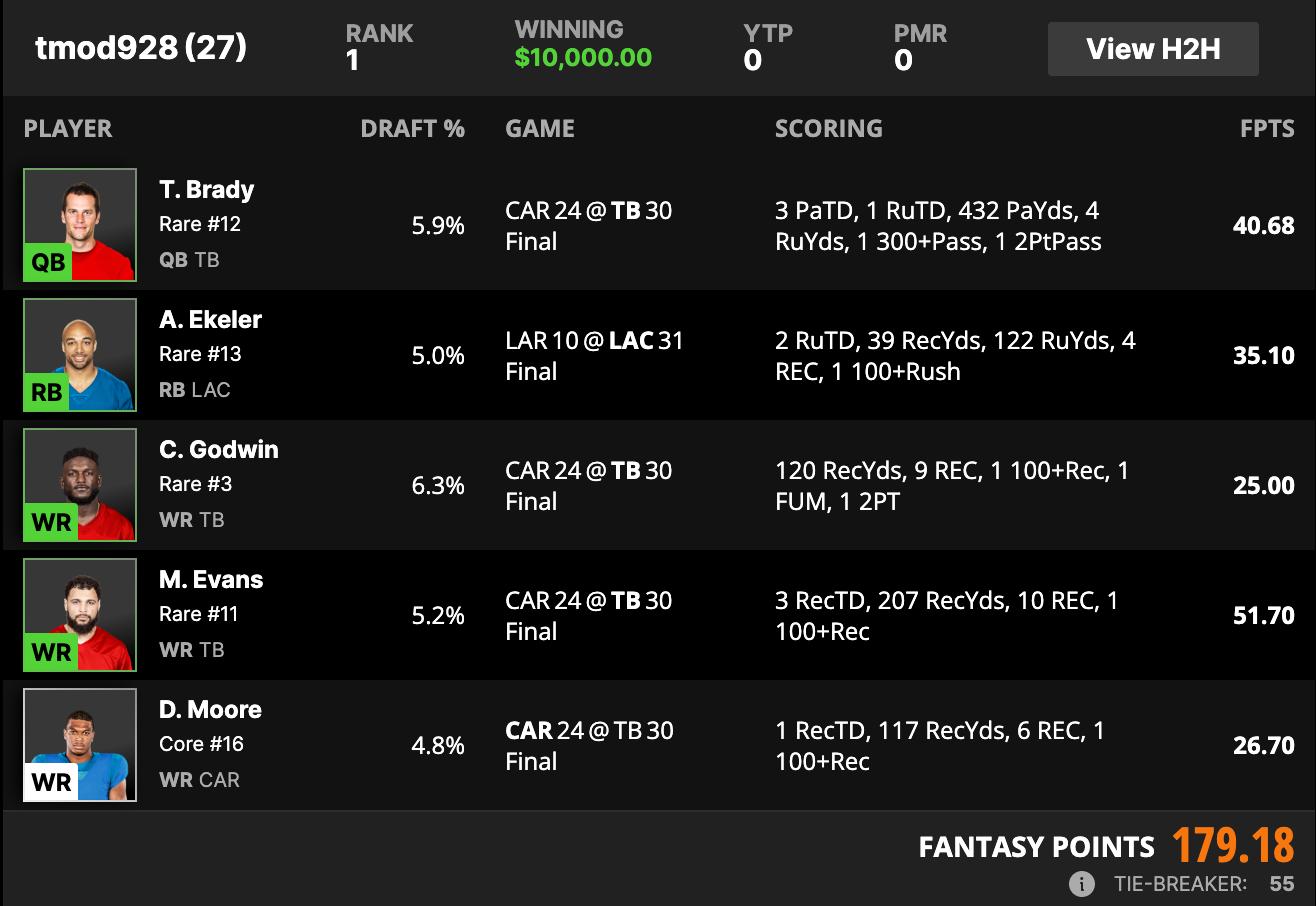 The winner of the RARE contest was tmod928 who won this contest via tiebreaker. This user had a massive advantage with a cumulative serial number of 55 compared to 1831 of the team in second. Among the five players, no card had a serial number less than No. 16. tmod928 ultimately took it down with four players from the Bucs/Panthers game. 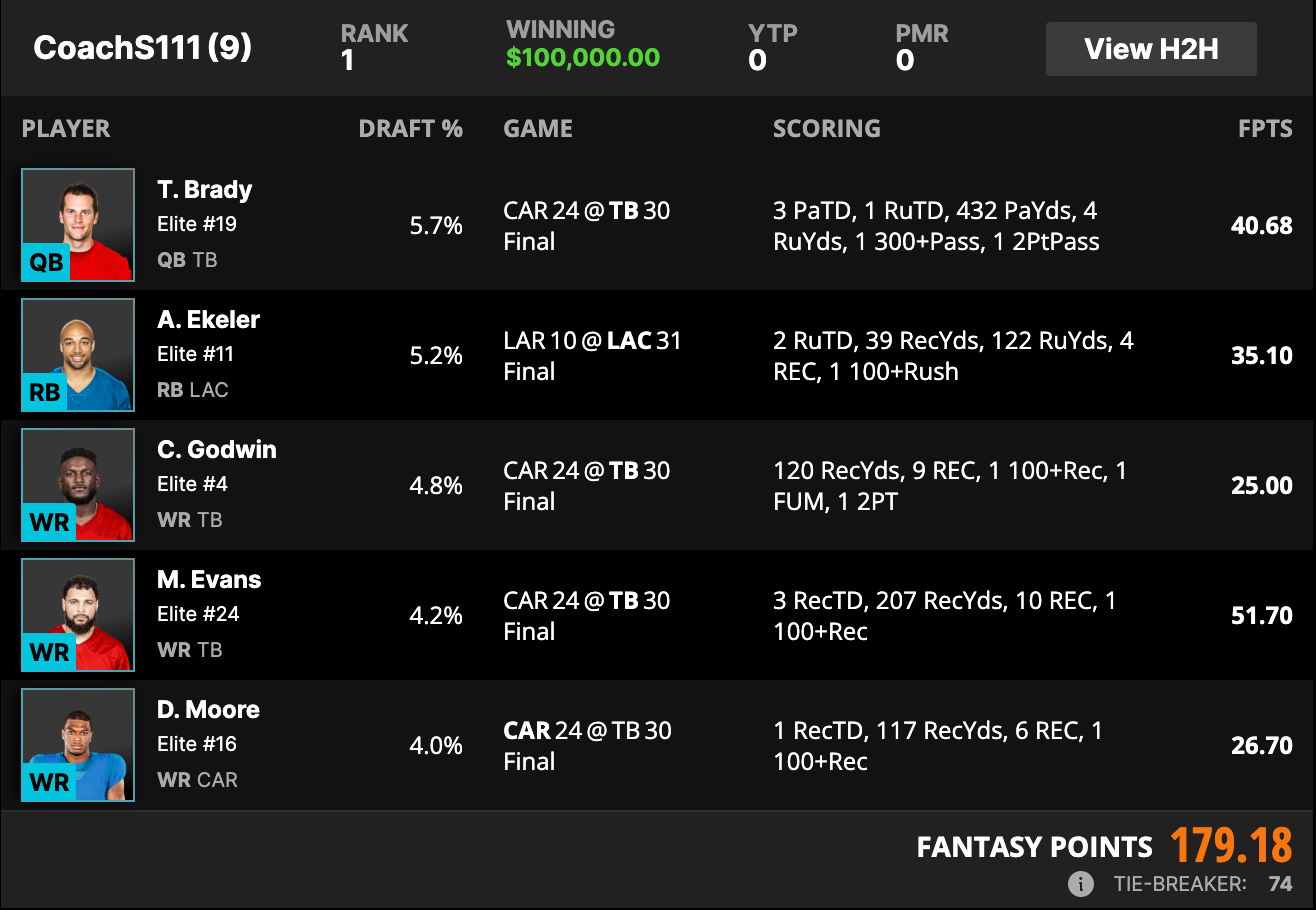 The winner of $100,000 at the ELITE tier was CoachS111. Another Brady double-stack with a DJ Moore bring-back. This team also won using five ELITE cards despite four being the minimum requirement. Bucs cards now hold value into at least the first round of the playoffs with Tampa Bay securing a playoff berth this week. 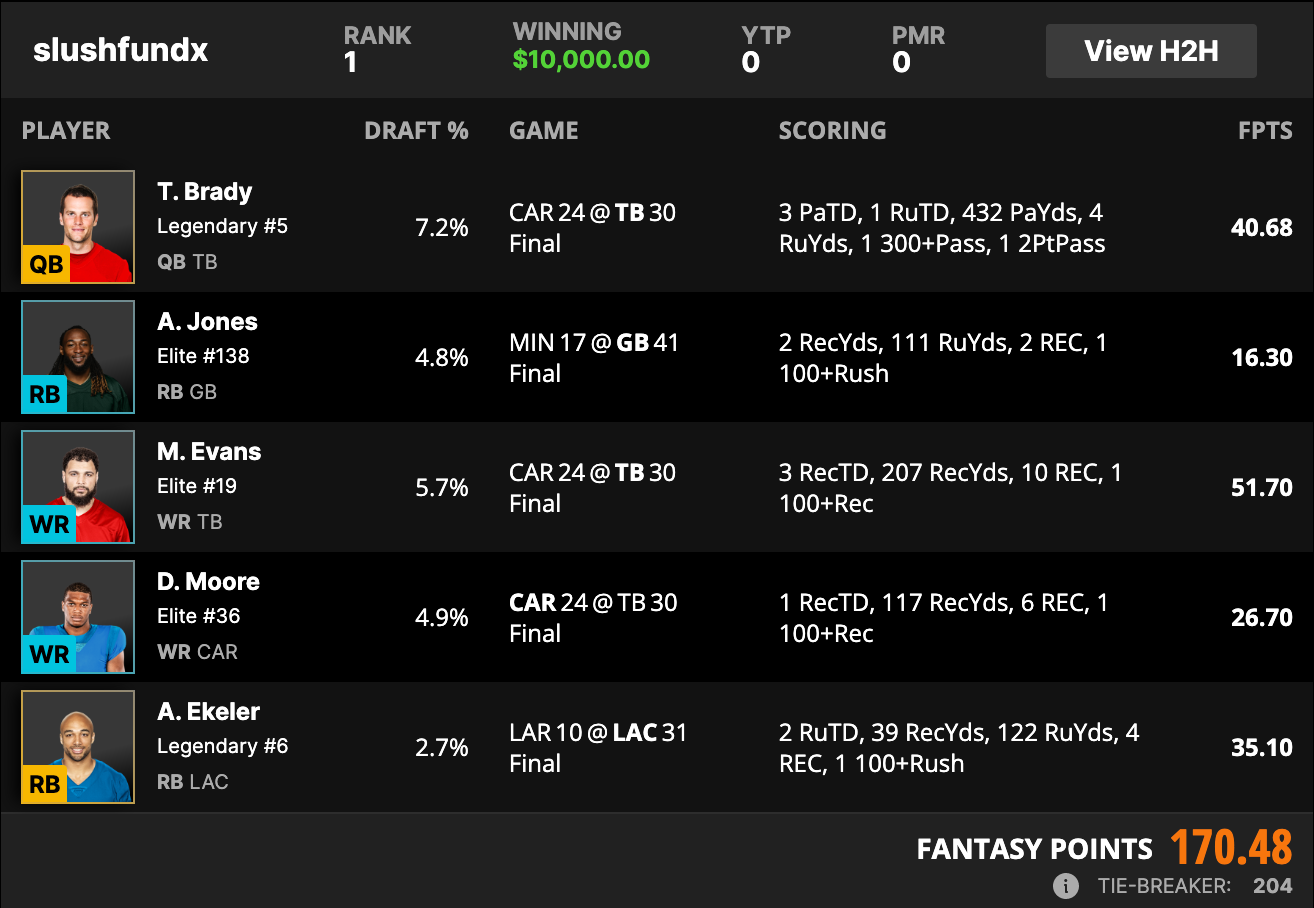 slushfundx won the LEGENDARY contest this week with a similar team to the RARE and ELITE winners, with Aaron Jones over Chris Godwin as the lone exception. In this field of 925, slushfundx took down $10,000 for first place. 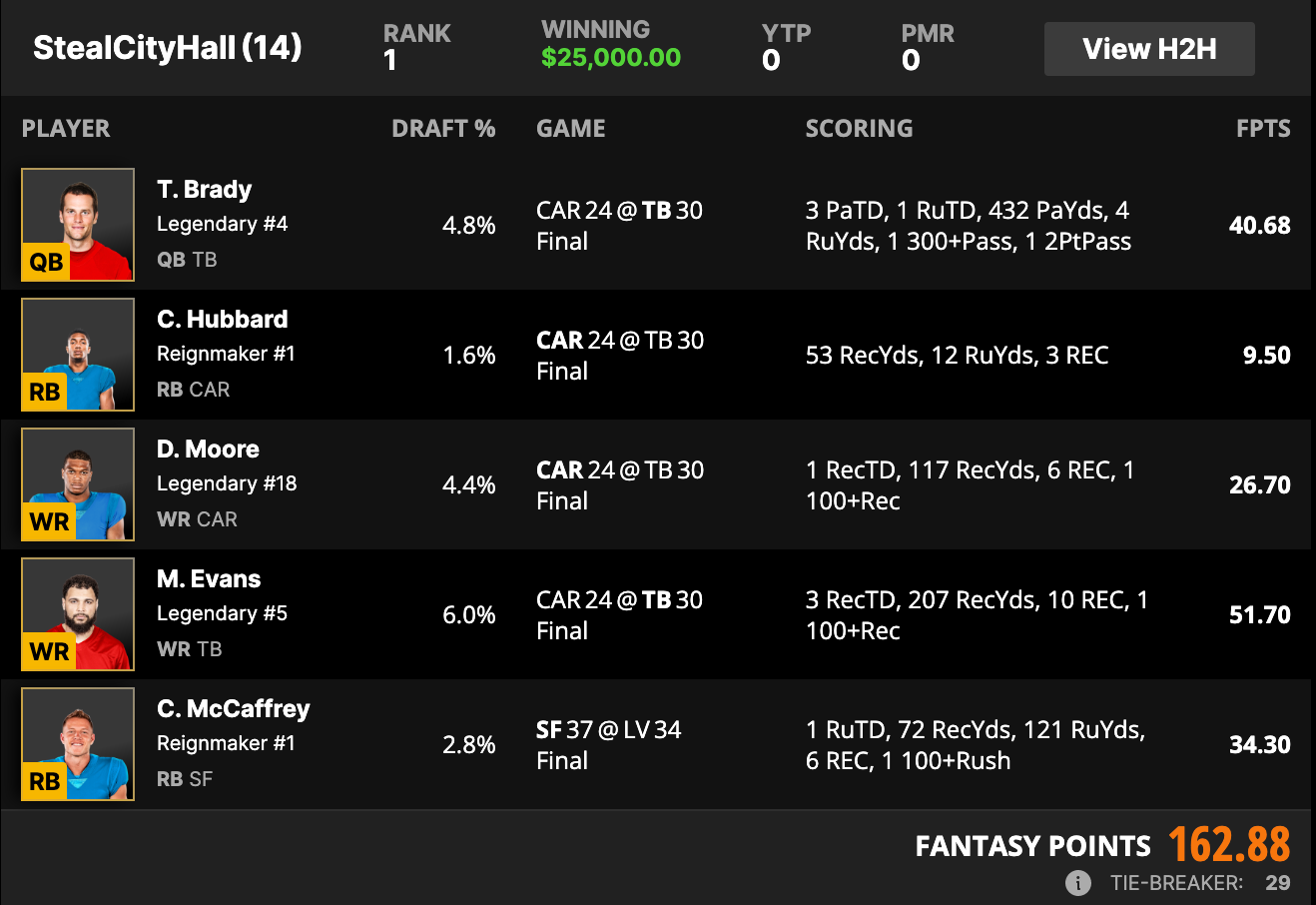 The winner of “The Alpha” at the REIGNMAKER tier was StealCityHall. This user adds to their list of “The Alpha” titles with a four-man stack of the Bucs game, despite Chuba Hubbard's 9.50 DKFP. This user secured $25,000 for the victory.