On a week with teams resting their starters, players looking to earn last-minute contract incentives, and certain teams motivated to lose, the Week 18 Reignmakers slate saw several low-scoring and unique teams at the top of the leaderboards.

The perfect lineup this week was Davis Mills, Zack Moss, Keenan Allen, Jerry Jeudy and Stefon Diggs. It was the first time all season that Mills was on a winning team, as the Texans’ quarterback surprisingly finished as the overall QB1 in a game where Houston could have earned the first pick in the draft with a loss. The Texans narrowly beat the Colts 32-31.

Keenan Allen finished as the WR1 despite the game having no meaning for the Chargers. The veteran wideout had a season-best 8-102-2 receiving line.

Now with less than half the teams moving on to the postseason, Reignmakers players will have to make some tough decisions on which cards can maintain value up until the Super Bowl. I expect to see market activity shift towards teams without a first-round bye and those with the best playoff odds such as the Bills, Bengals and 49ers.

Here is a look at the winning teams in Week 18: 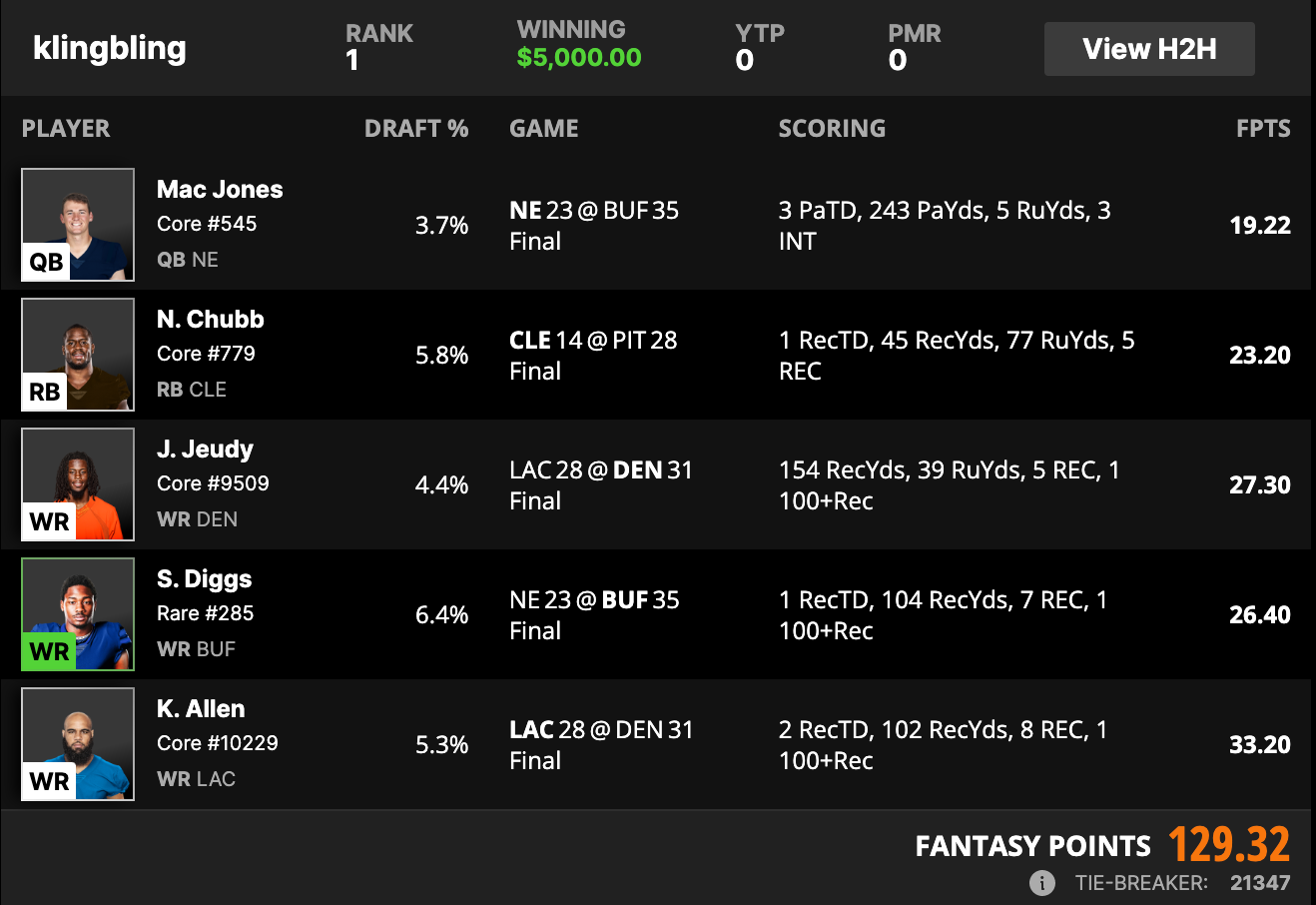 The winner of the CORE contest this week was klingbling who had the highest score of the week, racking up 129.32 DKFP. This user had the highest-scoring SuperStar of the week in Nick Chubb, however, the Browns’ running back still would not have cracked the perfect construction. Mills over Mac Jones and Moss over Chubb would have made this team perfect. Among these five players, only Diggs and Allen will hold value into the postseason. 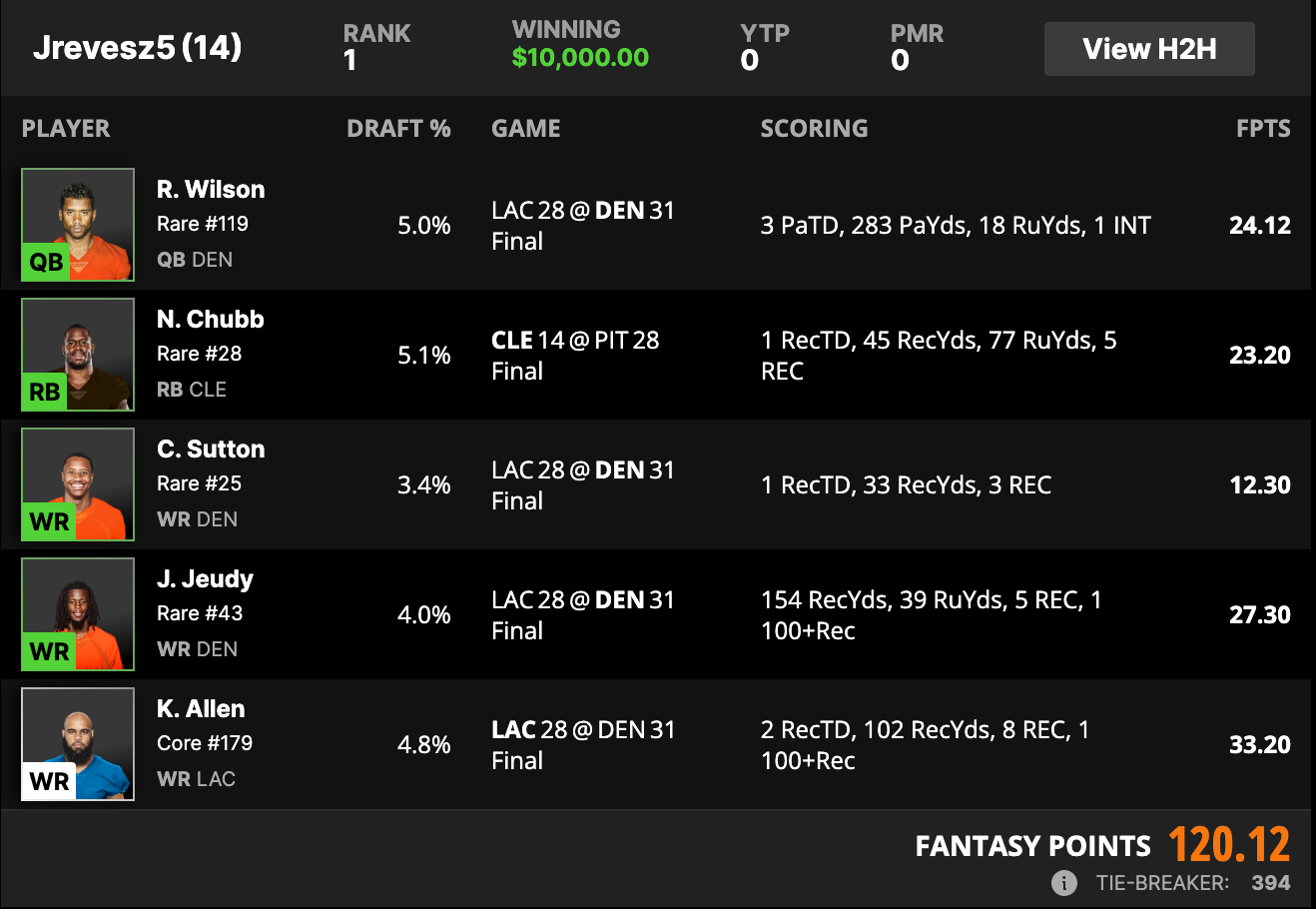 Jrevesz5 won the RARE contest with a Broncos double-stack and a Keenan Allen bring-back. Russell Wilson finished as the overall QB2 after closing out his disappointing first-year campaign with Denver on a high note. This user took down the $10,000 prize for this first-place win. 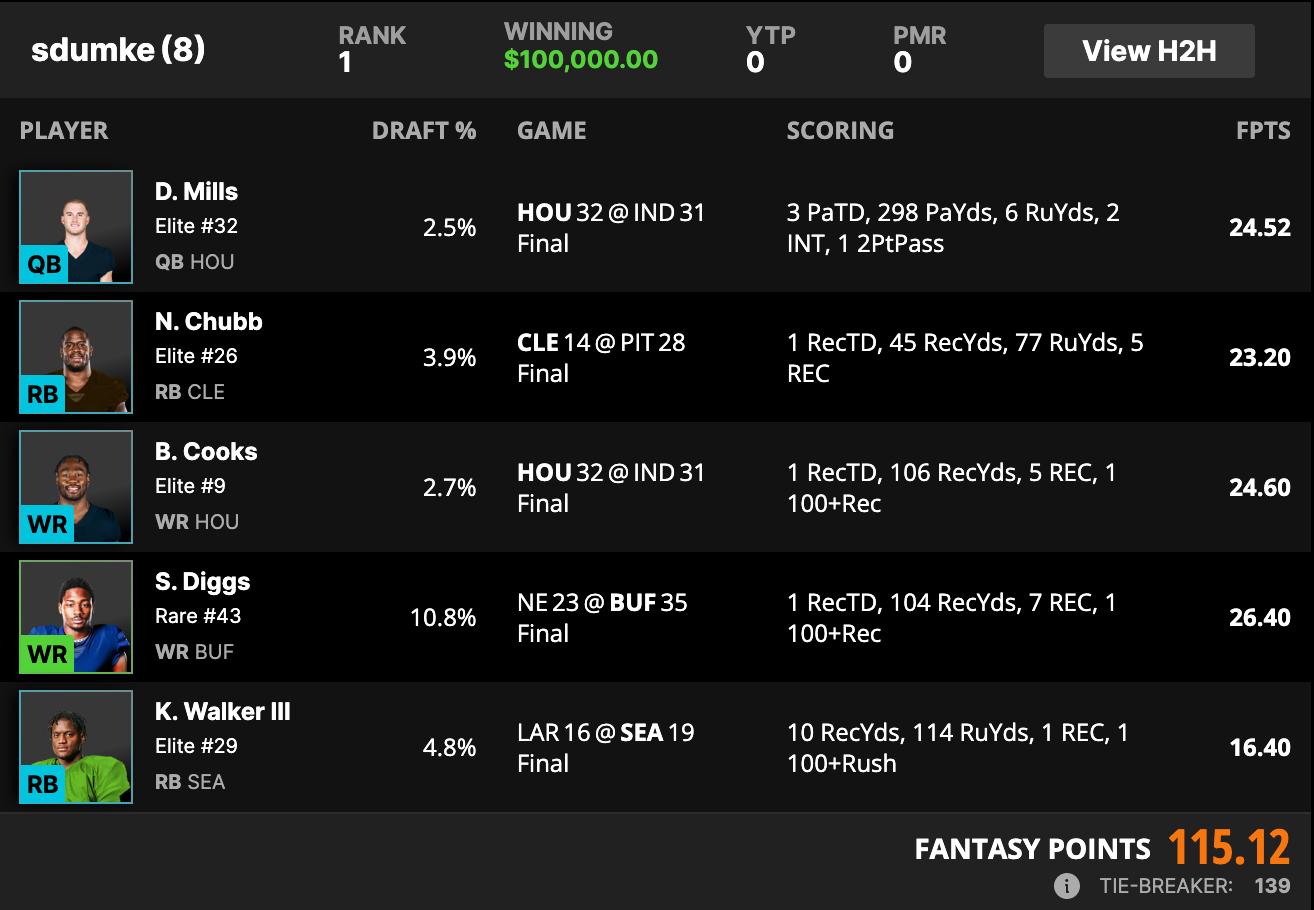 The winner of $100,000 in the ELITE Fiat Frenzy was sdumke. Despite not showcasing much upside all season, the Mills-Cooks stack came through in a big way this week. The Colts’ passing defense had been stout throughout the year, but an indoor game between two teams with nothing to play for produced the most overall fantasy points this week. Both the Diggs RARE and Kenneth Walker ELITE cards can be used in postseason contests next week. 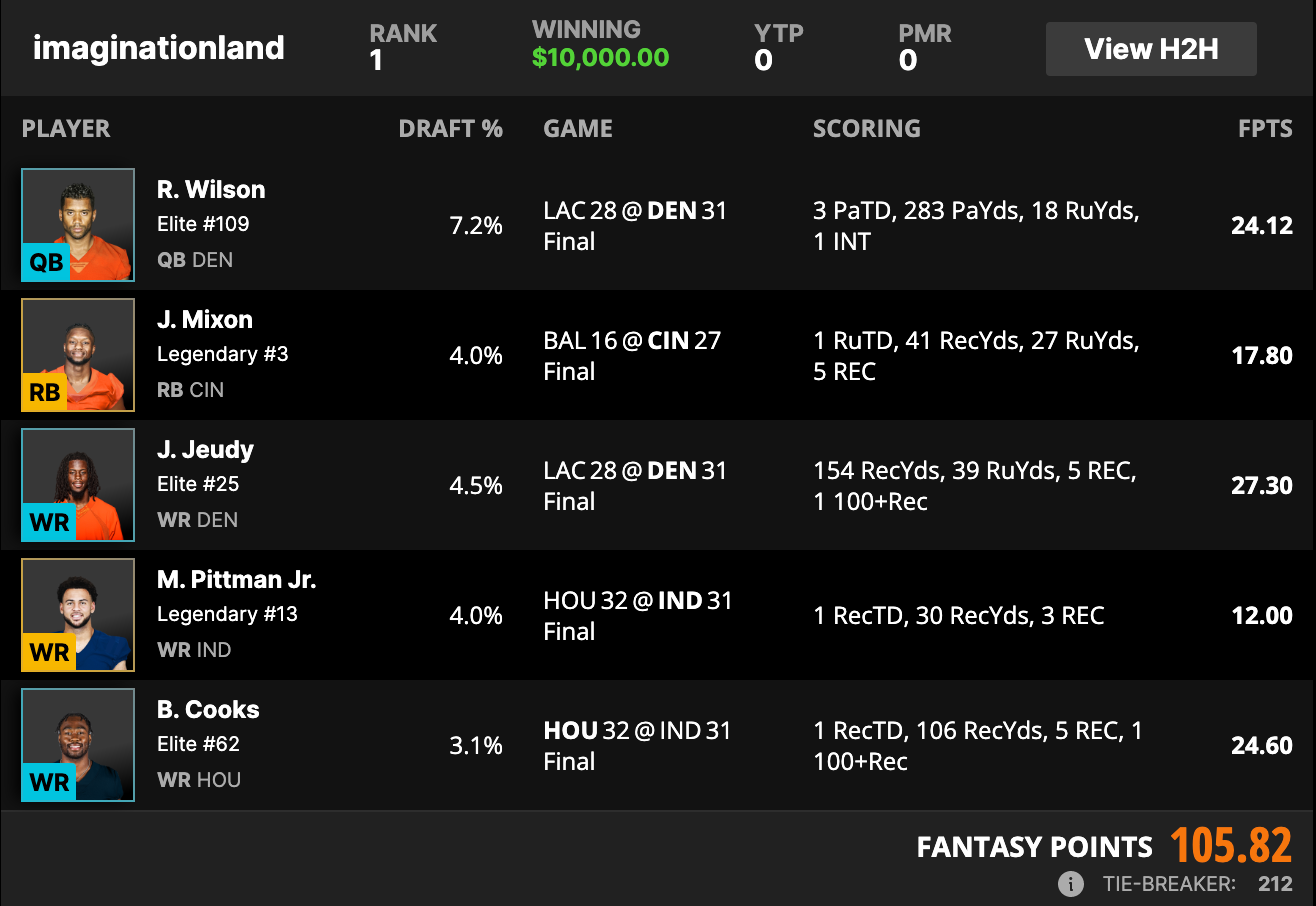 imaginationland narrowly took down the LEGENDARY contest this week by 0.2 DKFP with another Wilson-Jeudy stack. This was the only winner to roster both Joe Mixon and Michael Pittman. Mixon’s Reignmakers cards could increase in value preceding this same matchup versus Baltimore on Wild Card Weekend. Early lines on the DraftKings Sportsbook have the Bengals as 6.5-point favorites. 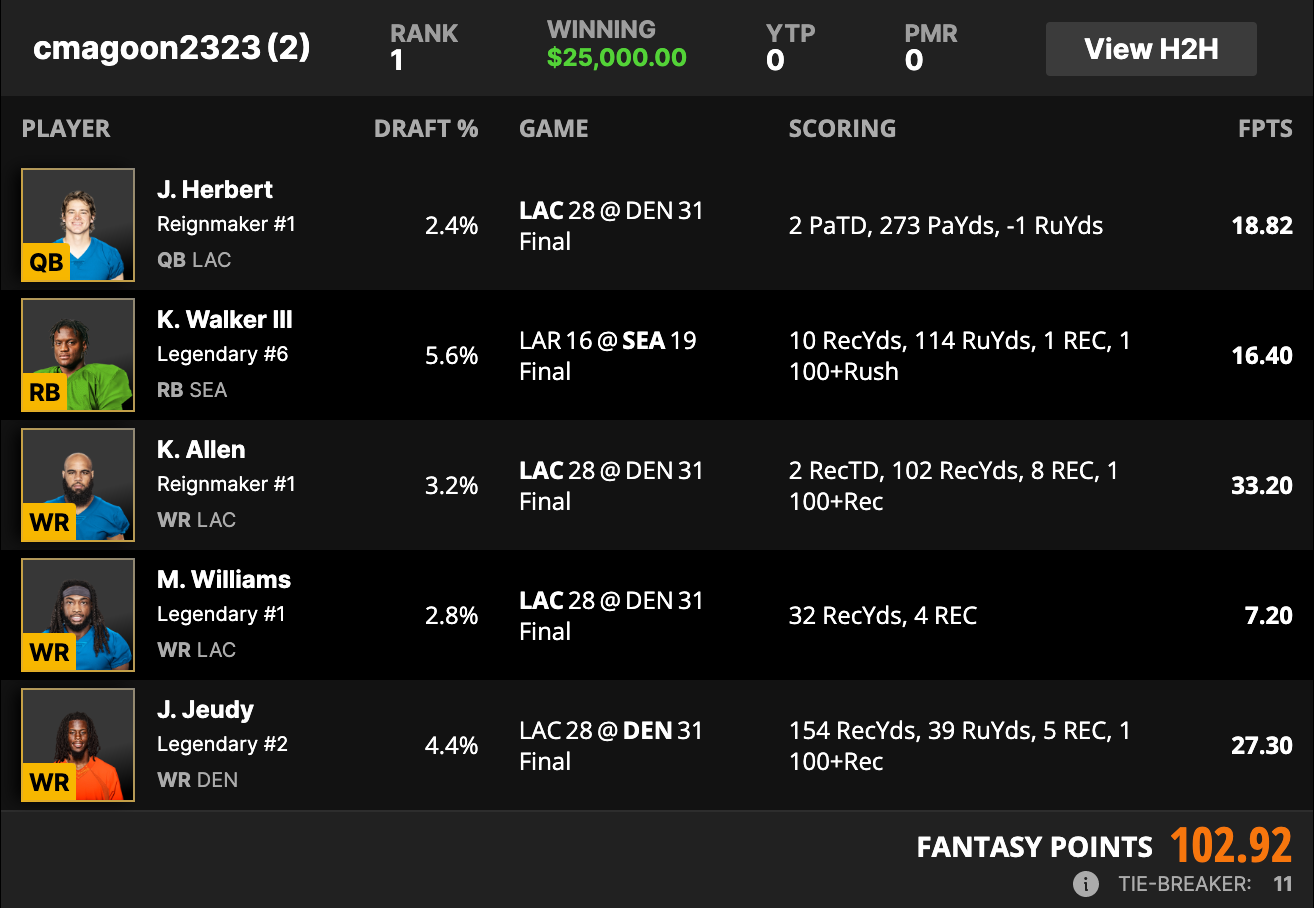 The winner of “The Alpha” was cmagoon2323 who rostered a Justin Herbert double-stack with a Jeudy bring-back. This team also had Kenneth Walker who, despite being one of the most clear-cut running back plays this week, finished as the overall RB13 with a modest 16.4 DKFP. The Chargers’ cards can be recycled optimistically into their enticing playoff matchup against the Jaguars next weekend. Everyone on this team besides Jeudy is done for the year.