On Saturday, it was those who rostered Brock Purdy that found the most success, as the rookie led San Francisco to a dominant 41-23 win over Seattle.

Although the Jaguars’ impressive comeback win over the Chargers was one of the most exciting games to watch this weekend, it was the former game that supplied most of the fantasy relevance. DK Metcalf, Brock Purdy and Deebo Samuel all finished top four in overall scoring.

Sunday featured an additional game of players to choose from, and this time it was Reignmakers players who elected to go with Daniel Jones that finished best. The Giants’ quarterback finished as the QB1 on Sunday in New York’s upset of the Vikings in Minnesota.

The Dolphins/Bills game maintained a tight score up until the end, largely on the back of an impressive showing from the Miami defense rather than rookie quarterback Skylar Thompson.

And finally, in one of the least-competitive games of Wildcard Weekend, Dallas defeated Tampa Bay in a game that saw Dak Prescott finish as the highest-scoring player at any position. The win sends the Cowboys to San Francisco next week in what should be an exciting matchup.

Here is a look at the winning teams from Wildcard Weekend: 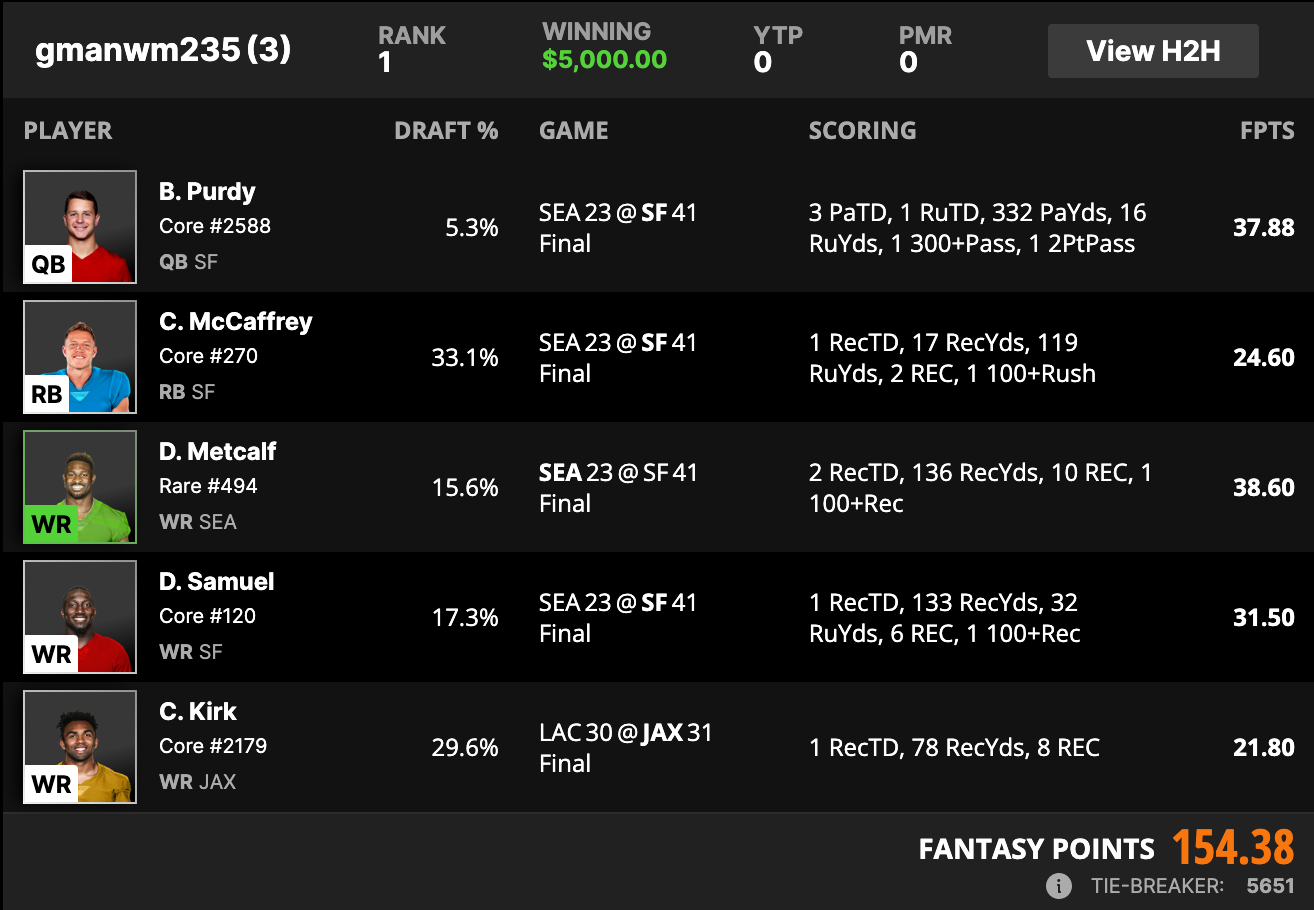 The winner of the CORE Fiat Frenzy was gmanwm235 who scored 154.38 DKFP with a game stack of the Seahawks/49ers. Although he showcased a lack of fantasy upside prior to this game, Brock Purdy dominated with 332 yards and four total touchdowns at only 5.3 percent ownership. The only thing keeping this lineup from being perfect was Christian Kirk instead of Gerald Everett. 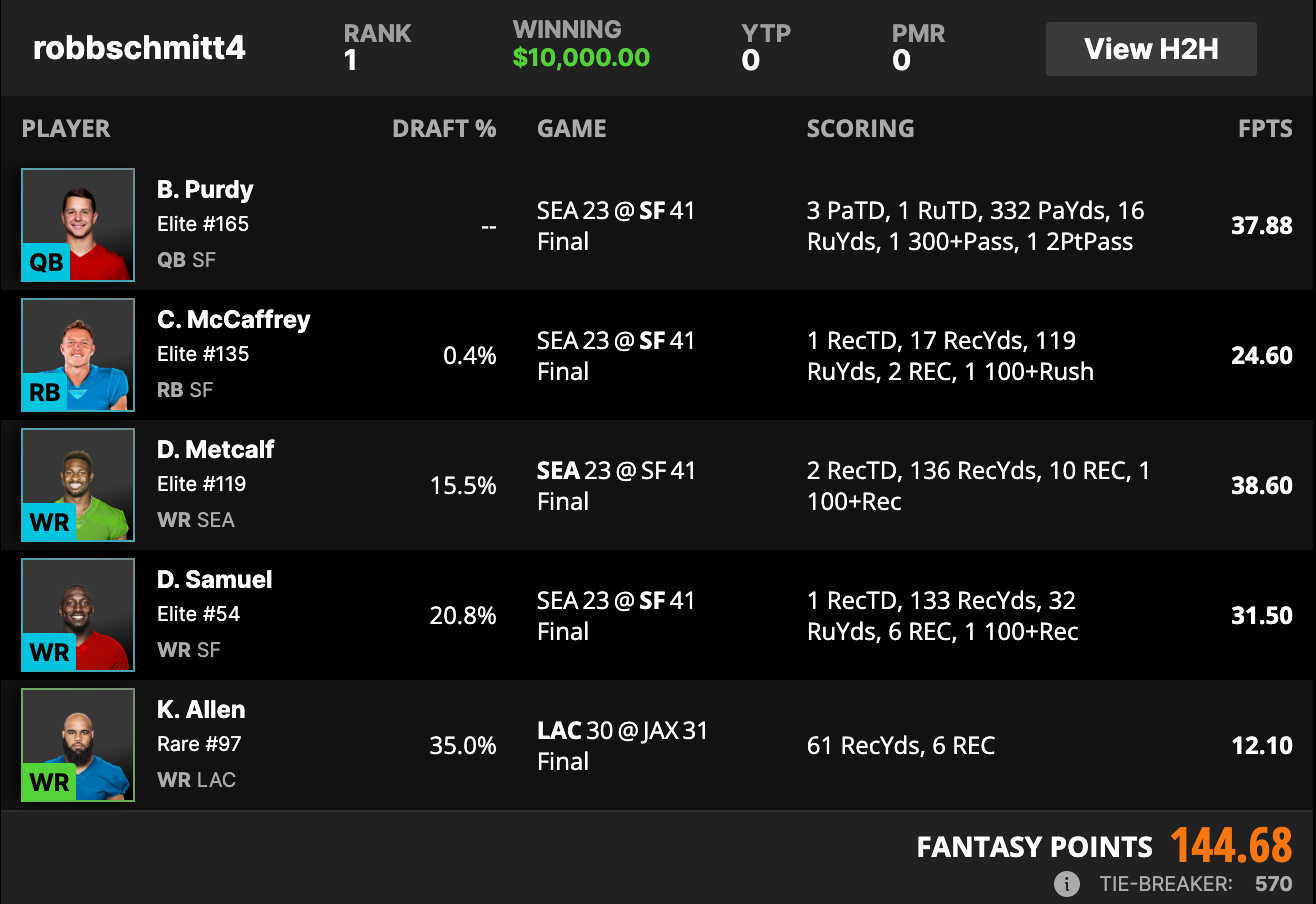 Robbschmitt4 won the ELITE contest on Saturday for $10,000 with the same lineup as the CORE with one exception - Keenan Allen over Christian Kirk.  Allen disappointed despite the absence of fellow wideout Mike Williams in this game. Unfortunately for this user, Allen can’t be used next weekend with the Chargers losing to Jacksonville by just one point. 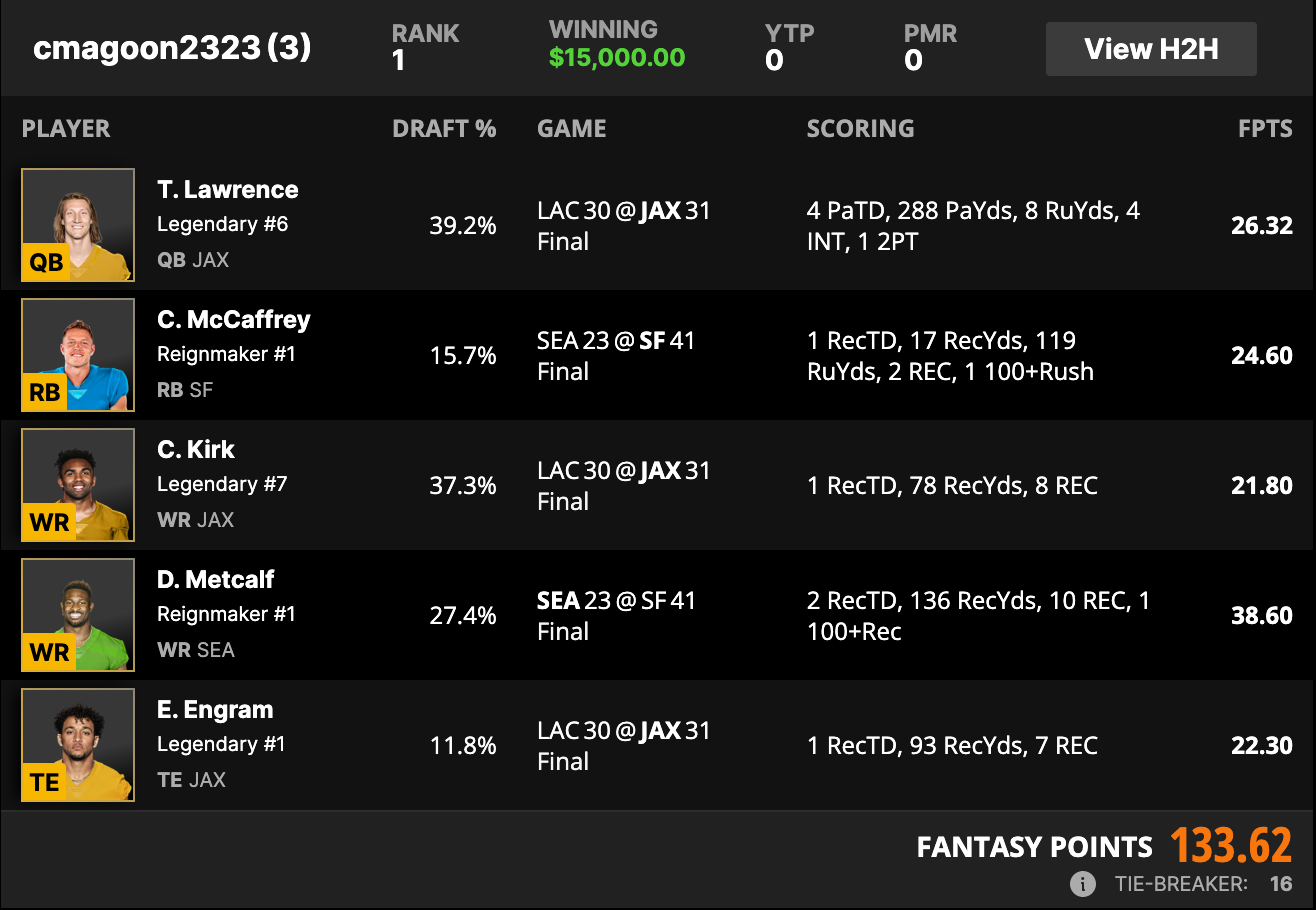 Cmagoon2323 secured the win in the REIGNMAKER contest on Saturday with a Jaguars double-stack. It’s interesting to note that almost no one rostered Purdy in this contest as a result of him having only one set of LEGENDARY cards and no REIGNMAKER cards available in the DraftKings Marketplace. These three Jaguars can be used next weekend, however, it will be a tall task as Jacksonville travels to Arrowhead to face Patrick Mahomes and the Chiefs. 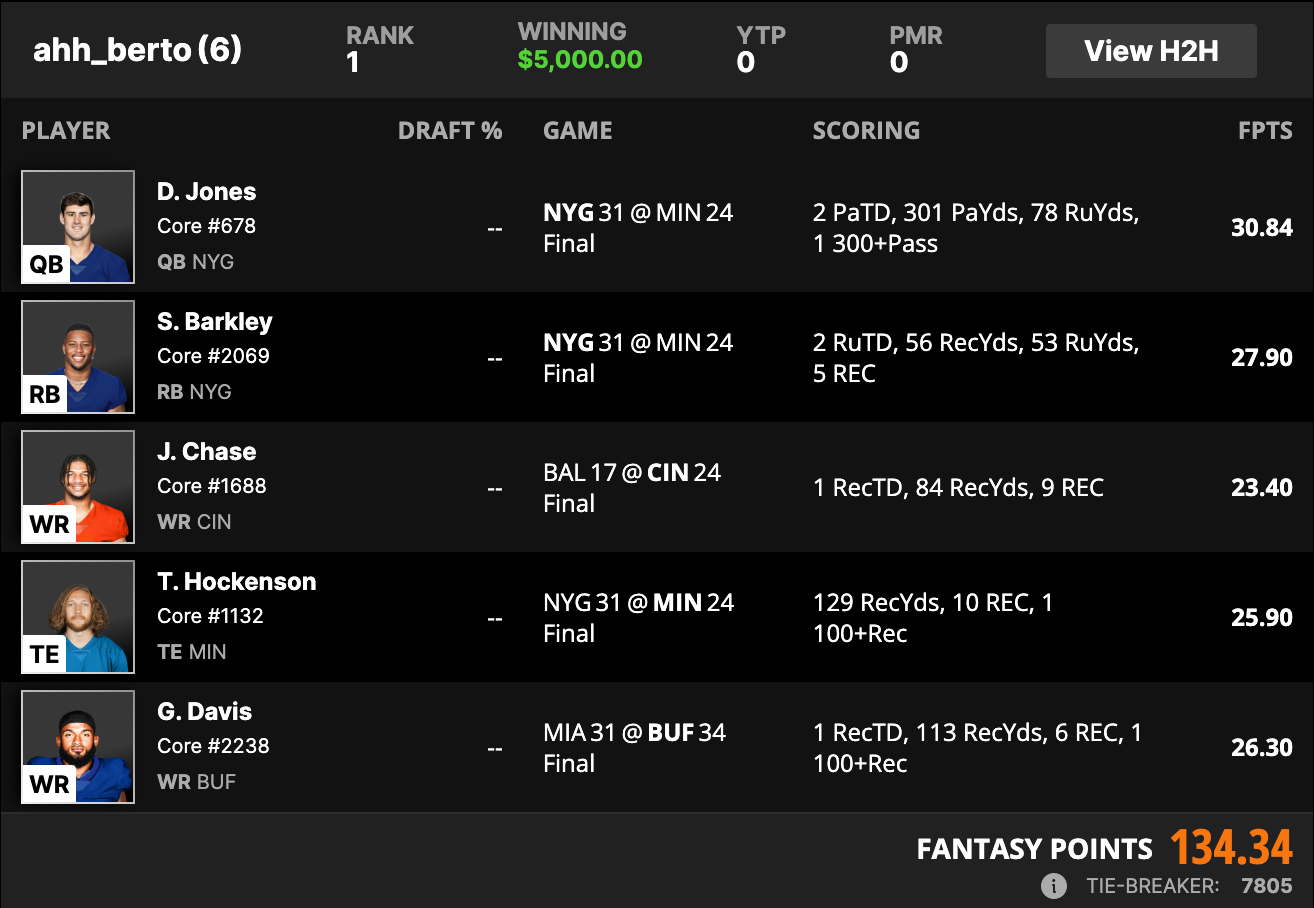 The winner of the CORE Fiat Frenzy on Sunday was ahh_berto who stacked Daniel Jones with Saquon Barkley. A key player for this team was Gabriel Davis who despite being cold over the last couple of months in fantasy, popped off as the WR2 on Sunday. Jones outscored Josh Allen by about 2 DKFP despite the latter being the much-preferred option amongst Reignmakers players. 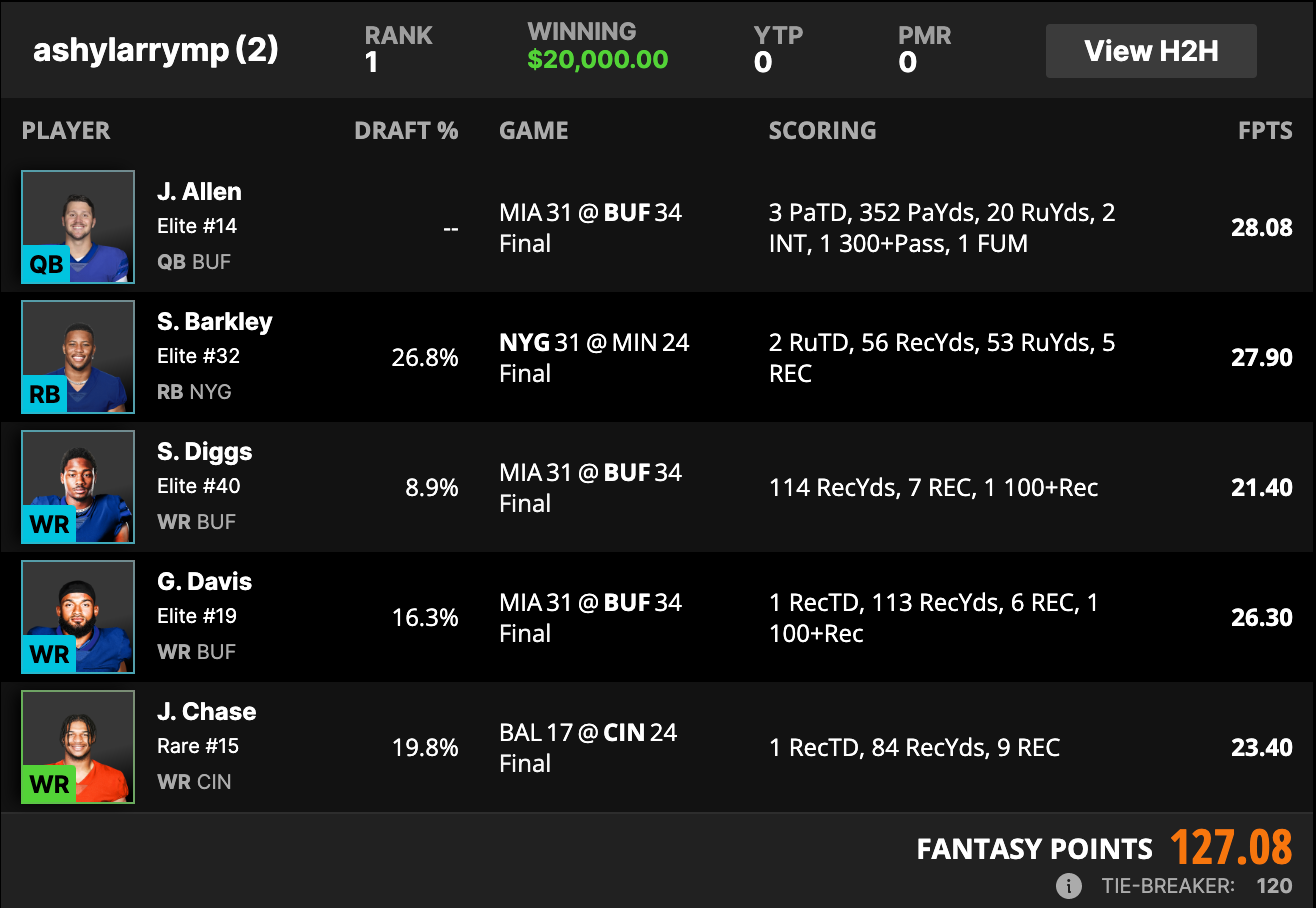 Ashylarrymp won the ELITE contest with a Josh Allen double-stack with Stefon Diggs and Gabriel Davis. It is surprising to see Davis with almost double the ownership of Diggs in this contest although per the DraftKings Marketplace, Davis ELITE cards are about one-third the price of Diggs ELITE cards. All five of these cards can be recycled into the Divisional round. 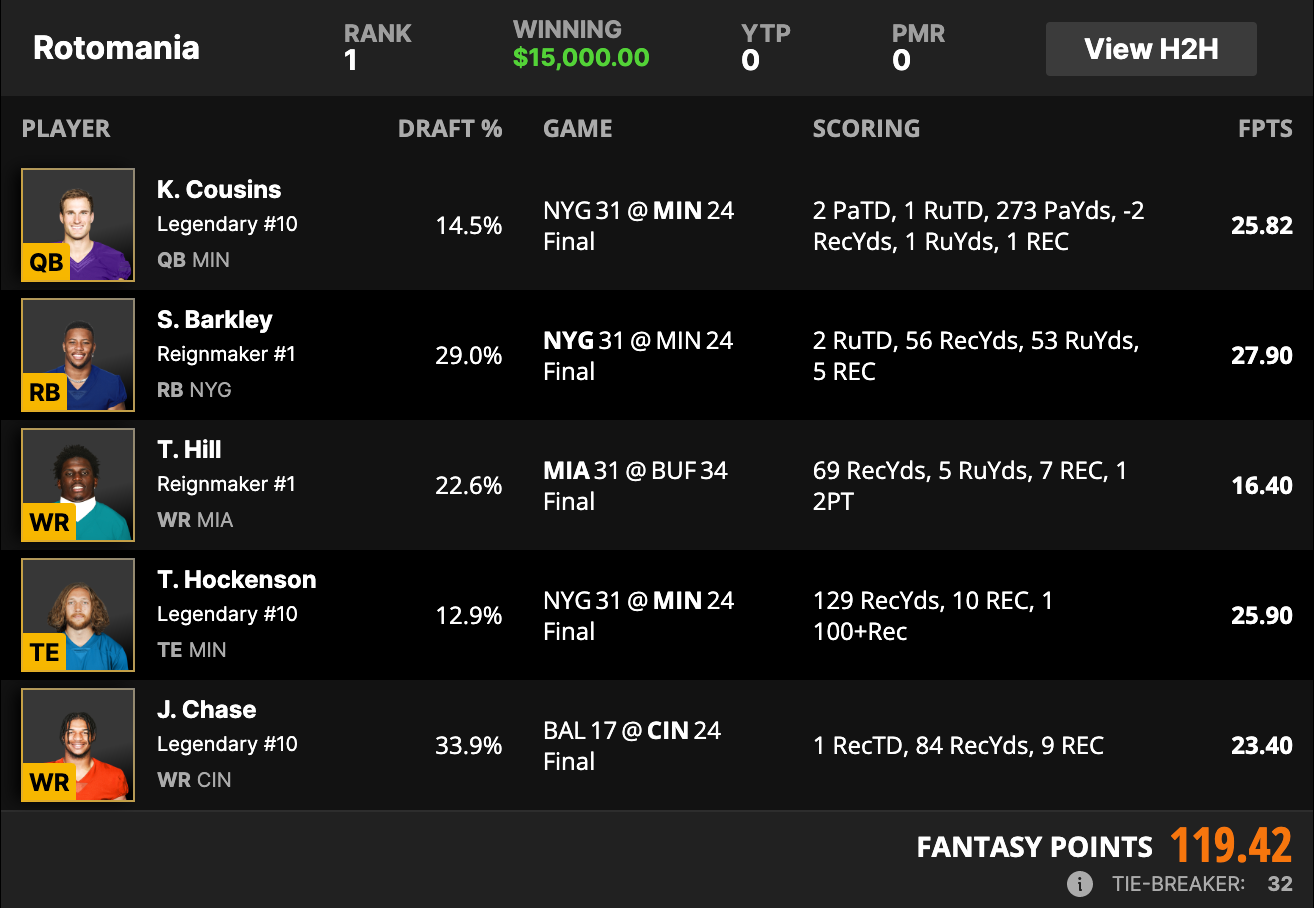 Rotomania bested a field of 62 to take down “The Alpha” on Sunday. The Kirk Cousins-TJ Hockenson duo was a solid pairing despite the Vikings’ loss. The Barkley Reignmaker card should pay dividends for Rotomania next weekend where since there doesn’t appear to be much competition at the running back position for non-SuperStars. Unfortunately Cousins, Hockenson and Hill are all done for the year. 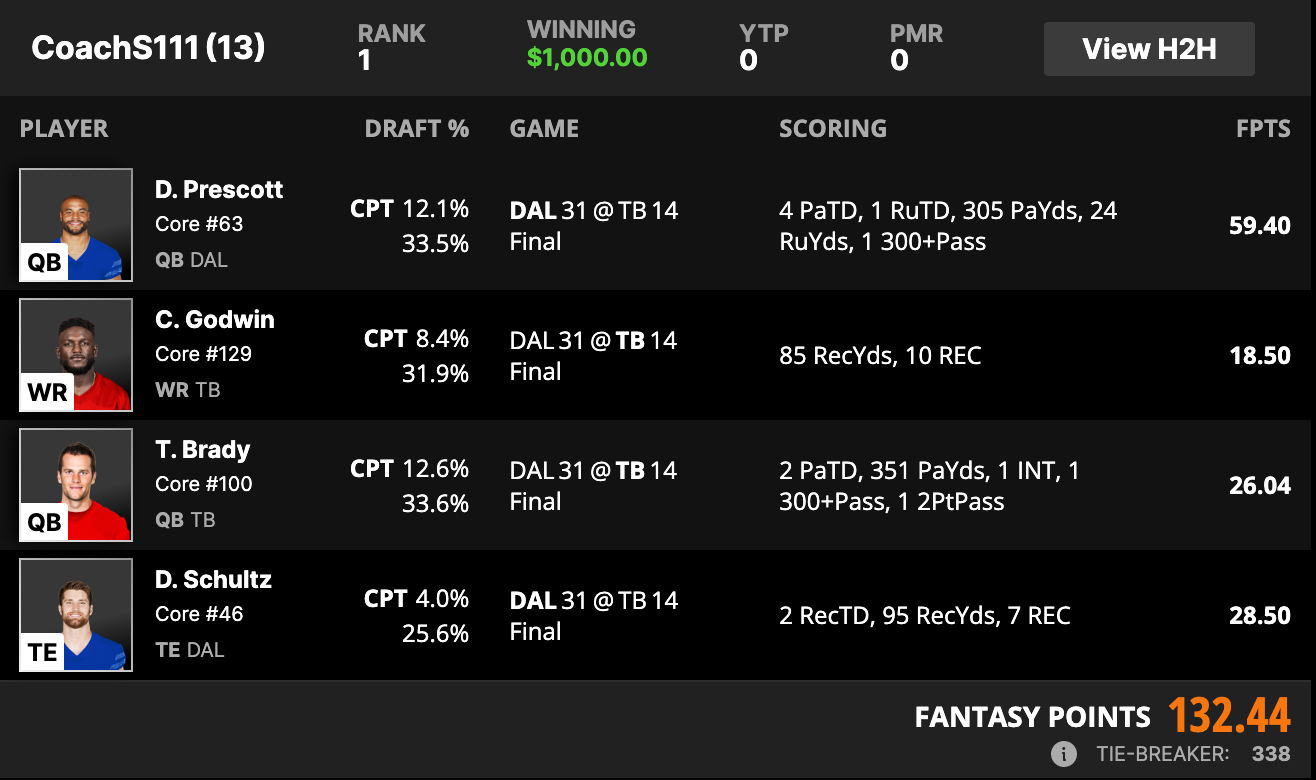 The winner of the CORE Showdown contest was CoachS111 who won an eleven-way tie by having the lowest cumulative serial number. The only thing keeping this team from being perfect was a swap from Chris Godwin to Julio Jones. Jones flashed some youth with a 7-74-1 line despite an overall poor showing by the Buccaneers' offense. CoachS111 took down $1,000 for the win in this contest.