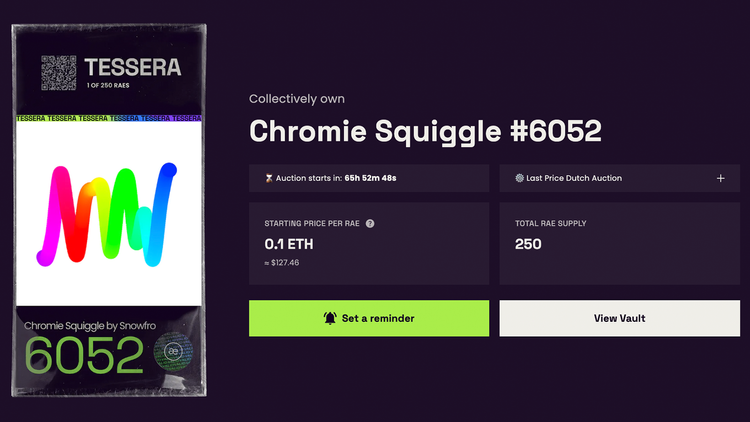 Collective ownership platform Tessera announced the launch of an ApeCoin staking vault on Monday, with both the lack of a geo-filter and the ability to auto-compound yield providing alternative options to other $APE staking methods.

With our vault you can deposit your ape and passively compound

The vault currently only serves the $APE-only pool, with the NFT-gated staking pools will be rolled out at a later date.

The auto-compounder feature allows users to automatically deploy rewards back into the pool, passively compounding earning.

ApeStake.io is the official front-end interface from Horizen Labs, the blockchain technology company tasked with building out ApeCoin staking. The platform is currently geo-blocked in several countries (including the United States) due to regulatory concerns, forcing many users to seek out alternatives.

Tessera also announced their second fractionalized vault coming Thursday, with a Chromie Squiggle from Snowfro up for purchase. 250 'raes', or NFTs that represent a share of ownership over the vaulted NFT, will be created and sold utilitizing a last price dutch auction format.

The previous vault, which featured CryptoPunk #4847, was bought out for 82 ETH by notable market-maker PunksOTC.