Wolf Game took the NFT space by storm in November of 2021, ushering in an on-chain risk format of blockchain games that captivated users at the peak of the Bull Market.

What was a meteoric rise quickly turned into a drastic fall — with contract exploits and an association with a controversial figure in the space leading many in the NFT world to write off the project after the initial boom. But those who stuck around have been treated to a vibrant community, rich storytelling, and genuine fun  — with serious rewards to be had.

And with the launch of Full Game coming in December, Wolf Game may once again be primed to capture the attention of the space. But to understand the future, you must look to the past.

Let's take a walk on the farm to learn everything you need to know about Wolf Game:

What Is Wolf Game?

Wolf Game is an NFT game and ‘risk protocol’ on the Ethereum blockchain. A combination of play-to-earn, DeFi, and risk mechanics foster competition for $WOOL, the native token of the ecosystem.

Who Is Behind Wolf Game?

The Shepherd is the central figure of the game — a mysterious character that acts as the ringleader of the farm. It is unclear whether it is an individual or a full team behind The Shepherd's character, and the team has chosen to remain anonymous as of now. 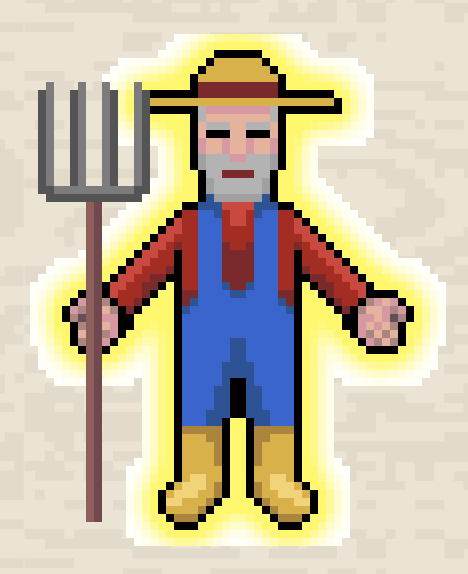 While often linked to the controversial character BeanieMaxi, who was an early hype-man and a minority investor and advisor, he has not been publically involved since the initial launch.

There are several different NFT collections within Wolf Game, all with varying utilities and price points.

Wolves are the most powerful characters in the ecosystem — the name of the project is Wolf Game, after all. In the early gameplay, wolves were able to accrue a ‘tax’ from sheep, as well as steal newly minted NFTs (10% chance).

The hierarchy of wolves is based on the Alpha Score, with A8s (Omegas) being the most scarce and powerful in the ecosystem. 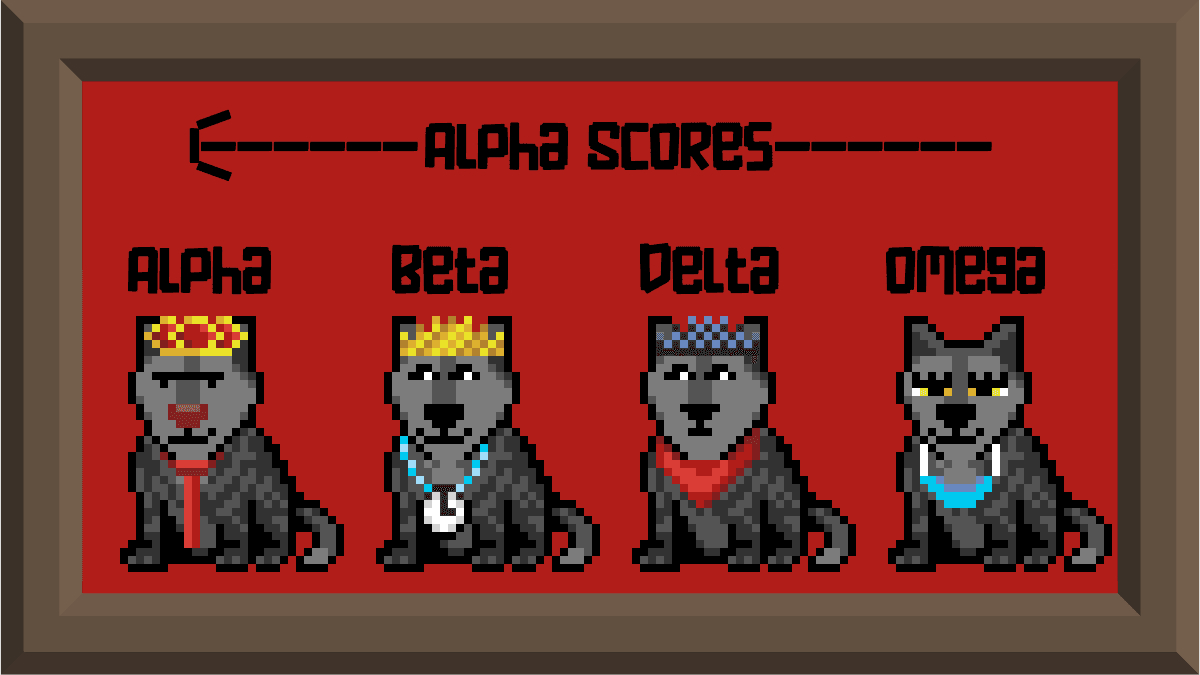 Sheep are the producers of $WOOL — with each initially earning an insane 10,000 per day. The docile animals are at the constant mercy of the wolves, as mentioned above.

$WOOL is the ERC-20 utility and governance token of the Wolf Game ecosystem. Initially earned by sheep, WOOL could also be won through various mini-games and events — and later used to purchase in-game items.

Just days after the project's launch, an issue was found in the staking contract — which led to the pause of liquid $WOOL accumulation. A few days later, The Shepherd released WOOL pouches, tradeable ERC-721 NFTs that drip $WOOL over a four-year period. Pouches help regulate the token supply within the ecosystem and have even been used by the team — with The Shepherd's entire allocation (600M $WOOL) distributed over a four-year period with the rest of the community.

Each of the 20,000 land parcels contains a unique mix of resources (think Settlers of Catan), with users able to “cultivate assets in the quest for economic dominance.” Some lands also contain structures, which will likely be an integral part of breeding when the full game launches.

Land deeds are broken up into communities, which are interconnected with each other across the broader Wolf Game map: 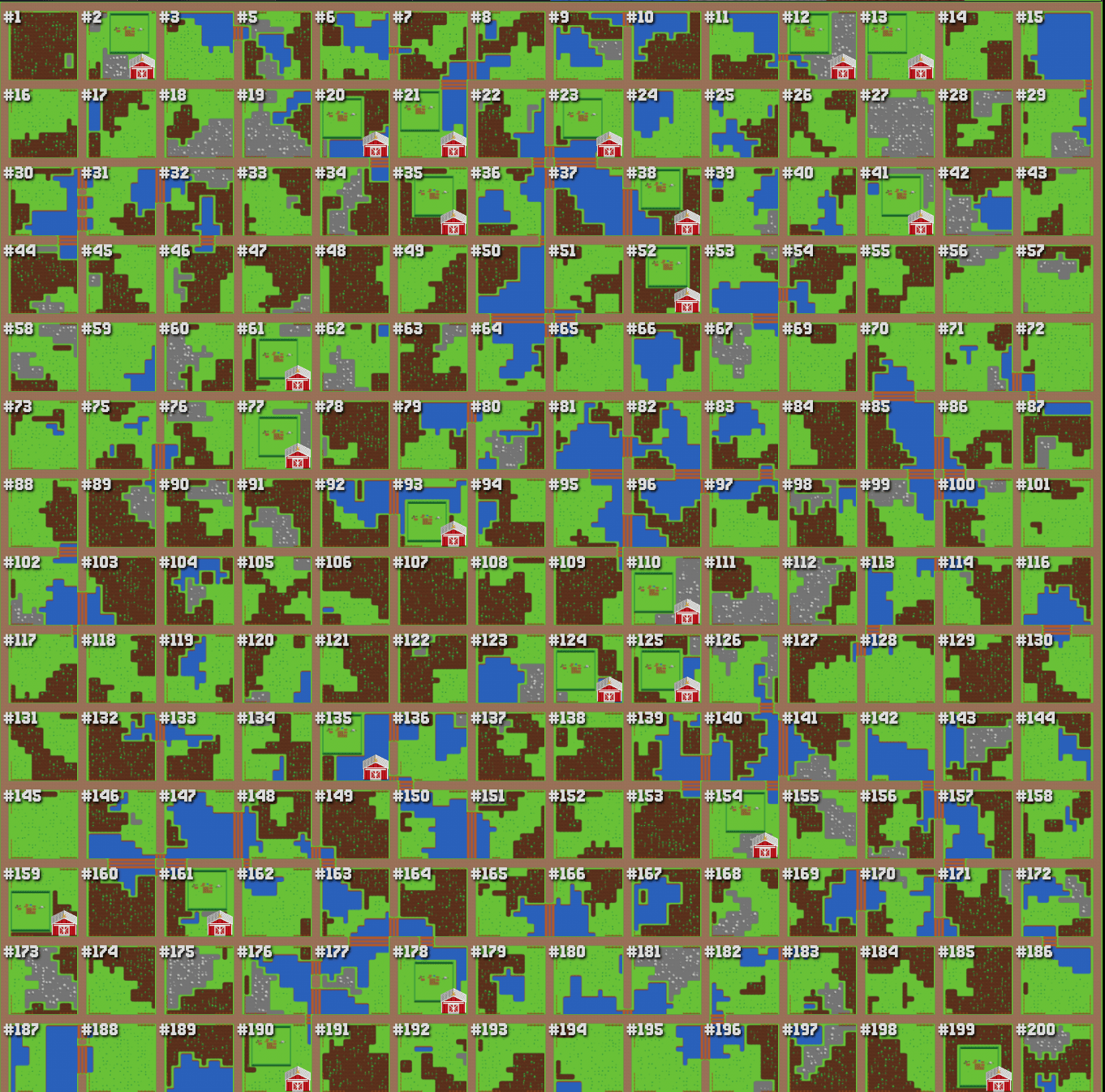 There are also the mysterious 400 Community #0 parcels, which are rumored to live “beyond the verdant valleys of the farm.” While little has been revealed, the C0 lands hold a large premium on the market – trading nearly 20x higher than a typical land plot.

Farmers act as multipliers for land production — and have been teased to hold different capabilities depending on the base character. They may also be a useful form of safety for sheep on the farm, as shown through several of The Shepherd’s GIFs.

While the bulk of the characters in the collection consists of "Average Joes," participants in Cave Game could find Gems — which guaranteed one of the six special characters (Big Daddy, Big Momma, 100 Years, Above Average Jane, The Kid, Diesel). The novel rarity concept culminated in an on-stage reveal:

For the next 72 hours, only you can reveal your Farmer.

Visit https://t.co/4GCHpTUJYL to open the curtain.

After 3 days, I will introduce any Farmers who are still hiding backstage.

The ultimate rewards of the Cave Game mini-game, Gems were NFTs that could be found while wandering the map — and could be burnt to guarantee a rare farmer or sold on the secondary market.

The Shepard is a master GIF creator, and the introduction of Relics was a chance for the community to both own the art and burn $WOOL in the process. Two auctions took place in December and January for 20 GIFs minted as NFTs, with over 10M $WOOL removed from the ecosystem by the winning bids.

Despite only launching a year ago, Wolf Game has had an eventful history.

Wolf Game launched in November 2021 with a 15-tweet thread sending the NFT space into a frenzy:

Wolf Game: Thousands of Sheep and Wolves compete on a farm in the metaverse. A tempting prize of $WOOL awaits, with deadly high stakes.

Sheep could be staked to accumulate 10,000 $WOOL per day. After accumulating, sheep could either be:

Additionally, new animals could be minted using $WOOL — with a 10 percent chance of it being stolen by a staked wolf. This implementation of risk protocol and decision-making was unlike anything the NFT space had seen previously — and all occurring on-chain.

The initial days of the game saw prices of sheep soar to nearly 10 ETH (in the peak of the Bull Market), with animals accumulating eye-popping sums of WOOL and assets through risk mechanisms.

After only three days of madness, the first version of Wolf Game was halted due to several contract exploits. The first enabled savvy users to guarantee wolves when minting new Gen 1 animals with $WOOL — leading to a pause of all minting. The second exploit included a bug in the $WOOL staking/unstaking contract that allowed for large sums to be removed.

With the initial gameplay mechanisms all but broken, The Shepherd regrouped — relaunching three days later and introducing 'The Herdsman', a contract auditor that ensured no further contract exploits were present.

Several changes were made to the initial structure, including the supply of animals (capped at 13,809 G0/G1, as opposed to the original 50,000 planned) and the creation of WOOL Pouches (described above). As a show of good faith, The Shepherd also locked his allocation of 600M $WOOL away in a time-locked pouch — a show of conviction in a market that expected a rug-pull after the contract issues.

After the dust settled, Wolf Game introduced several mini-games — which continued to prompt users to make risk-based choices for the chance at lucrative $WOOL rewards.

Risky Game was the first decision for players post-exploit, with each Sheep able to choose from two risk levels when leaving the barn :

Wolves were guaranteed HUGE pouches depending on Alpha Score, ranging from 500k - 800k WOOL (the current floor on these large pouches is 7.5 ETH).

The prize pool of WOOL earned was dictated by the choices of the player base — a window into the risk mechanisms and community game theory likely to be present in the launch of Full Game. 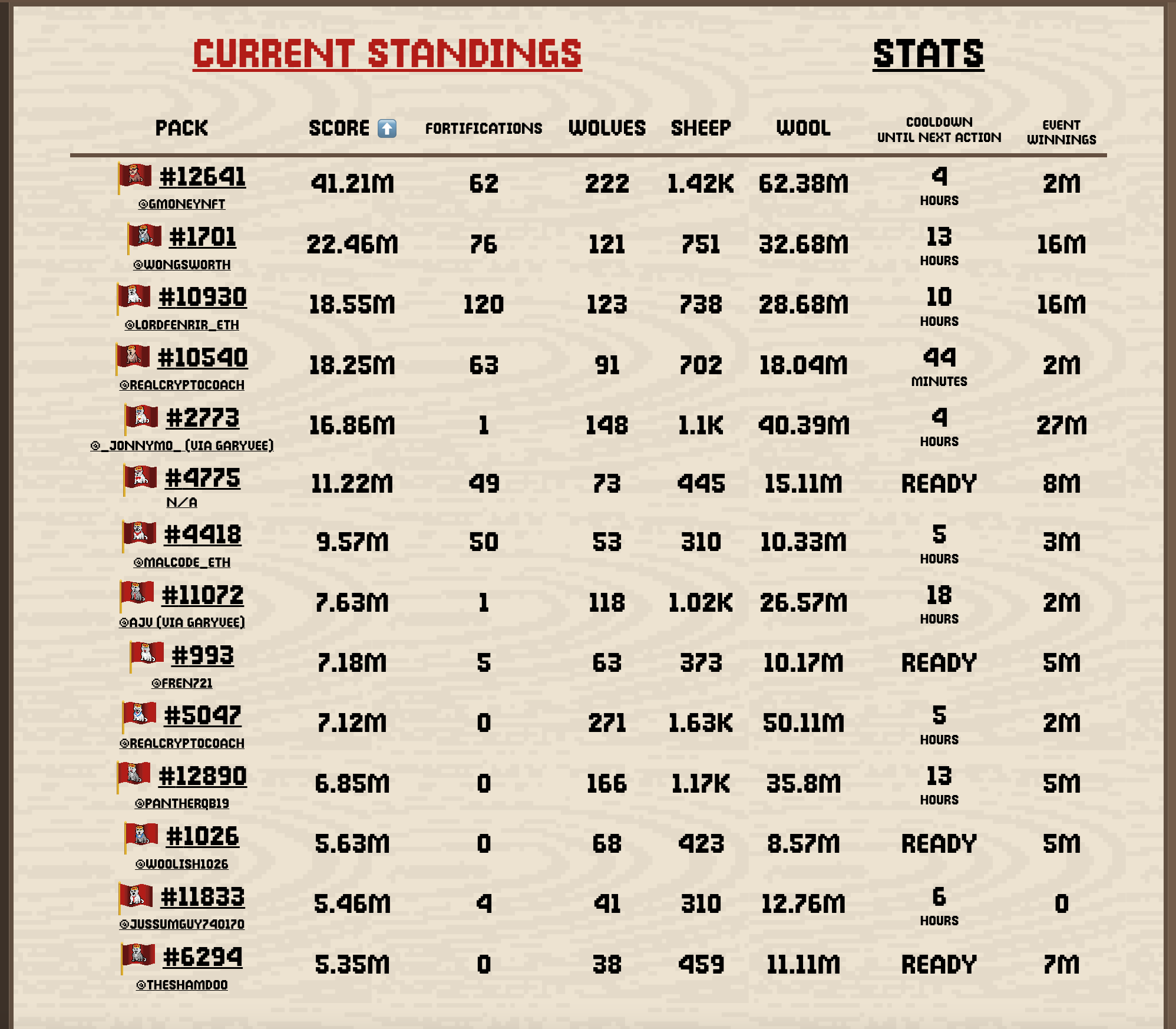 Alpha Game was a lengthier event, which saw The Shepherd divide the community into 'Kingdoms' led by Alpha 8 Wolves in a competition for 500M WOOL in prizes. Players were able to choose their 'champion' by staking their animals with a particular kingdom, with each Pack earning points based on the number of assets pledged.

Additionally, staking WOOL could earn 'Actions' for the Pack, which the leader can choose to either 'Attack' a rival or 'Fortify'. While simple on the surface, the gameplay took on a social element — with alliances, backstabbing, and critical strategy all present in the quest for the top prize.

Alpha Game is still ongoing, but its days are numbered —  with The Shepherd recently announcing that the event will come to a close prior to the release of Full Game. Cave Game was the third and most interactive of the Wolf Game experiences — with Sheep and Wolves able to manually walk through huge mazes (limited energy/steps per day) in search of Gems, WOOL, Woolish Merch, and in-game boosts.  Each cave was unique to the specific Kingdom the animal was staked in — with larger caves to roam for Packs with a greater amount of assets staked.

The in-game boosts could be bought from 'The Shopkeeper' for WOOL, which was burned out of the ecosystem — creating a gamified sink for the native token.

Items such as pickaxes (break through walls), milk (full health revival), and headlamps (illuminate more of the cave) provided substantial advantages in-game, but finding success was possible for all. For those who grew up on a GameBoy — the Cave Game experience brought back memories of walking through the dark caverns in Pokemon.

While few formal details have been announced regarding Full Game, The Shepherd has been slowly dripping out knowledge via intricate, Easter Egg-filled GIFs and messages throughout the year.

In late November, a trailer for the upcoming full launch was revealed, revealing a December release:

The game will utilize a "hybrid Web 3-Web 2 architecture", with gameplay occurring off-chain and ownership of assets entirely on-chain.

The Woolpaper highlights macro-level game theory and micro-games based on psychology and economics, with players competing in risk-based decisions to win WOOL and yield resources.

Most of the game will take place on The Farm, which is made up of Land plots in Communities 1-100. Community 0, now referred to as "The Peak", is a special area where Wolves will breed and recharge. The Peak will also periodically host a "massive multiplayer competition for WOOL", with details released in advance of the first game. Players must have both WOOL and a Sheep or Wolf to participate in the event.

Energy is expended to take actions within the game, with levels varying based on the type of animal and Generation. Animals must recharge using an open Bathhouse — unlike the time-regeneration of energy seen in Cave Game.

Three structures are highlighted in the Woolpaper:

These structures are all upgradable via resources, which reduces the time to breed. A minimum WOOL fee will be charged for the use of each structure, with Landowners also able to set their own fee parameters.

Breeding is a significant component of Wolf Game, with Farmers providing both protection and 'advancement' for Sheep during the process. Wolves may try to steal during the initial Breeding phase (Courting), in which they receive either Chops or the offspring. The outcome of stealing depends on several variables, including the Alpha Score of the Wolf.

Farmers also play a role in the collection of resources, providing boosts on yield and protection from Wolves.

Weather is another new factor introduced, which impacts the collection of resources. Three different types (Sunny, Cloudy, Rainy) are independently present across communities, with the weather updating each day at midnight based on a 60-day weather forecast.

The Woolpaper also details several 'Looting Games', which are risk-based decisions that are played during resource gathering and other gameplay situations.

Delegation will also be available to players, allowing others to play assets without transferring ownership. Sheep or Wolves can add a new wallet as a Delegate, allowing flexibility for large accounts or less active players.

All WOOL spent in-game is either burned out of the ecosystem or added to Community Rewards, which are distributed during competitions on The Peak.

The release of the full Wolf Game is expected this week. Additional details on game mechanics can be found in the Woolpaper.