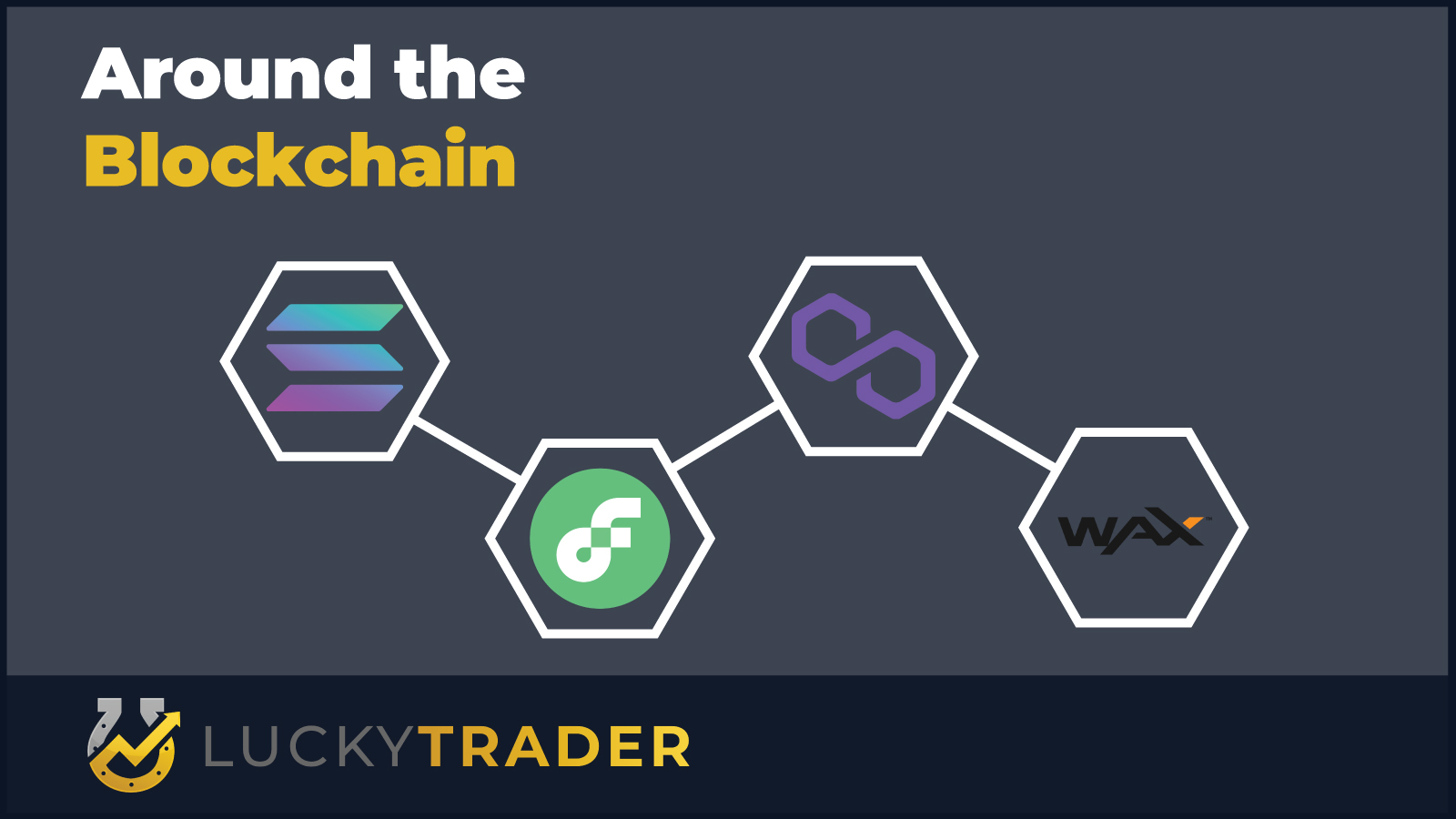 There is a lot to cover in our second edition of Around the Blockchain, so a quick reminder of what this piece is all about. Around the Blockchain specifically covers non-Ethereum blockchains. The main two ecosystems that will be covered will be Solana and WAX, but others, such as Flow, will be included as well. This weekly recap will not share everything happening on these chains, but the top news from each!

DeFi Land will kickoff its public beta next week on December 22. Users holding at least 10,000 $DFL, the game’s native token, can play now and try out their new fishing game.

There has been a never-ending list of derivatives and copycat projects in the NFT space, and the Solana blockchain is no different. In this case, Dreamland Monkeys has a distinct look that is eerily similar to that of the successful ETH project, Doodles. Dreamland Monkeys launched their public sale last Friday, allowing mints for 0.9 SOL. Although the project sold out of its 2,900 NFTs available for public mint quickly, the floor has since dropped to below the mint price. As of writing, the project's floor sits at 0.6 SOL on Magic Eden.

As NFTs go mainstream, more and more celebrities get into the space with projects of their own. Enter, former First Lady, Melania Trump. Trump announced this week her release of “Melania’s Vision”. The NFT is available now to be minted on her website for the price of 1 SOL. At present time, no mint limit is listed, but the mint process will close at 11:59 PM PST on December 31, 2021. As of right now only 848 mints have been created thus far.

Finally, the biggest news from the Solana blockchain comes in the way of a new P2E game. Prior to Thursday’s much anticipated public mint, ChainMyth   sold Golden Passes, which gave users a free game character. Throughout the week, the floor price on passes crept all the way past 9 SOL for guaranteed access to an NFT being sold in the public mint for 1.2 SOL. Golden Passes proved fruitful though, as the public sale lasted just ten seconds. The golden passes, with their now-unknown utility, still have a floor of 6.8 SOL on Magic Eden, as compared to the “MonkeyKing” character NFTs themselves and their 3.2 SOL floor at the time of writing. The ChainMyth game is a first person shooter game, with an off-chain beta expected to launch prior to the end of 2021. The full on-chain game, however, will not be ready until at least March of 2022.

More interestingly the famous company Atari launched a new NFT on the WAX blockchain this week. Atari had previously sold packs of NFTs back in November, but this week marked the beginning of special auctions for two 1-of-1 pieces designed to commemorate the historical Atari game Pong. Ending on Wednesday, December 22, Atari Red Edition and Black editions currently sit at a high bids of 312.40 and 283.14 WAX, respectively. Participants can follow the auction and bid here.

On Wednesday, the strategic military digital card game Warsaken launched their initial pack drop. The game has not yet been released but the lore, tokenomics, and whitepaper are all available at the Warsaken website. There are three pack types currently available for sale, booster (18 cards), elite (18 cards but higher rarities), and premium packs (7 cards at extremely high rarities) for 11, 55, and 177 WAX, respectively. There are plenty of packs still available and for a limited time, players can purchase a “First Wave Upgrade” at a 50% discount (usually 14 WAX, currently 7), which can be used to upgrade any card to an increased rarity level.

Another strategy game, Xpansion, just announced an upcoming giveaway of 1,000,000 $XPS (the Xpansion token) to WAX users. The game, already live on the WAX blockchain, consists mainly of land NFTs, used to mine in-game resources and tokens, and equipment NFTs that boost land’s productivity. Up to 20,000 winners will be eligible to receive an airdrop of 50 XPS, currently worth a little less than 6 $WAXP on alcor.exchange. Interested participants can read more about how to enter the giveaway here or head on over to the Xpansion website to find out more about how to play.

As was the case last week, Dapper’s flagship project NBA Top Shot dropped another round of base set common packs. The company successfully sold out all 225,000 of their Series 3, Release 5 packs for $9 each. Meanwhile, the newest project NFL All Day let in another round of beta users. Dapper’s Seussibles, a Dr. Seuss based NFT project featuring NFT stickers from the famous books, exited from their test app and launched the official Seussibles app this week as well.

Flovatar, the first PFP project to allow users to actually design and create their own avatar NFT, launched on the Flow blockchain on December 16. To start, 6,000 standard packs were offered up for sale at a price of 9 FLOW each, and an additional 2,999 deluxe packs for 35 FLOW. Like most PFP projects, there are rarity tiers and different odds depending on which pack is purchased. Flovatar is also offering the sale of Flobits, accessories (such as hats and eyeglasses) that can be purchased and added (or removed) from the Flovatar as part of the PFP customization process. Interested individuals can refer to the Flovatar Medium to find out more about the process.

Last week DraftKings dropped a new Tom Brady NFT. This week they moved to skateboarding legend, Tony Hawk. Like the Brady NFTs, the Hawk NFTs dropped in partnership with Autograph, where eligible collectors had early access prior to the public sale on December 16. The mystery containers sold out but can be purchased on the secondary market at DraftKings Marketplace.

On December 14 the Calgary Flames dropped their NFT project, available to be purchased for fiat (either $USD or $CAD) on their own white labeled marketplace. Each Calgary Flames NFT holds some form of unlockable content. The newest NHL team, the Seattle Kraken, will be launching their own NFTs in partnership with Orange Comet on the Avalanche blockchain, the same blockchain as the Islanders used. The NFTs will celebrate the Kraken inaugural season.