The divisional round concluded last night with a two-game Reignmakers slate. The key to winning on Saturday was having multiple Eagles and Travis Kelce, who scored ten points more than anyone else on the entire weekend. On Sunday it was necessary to have a Bengals stack with CeeDee Lamb.

Amongst the four SuperStars left, only Josh Allen was eliminated over the weekend, leaving Jalen Hurts, Patrick Mahomes and Christian McCaffrey to pick from next week.

With the remaining teams now cut in half, it will be interesting to see if the majority of Reignmakers players choose to sell before the end of the season. Players should keep in mind DraftKings announced that 2022 cards can be exchanged for 2023 cards using a “craft and burn” functionality. 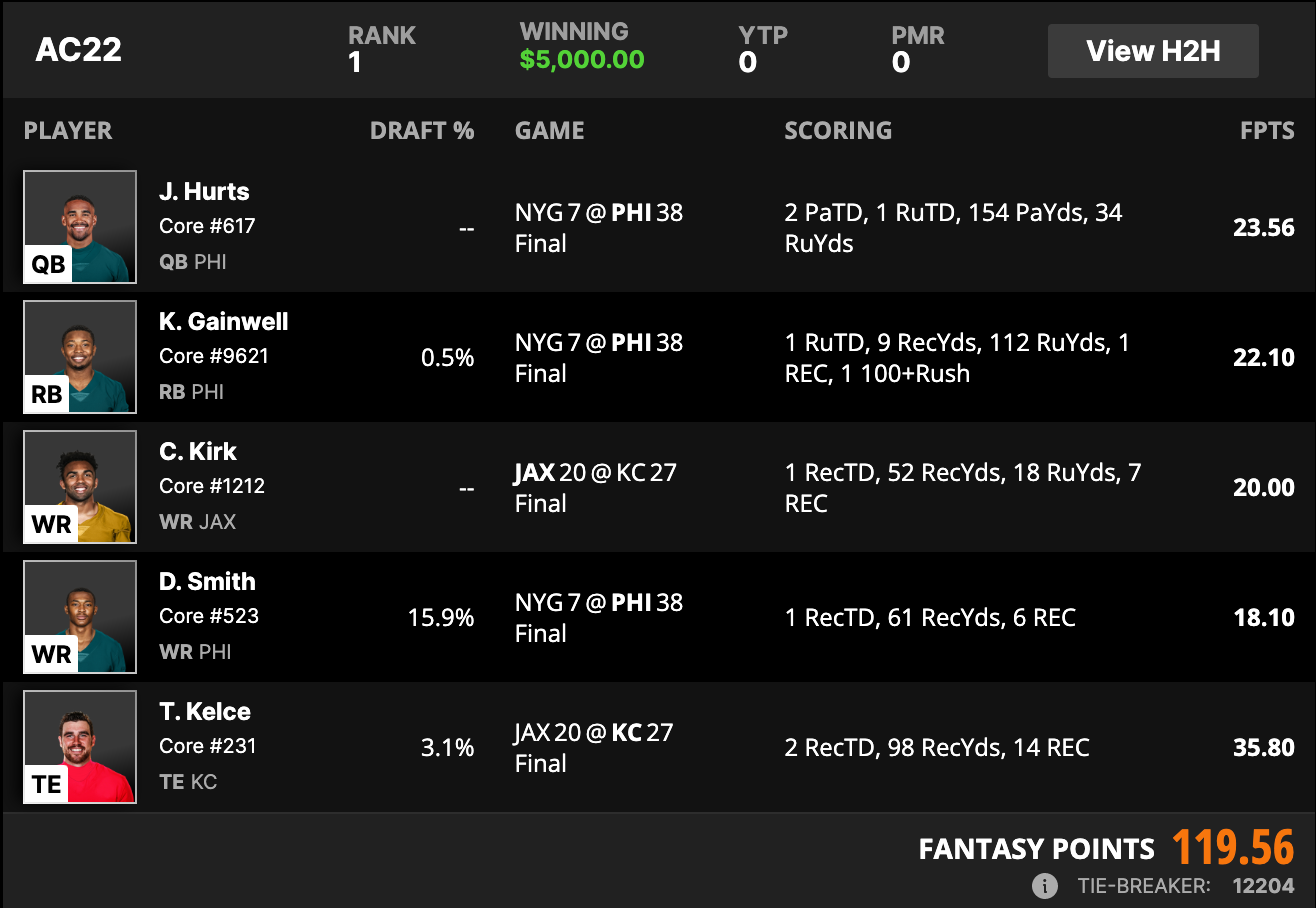 The winner of the CORE contest on Saturday was AC22, the only player to have the perfect lineup construction. This was an unlikely team to build due thanks to Kenneth Gainwell, who received extra carries in the fourth quarter with the Eagles up big. Miles Sanders is still the preferred card to own going into Philly’s matchup with the 49ers next weekend. 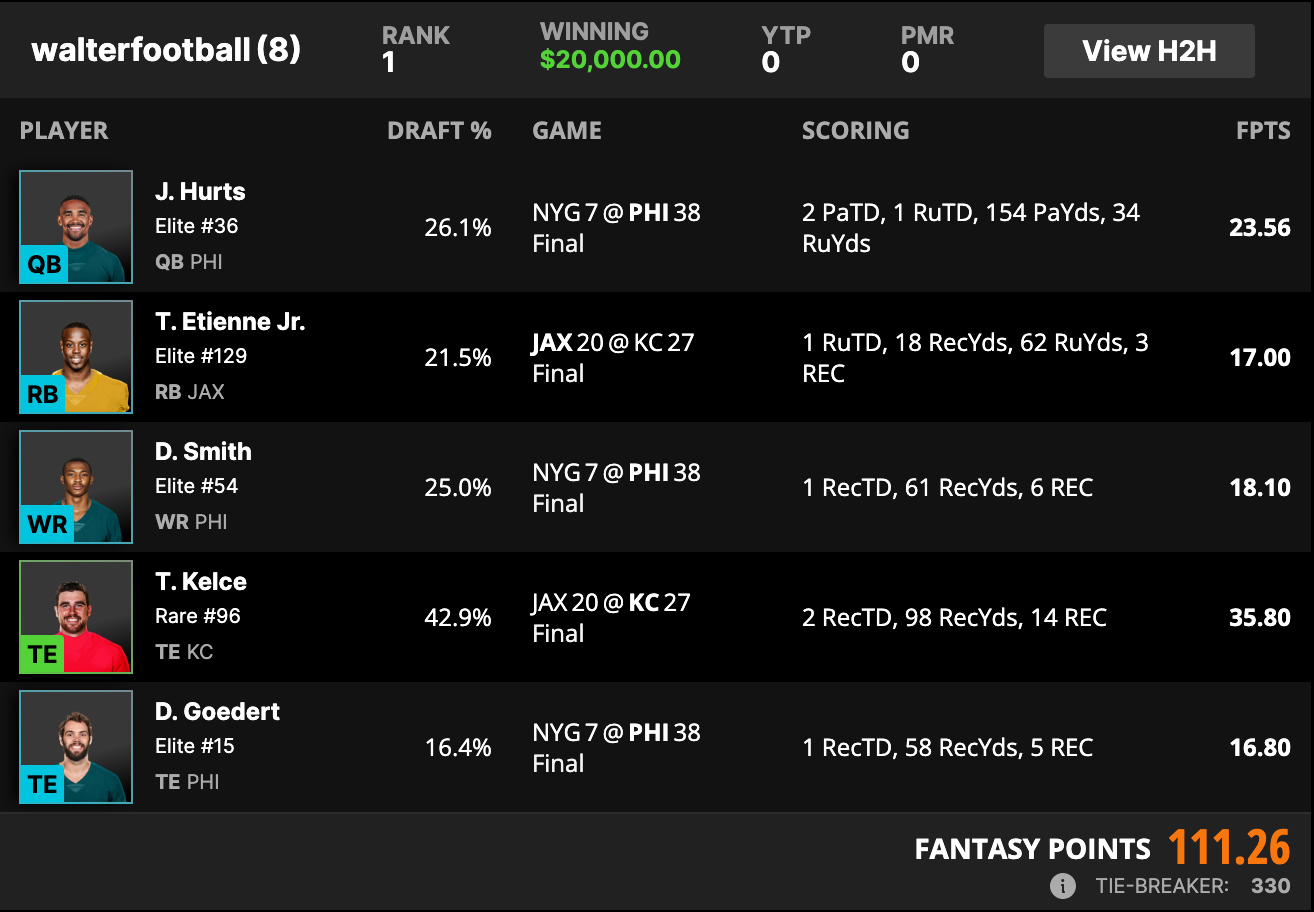 The winner of $20,000 in the ELITE contest on Saturday was walterfootball who double-stacked Jalen Hurts with DeVonta Smith and Dallas Goedert. Most players at the top of this contest had Travis Etienne who scored significantly more than Jerick McKinnon despite the latter being the highest “Riser” in the marketplace last week. Etienne is the only member of this team who cannot be used next week. 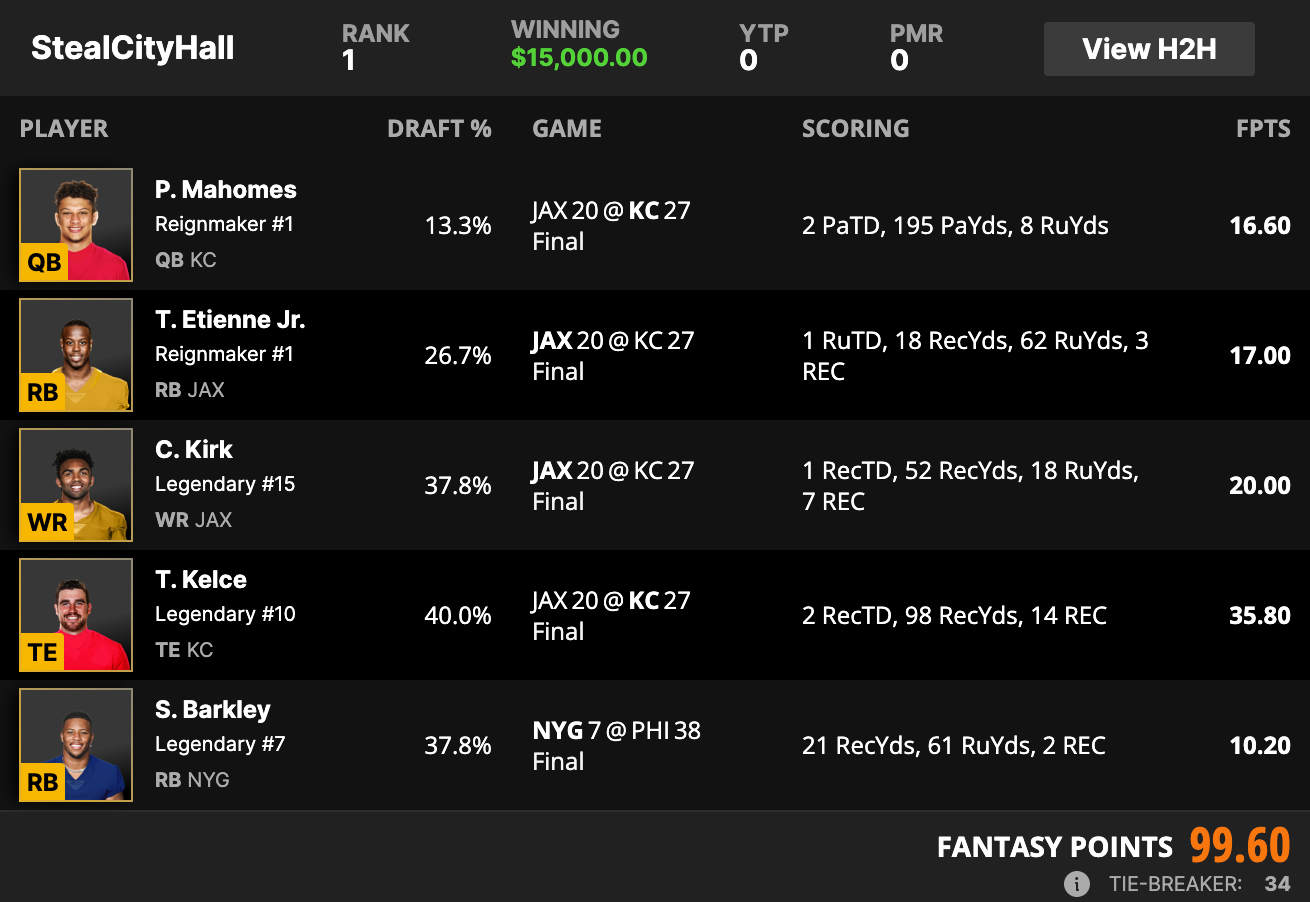 StealCityHall won Saturday’s “The Alpha” tournament with four players from the Chiefs/Jaguars game paired with Saquon Barkley. In this field of 45 players, this user didn’t need any fantasy points from Eagles players to secure the win. Unfortunately, more than half the players on this team are done for the season. 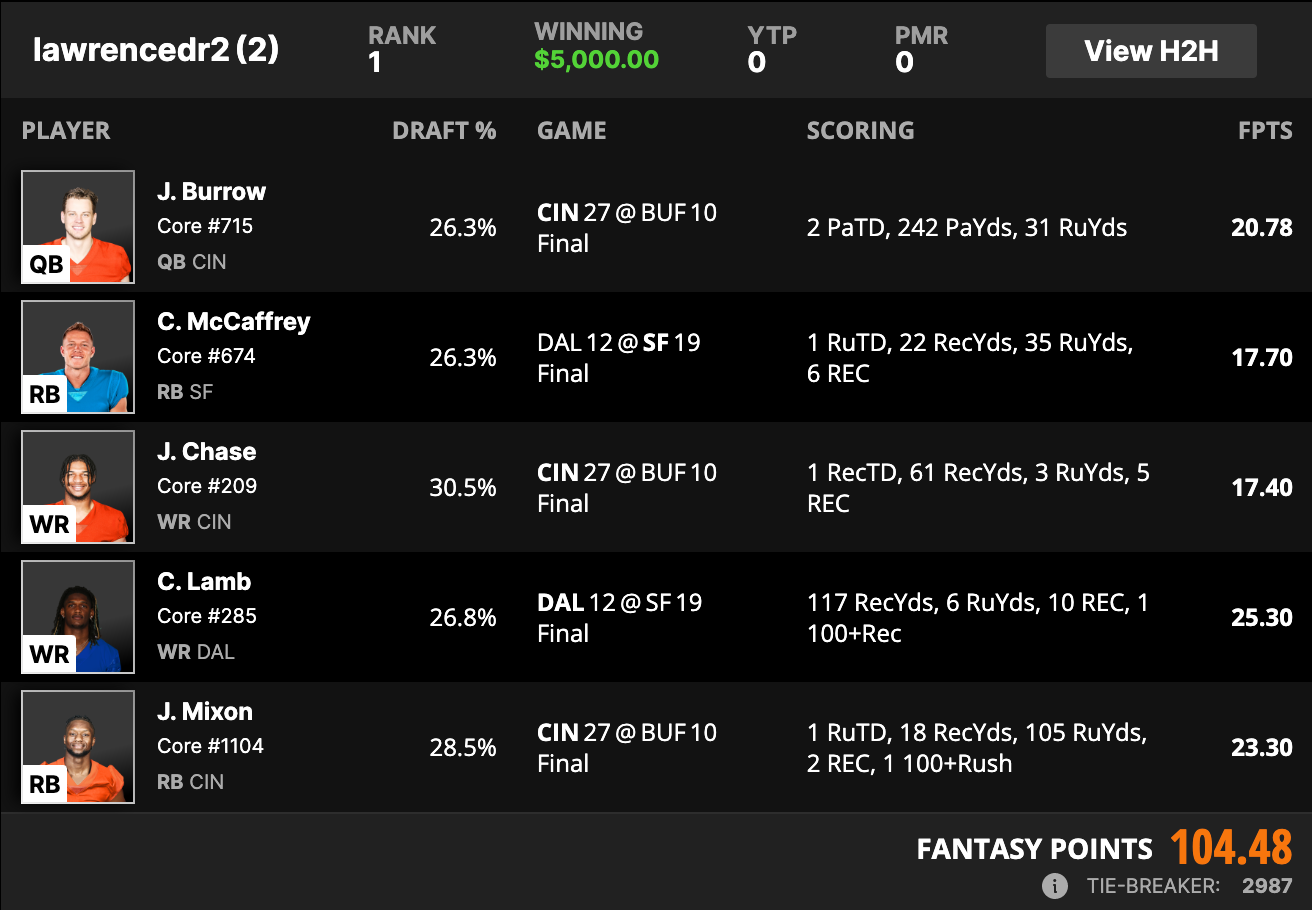 The winner of the CORE Fiat Frenzy on Sunday was lawrencedr2 who won a seven-way tie among teams with the perfect lineup construction. This team had McCaffrey as its SuperStar to go along with a three-man Bengals’ stack without a Buffalo player as a bring-back. Buffalo couldn’t keep this snow-filled game close against Burrow and company. 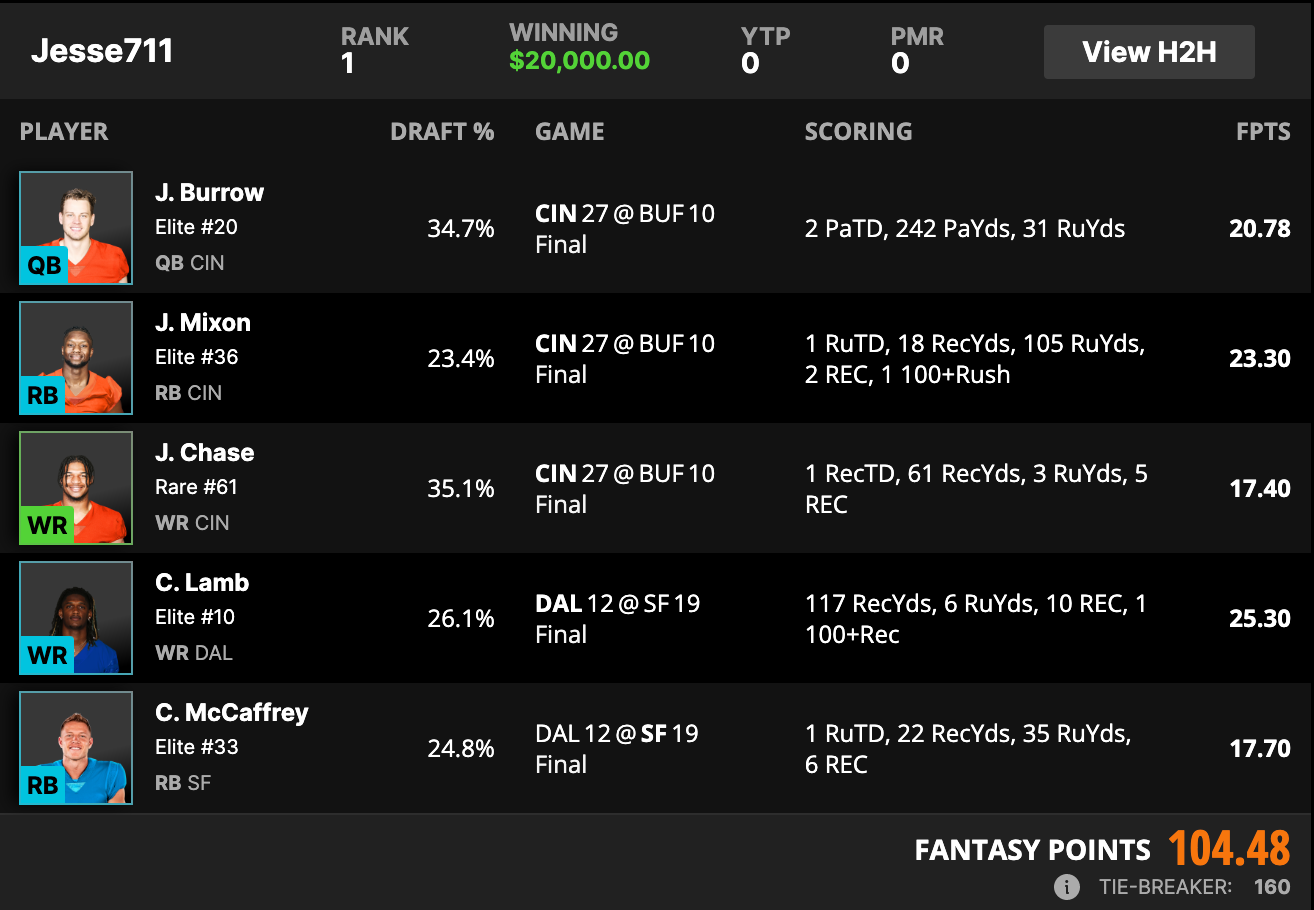 Jesse711 won the ELITE contest on Sunday with the same team as the CORE winner, this time without a tie-breaker. In this field of 666 players, Jesse711 was the only one to score more than 100 DKFP. Only CeeDee Lamb will be ineligible for use next weekend. 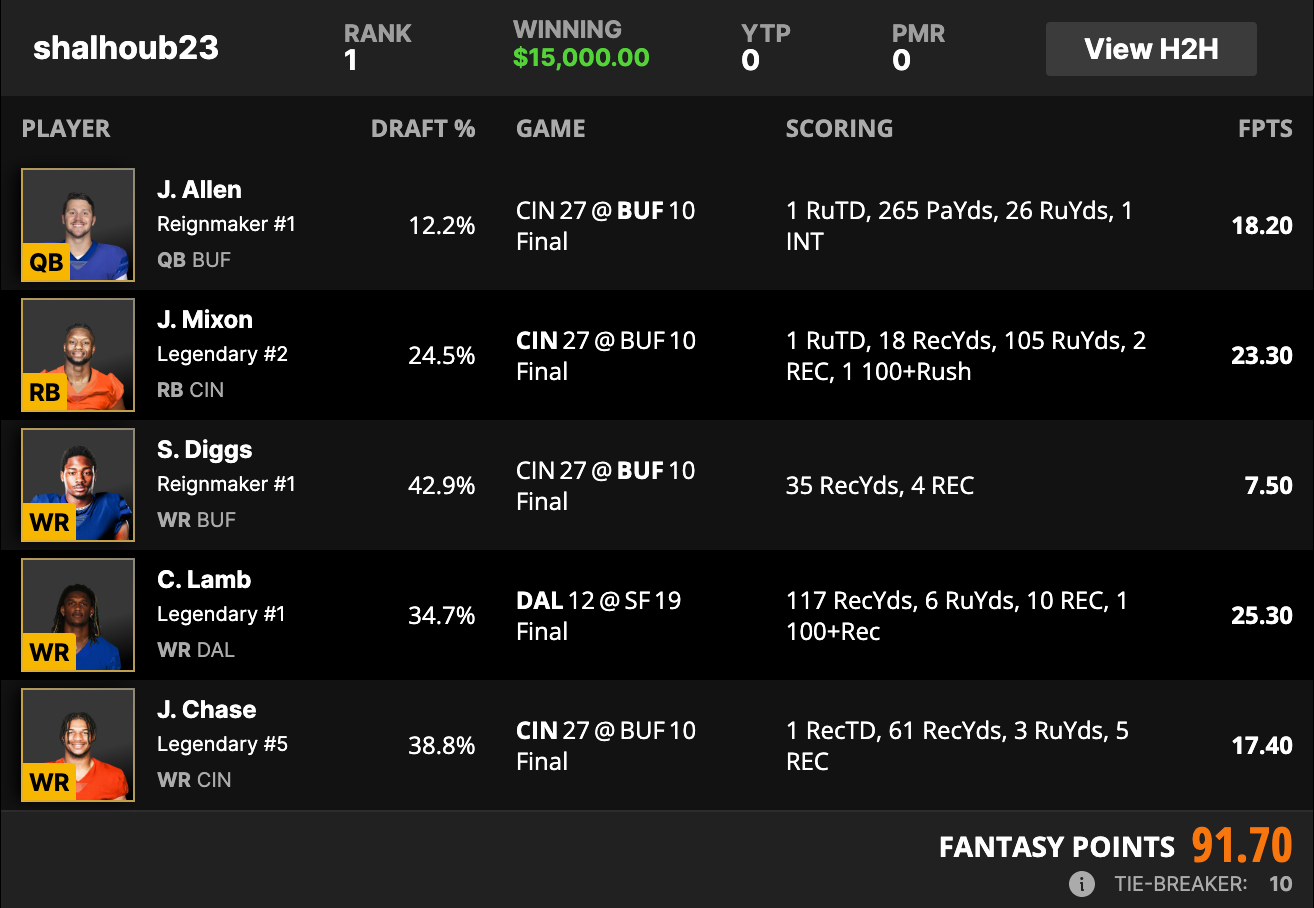 And finally, shalhoub23 won “The Alpha," breaking a three-way tie at the top. This team won despite Josh Allen and Stefon Diggs underwhelming on Sunday. Both Joe Mixon and Ja’Marr Chase will be pivotal plays next week as Cincinnati travels to Arrowhead.