In Week 16 of the NFL season, Reignmakers players were gifted with an 11-game Saturday slate and a 3-game Sunday slate on Christmas. The Christmas slate featured the $400K Holiday Set Sweater Special, which required five sweater-themed cards from the Reignmakers Holiday Set.

With freezing temperatures and heavy wind throughout most of the country this weekend, there were two notable indoor matchups that contained most of the fantasy scoring - Giants/Vikings and Eagles/Cowboys. These games provided most of the scoring and each winning Reignmakers team contained at least two players from these games.

In fact, six out of the top ten scoring players on Saturday came from one of these two games. Dak Prescott was on all five of the winners, while CeeDee Lamb was on four out of five.

On Christmas, the weather wasn’t as much of an issue with the games hosted in Florida, California, and Arizona. The rare teams that rostered Cam Akers found success, as the Rams’ running back scored 37.7 DKFP, the highest on the weekend by more than 10 points.

As the regular season comes to an end, things could get interesting with DraftKings announcing curated collection-oriented challenges for 2022 player cards and a "craft and burn" functionality that will allow collectors to exchange 2022 cards for 2023 cards. It will be interesting to see how the market responds to people’s willingness to buy or sell before the end of the season.

Here is a look at the winning teams in Week 16: 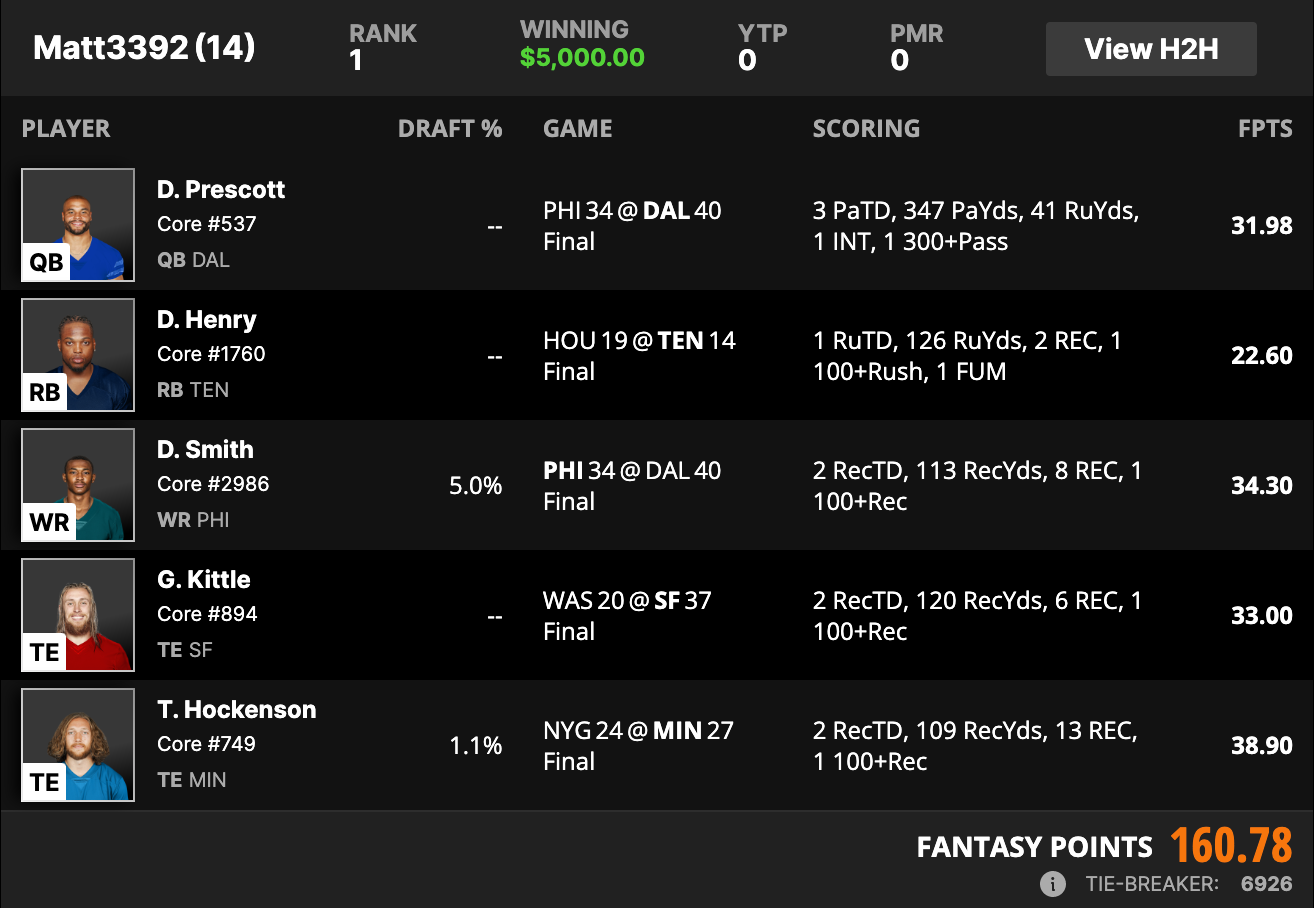 Matt3392 won the CORE Fiat Frenzy this week with a near-perfect lineup construction, needing only to flip Saquon Barkley for Derrick Henry and CeeDee Lamb for George Kittle to accomplish it. This was the only team that didn’t roster Lamb, who dropped a 10-120-2 receiving line against the stout Philadelphia secondary. 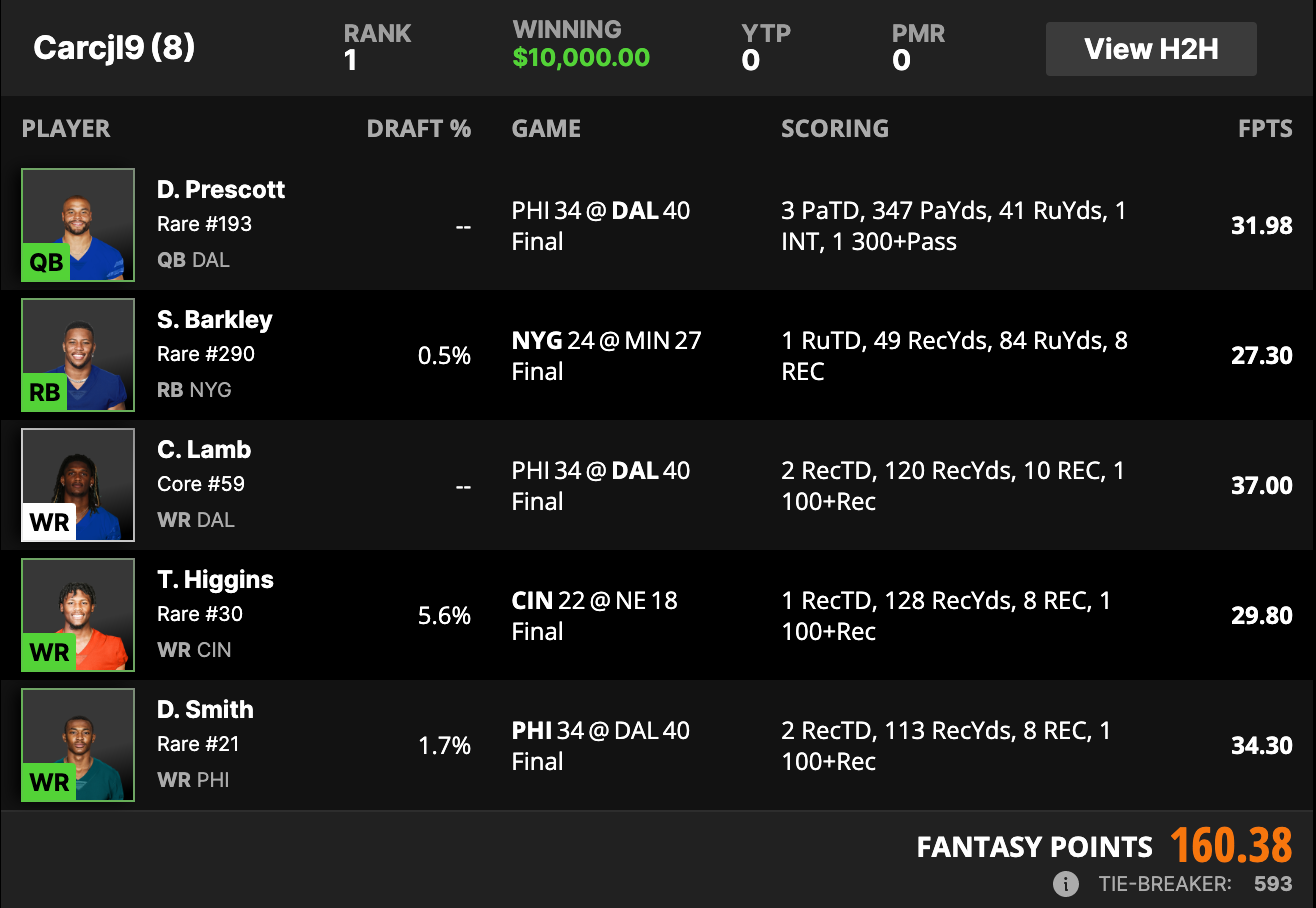 The winner of the RARE contest was Carcjl9 who had four players from the aforementioned dome games. The one exception was Tee Higgins, who benefitted from a Patriots’ scheme that directed extra attention to Ja’Marr Chase. Chase caught eight of his twelve targets for just 79 yards. Carcjl9 took home $10,000 for first place in this contest. 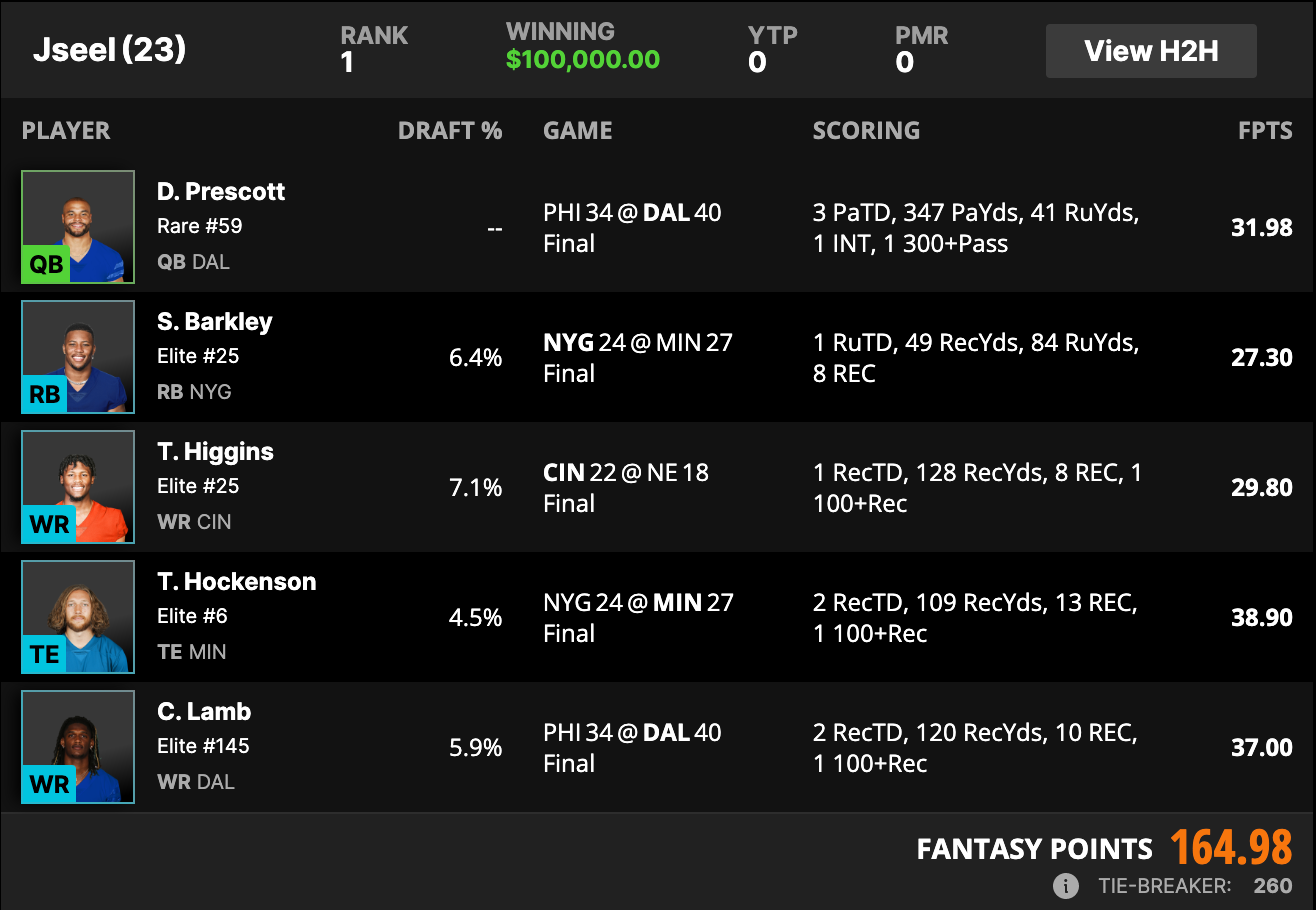 Jseel won the ELITE contest on Saturday with the highest total score amongst all the winners, 164.98 DKFP. Yet another Prescott-Lamb stack, this team was bolstered with T.J. Hockenson’s 38.9 DKFP performance, the highest on the entire slate. The Giants kept this game close allowing Hockenson and Jefferson to amass 16 targets a piece in a game where Minnesota was forced to throw. 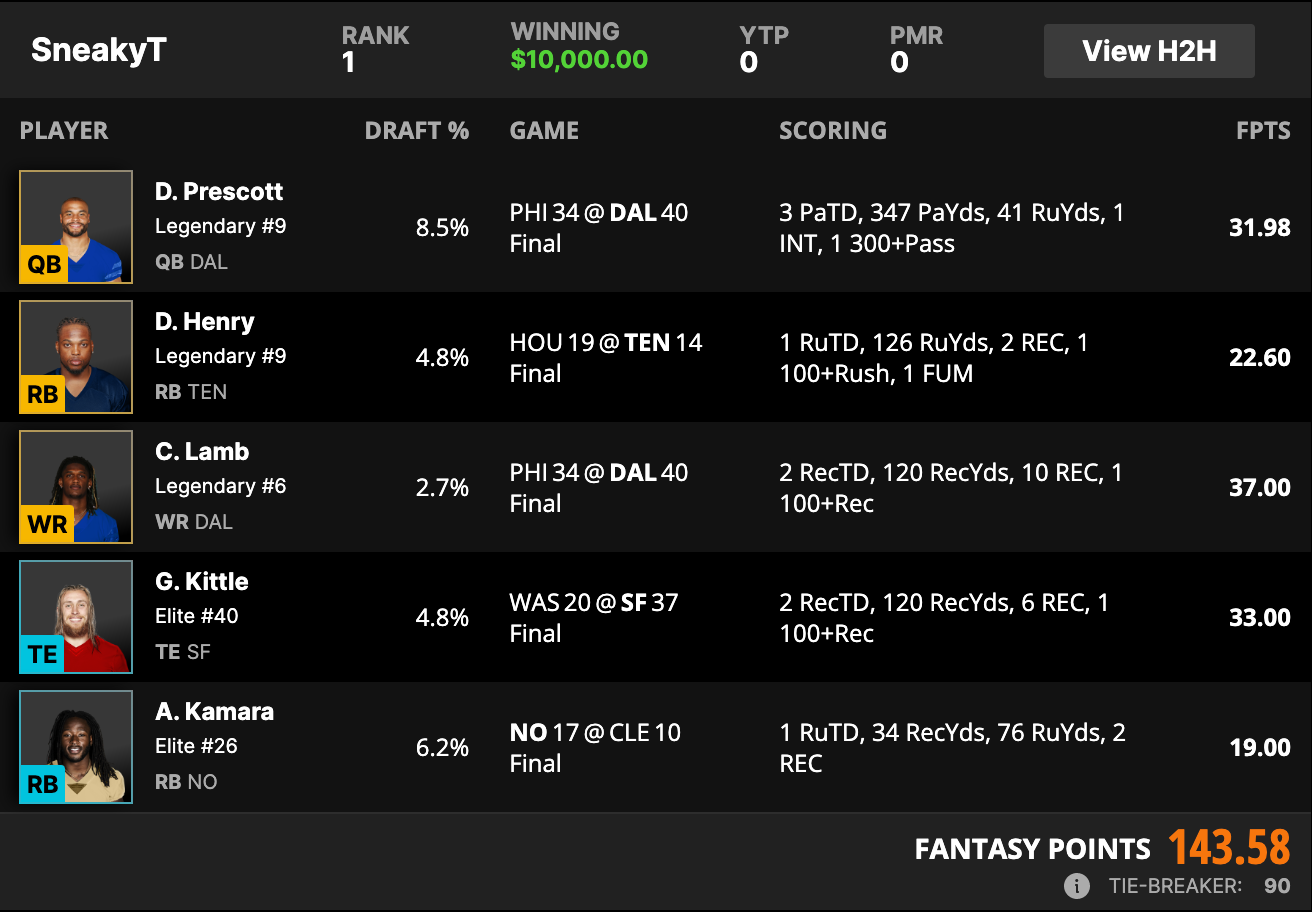 The winner of the LEGENDARY Fiat Frenzy was SneakyT. This team played Derrick Henry as its SuperStar, who was the most popular among those with the designation. Henry was in an obvious smash spot at home against Houston and performed as expected despite the loss. 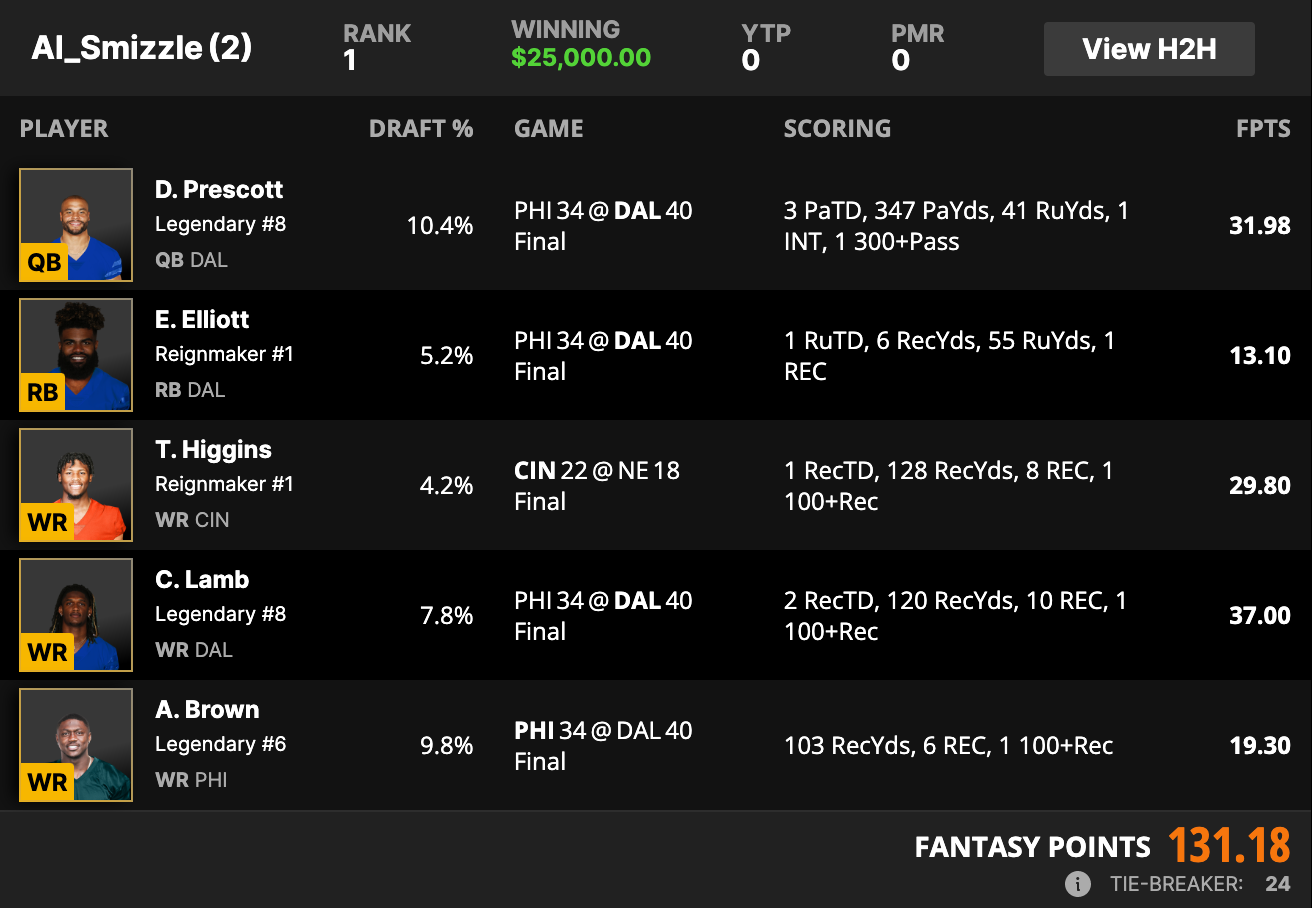 Al_Smizzle won “The Alpha” this week with four players from the Eagles/Cowboys game. On a slate with multiple games negatively affected by weather, loading up on players from just one game proved to be a success in this field of just 193 players. This team actually tied with the second place team despite having two different players. Per the tie-breaker rules, Al_Smizzle won with the lowest cumulative serial number. 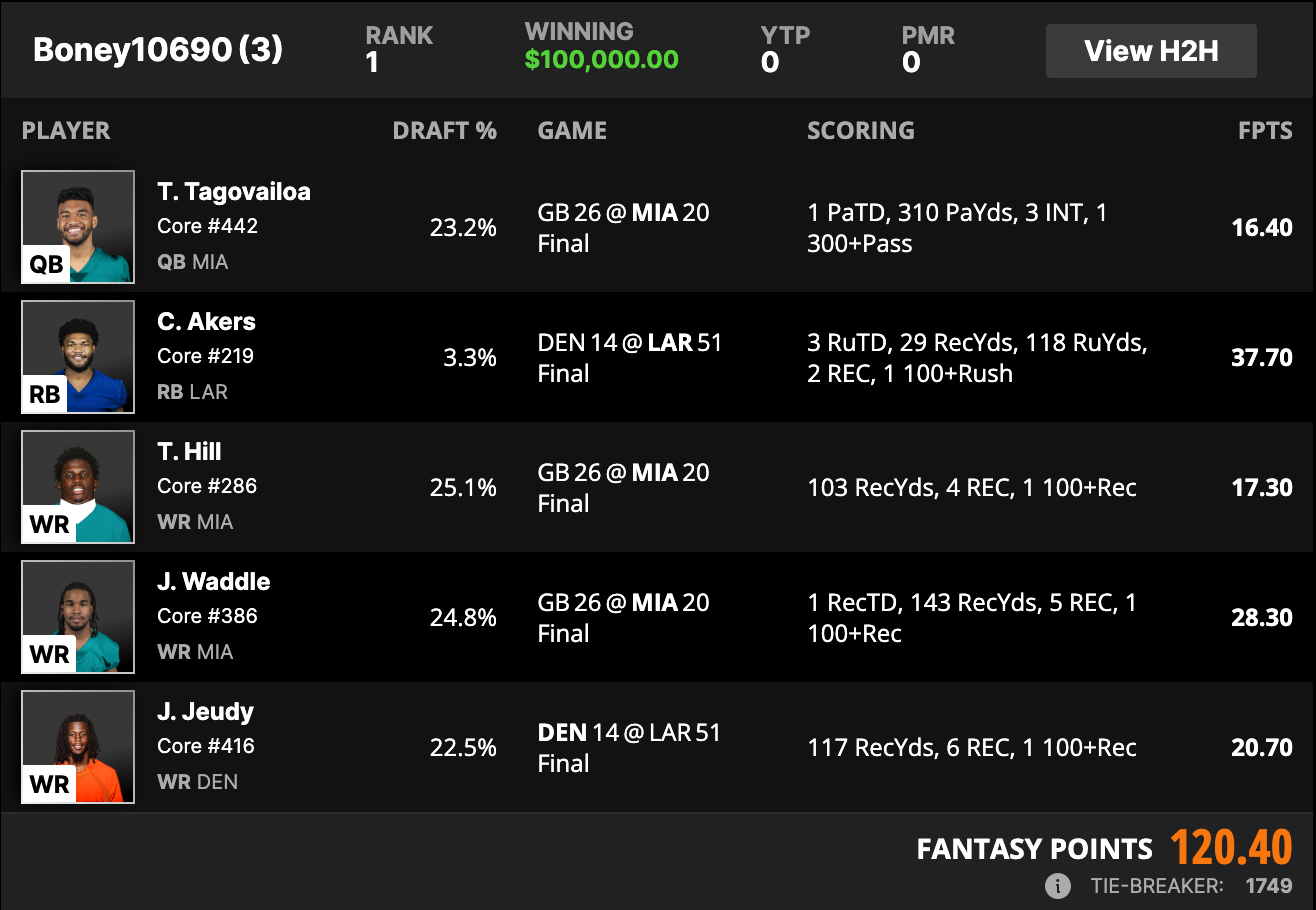 The winner of the $400K Holiday Set Sweater Special was Boney10690 who leaped the competition thanks to a 3.3 percent Cam Akers. Akers decimated the Broncos on the ground for three touchdowns en route to an overall RB1 performance in Week 16. By rostering five sweater-themed players from the Holiday Set, Boney10690 took home the largest prize on Christmas Day.