How to Get Started With Crypto Raiders Play-to-Earn Game 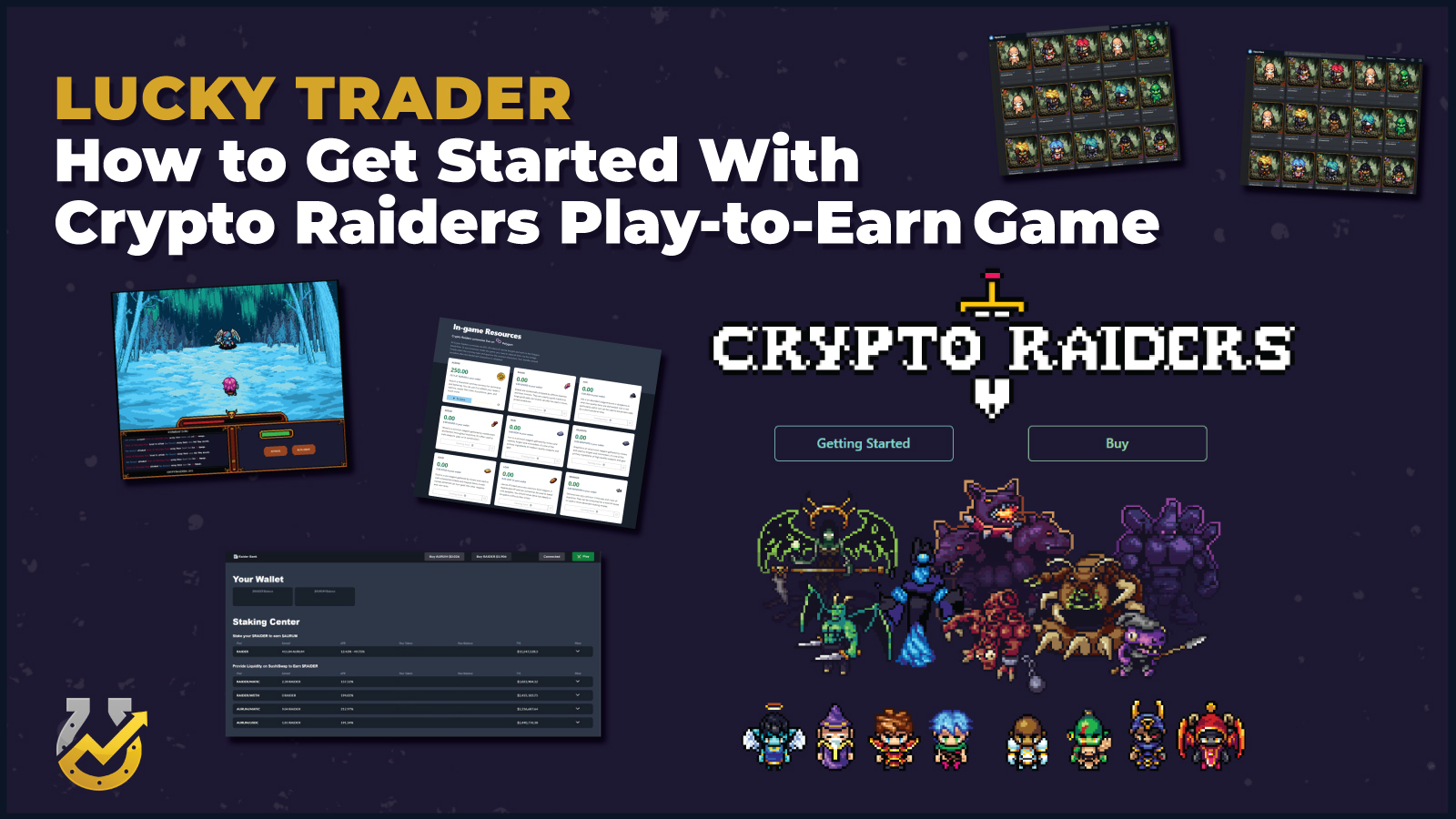 What Is Crypto Raiders?

Crypto Raiders is a dungeon crawler game that blends the worlds of DeFi, NFTs and play-to-earn all at once. With a low-cost entry point, easily accessible currency methods, and tiered gameplay, Crypto Raiders offers the perfect starting point for those new to NFTs and enthusiasts alike. This guide will showcase how to get started with Crypto Raiders, how to buy raiders, interact with the Polygon network, and raid dungeons to earn.

How Do I Get Started With Crypto Raiders?

The first step to playing Crypto Raiders is to acquire a Raider. Available on OpenSea, the collection must be purchased with ETH that has been bridged to the Polygon network. OpenSea has a built-in function that allows users to wrap ETH and bridge to the Polygon blockchain, ensuring interested users can buy a Raider in just a few clicks. At present time, acquiring a Raider is relatively inexpensive as the floor is 0.05 ETH for a Raider at the time of writing. Additionally, Raider recruitment events will continue to increase character supply over time, creating a low-cost entry point for anyone to get involved. 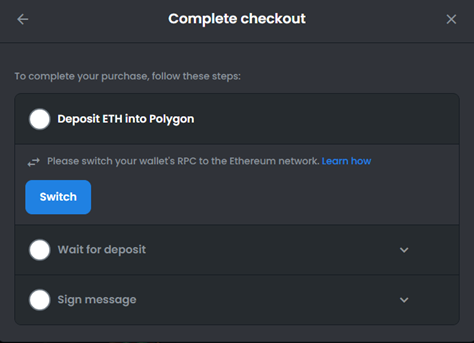 Each Raider comes with varying attributes and characteristics that affect its ability and ultimately price. Fortunately, these characteristics are easily analyzed and understood. Each Raider has a race (human, fairy, orc) and a generation, which do not affect the Raider's ability in game. Each Raider also has a level, which is the number displayed to the left of each Raider's name when viewed on OpenSea. Each Raider holds a level of one through seven, with seven being the highest possible level. Each level gains Raiders seven stat points for in-game use.

Finally, each Raider has gear. Currently, an inventory of a Raider's gear can be found in the description section of the Raider on OpenSea. Having trouble understanding which gear is best? Users can head over to the Crypto Raiders Discord where the community will gladly help provide guidance on what gear is most useful. Gear is important for fighting in dungeons, so finding a Raider with a useful inventory is a worthwhile endeavor. However, buying a fresh recruit and earning gear through raids is generally viewed as a more fun experience. 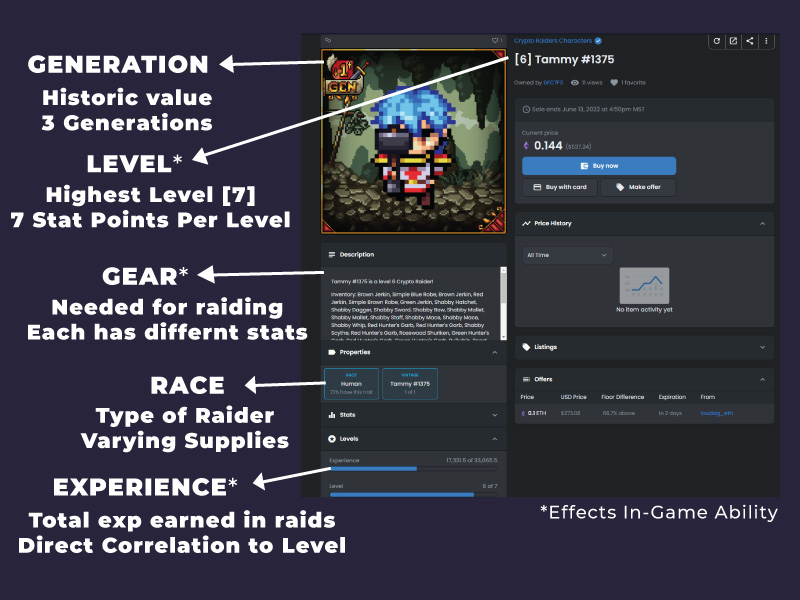 How Do I Get Started With Polygon and The Crypto Raiders Dungeons?

After adding a Raider to the collection, a user must ensure they add the Polygon Mainnet to their Metamask for interoperability with the game. To add the Polygon Network to Metamask, users can follow this guide from the developers at Polygon. Once the Polygon Network is added and enabled, users can connect their wallet to the Crypto Raiders site to get started. After signing in, users will be able to see their characters and being to raid dungeons for gear! 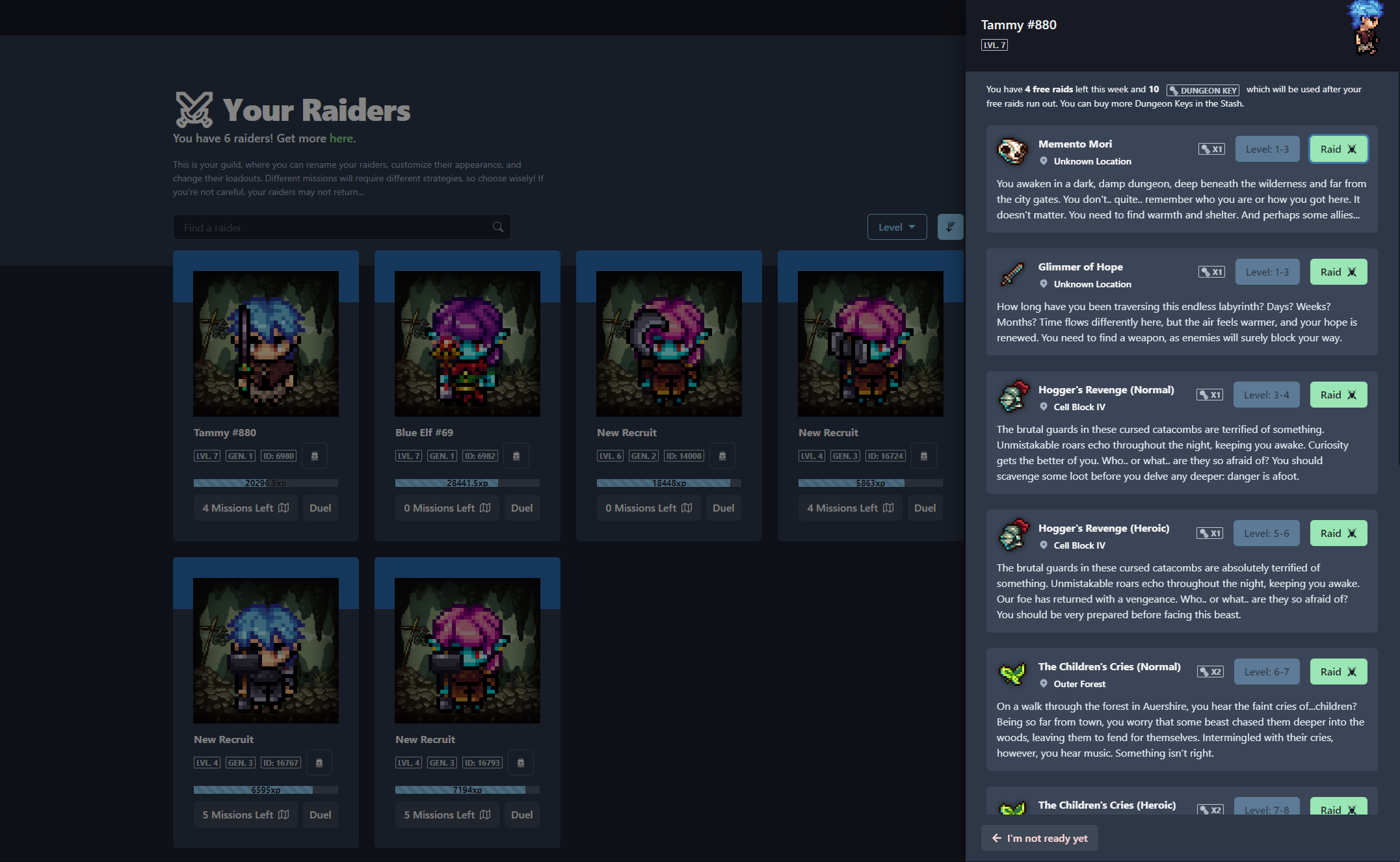 To start playing users can click on the "missions" button, which will open a panel of this week’s available dungeons. Currently there are eight different challenges with bosses ranked levels one through nine. Depending on available stats and gear, a Raider can complete dungeons above its level but this is all dependent on the gameplay style of the user. Users can mix and match abilities from intelligence to strength, which can then favor hit criticals, solid defense, or quick agility. The #Theory-Crafting channel in the Crypto Raiders Discord is a great reference for strategies and tips. 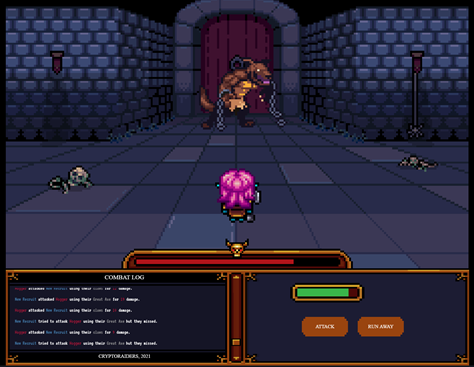 The higher level the dungeon the harder the boss. However, higher level dungeons also allow users to score better in-game gear and experience. Every Wednesday five free raids are given to each character to complete missions and earn loot. Alongside the raids, the experience cap will be increased gradually, rising the maximum level that is achievable.

The Crypto Raiders team is working on a marketplace which will eventually allow each individual piece of gear to be bought or sold. Developers have also proposed a potential "permadeath" mechanic, which would burn a Raider after a failed raid. At present time though, if a Raider dies in a raid, users keep the Raider but gain no experience or gear.

How Do I Utilize Staking and Liquidity to Earn the In-Game Currency?

After running through weekly raids, one might be curious of what else Crypto Raiders has to offer. From play.cryptoraiders.xyz users can interact with tabs for characters, stash, currency bridge and the Raider Bank.

Characters hold all in-game stats, inventory and missions detailed above. Typically though, a user's main focus is the Raider Bank, which houses the in-game currency staking and liquidity pools formed on SushiSwap. In this tab, players are introduced to the central in-game currency bank which can be used to earn more Raiders, raids, and stat resets. Living on the Polygon network, the Crypto Raider’s pool transaction fees are minimal. 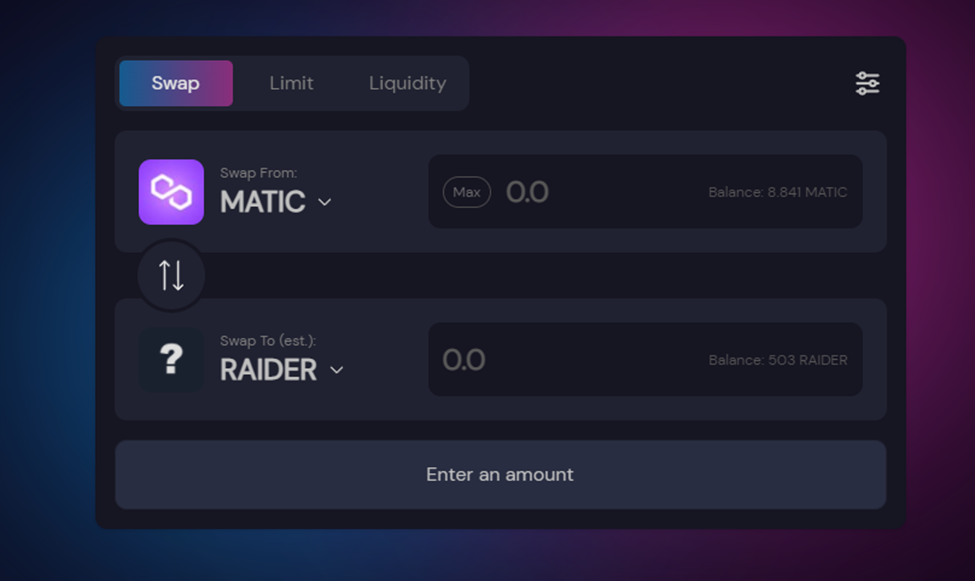 The two Crypto Raider's currencies are $AURUM (the in-game currency) and $RAIDER (the native token). The in-game currency, $AURUM, is used for buying newly added stash items while $RAIDER is utilized for earning $AURUM, more $RAIDER, or trading.

The bank presents one simple staking mechanism and four manageable liquidity pools. Players are presented with  APY (annual percentage yield) and TVL (total value locked) figures to understand how much each pool is holding and producing. The Crypto Raider team is transparent regarding the action of the liquidity pools, releasing weekly blogs with facts regarding the economy as well as gameplay developments.

From inside the staking center, users can click on the $RAIDER and $AURUM tabs and automatically be driven to the SushiSwap page where they can purchase, swap or add liquidity for any of the above outlined actions. The original supply of $RAIDER and $AURUM were airdropped to genesis holders of Raiders, but all players can now earn $AURUM in-game.

$AURUM can be spent with the newly added currency bridge and stash pages on the Crypto Raiders site. At the time, stash holds the two items available for purchase with $AURUM - dungeon keys and scrolls of knowledge. These items allow players to raid beyond the five free raids each week. For 25 $AURUM, a key can be used to grind raiders to a higher level or grab new gear. For 2,000 $AURUM, players can reset the stats on a character to try a new build. Sending $AURUM through the currency bridge allows purchases to be completed within a few minutes with minimal fees. 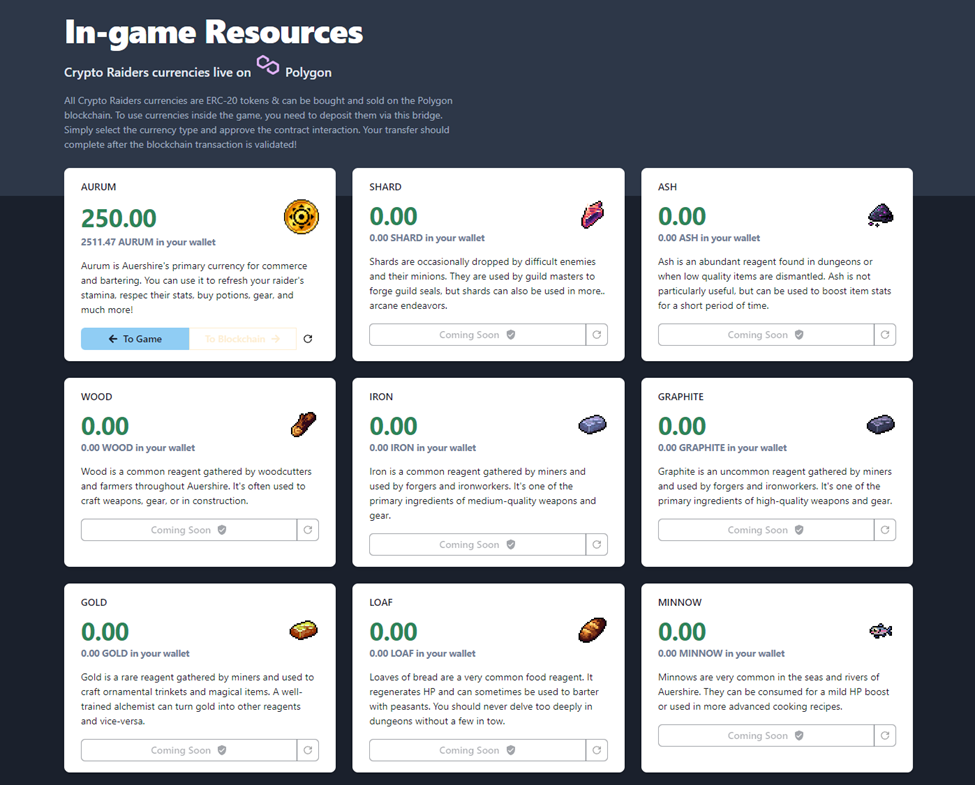 Ready to raid? With a basic understanding of Crypto Raiders and the in-game ecosystem, users can quickly start raiding, staking, potentially start fishing, crafting, and dueling other players soon. On top of fishing, crafting, and player versus player duels, The Crypto Raiders team has indicated MOBS, ownable dungeon bosses, and various other mechanics are in the works!