Intro to WAX and WAX NFTs 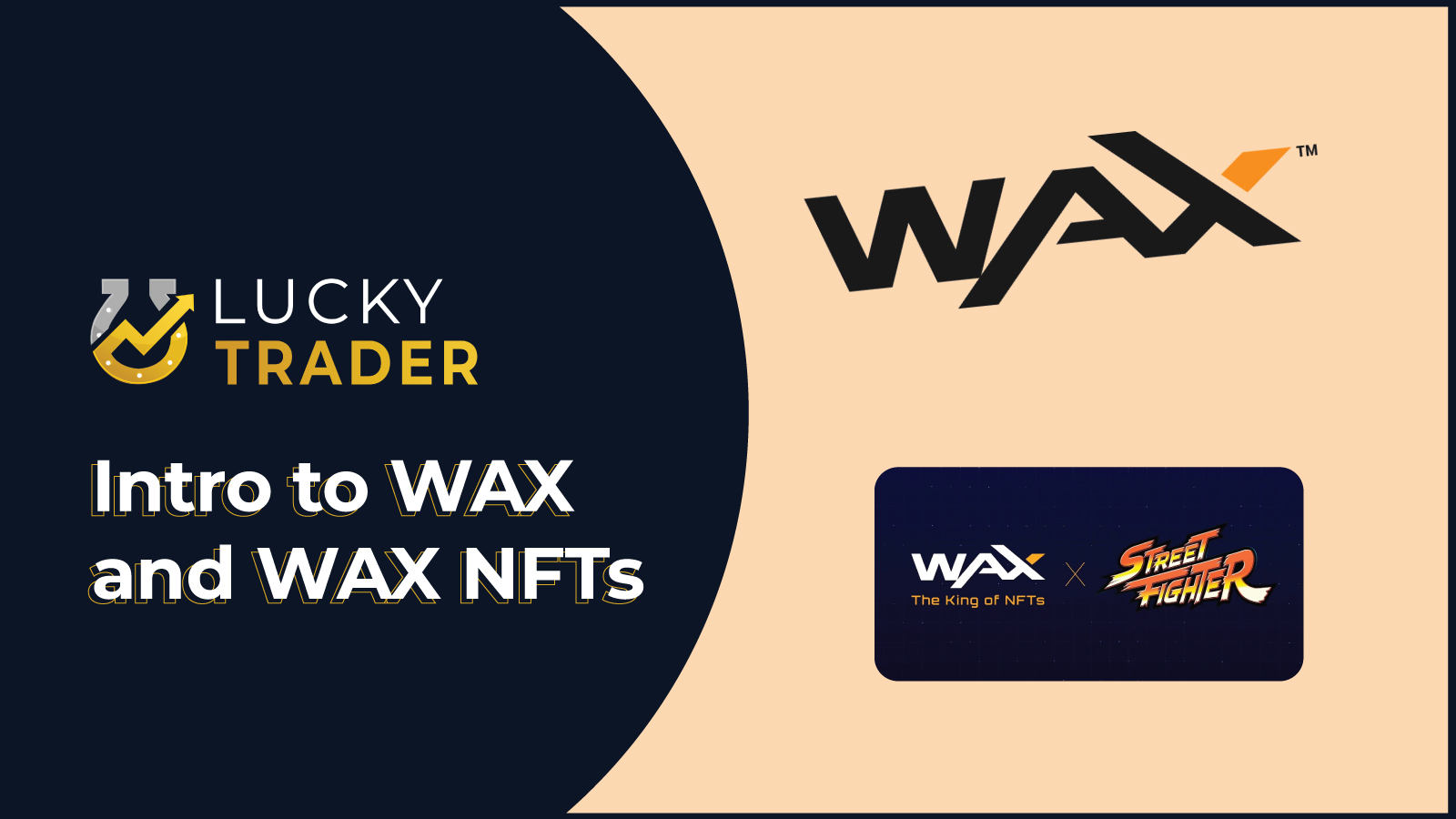 Although Ethereum is currently the most well-known and popular blockchain for NFT investors and collectors, with rising gas fees some may be looking for alternatives. Previously, we covered the Solana blockchain and in this article we’ll discuss another popular and growing blockchain, WAX.

What is the WAX Blockchain?

The WAX (Worldwide Asset eXchange) blockchain bills itself as "the king of NFTs."

Founded in 2017 by William Quigley and Johnathan Yantis, the WAX (Worldwide Asset eXchange) blockchain utilizes a proof-of-stake consensus mechanism, rather than proof-of-work like Bitcoin. For users, this means transacting on the blockchain does not bring about normal transaction fees.

Instead, there are three main components, RAM, CPU, and NET, that allow users to transact. These terms, for those familiar, mean essentially the same as when they're being used in reference to computer processing power. CPU, central processing unit, refers to the power needed to perform a task or, on the blockchain, to complete a transaction. The more CPU available to a user, the more powerful the blockchain works, or the faster a transaction will be completed.

Think of CPU as WAX's version of gas. Higher gas on the Ethereum blockchain helps to move a transaction to the top of the queue and get processed sooner. The same applies when it comes to having more CPU available, except that there is no fee being spent on any individual transaction. NET is essentially the bandwidth available. Most transactions don't need a lot of bandwidth, so this is arguably the least important of the three components. Finally, RAM is short for Random Access Memory and refers to storage capacity. The more assets owned on the WAX blockchain, the more storage space is required.

Whereas transactions may go more slowly without enough CPU or NET, the most essential is RAM. If a user does not have enough RAM, they simply will not be able to transact until they have either purchased more or freed up space somehow, like by selling off other owned assets. 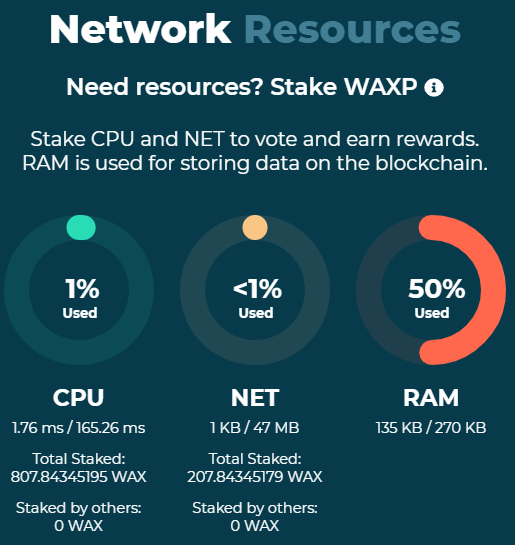 Staking CPU or NET will grant rewards, incentivizing users to help the ecosystem rather than paying high fees. $WAXP can be staked or unstaked at any time, however there is an unlocking period of 72 hours when unstaking. It is important to be vigilant when undergoing this process for the first time, if a user selects "Stake all my WAXP tokens," all assets will be immediately staked and everything in a user's wallet will be locked up for at least three days.

In 2021 WAX upgraded their protocols to make staking and transaction processing even easier. Projects and companies can now stake CPU and NET themselves on behalf of their users, making it cheaper and easier than ever for users to purchase and use their favorite WAX NFTs.

Other benefits of proof of stake include carbon neutrality; WAX has been certified carbon neutral and uses less than 0.001% of the energy that Ethereum or Bitcoin currently use. WAX transactions are also near instantaneous. There are no “gas wars” like Ethereum has when there is congestion on the blockchain; instead, having more $WAXP staked for CPU provides more (and therefore faster) processing power. These benefits have made WAX the ideal blockchain for many play-to-earn games and has grown in popularity specifically for the non-existent transaction fees and environmentally friendliness of the platform.

According to the WAX website, there are more than eight million WAX accounts generating greater than 15 million transactions on a daily basis. While the blockchain is positioned well to handle play-to-earn games given low transaction fees, it has started to generate more collectible NFT projects as well.

Additionally, WAX has seen the NFT ecosystem grow behind vIRL, viral in real-life, style NFTs. These NFTs are tied to a physical item that can be redeemed by owning the corresponding NFT. For example, the famous Funko POP! collections helped propel the vIRL movement with their first NFT project launch in the summer of 2021. The project allowed holders of a rare card to redeem for a unique and exclusive Teenage Mutant Ninja Turtle physical Funko POP! collectible. Beyond Funko, other notable brands and IP - like Street Fighter and Hot Wheels, have flocked to WAX to build their NFT projects.

Participating on the WAX blockchain also removes a lot of the barriers that competing NFT ecosystems like Solana, Tezos, or Ethereum provide. Most collections, like the Funko project, allow users to purchase NFTs with credit card. After seamlessly purchasing with fiat, users can then sell their NFTs on the marketplace for $WAXP, and suddenly find themselves fully integrated into the WAX economy.

Setting up an account to participate on the WAX blockchain is as easy as creating an account on Google.

How to Get Started with WAX NFTs?

Once an account is created and funded on WAX there are several notable NFT marketplaces users can use to expand build their NFT collection on WAX.

AtomicHub, oftentimes called AtomicMarket, is "the OpenSea of WAX." The marketplace boasts the most active users and daily volume for NFT trading on WAX. Plus, the platform even allows for NFTs to be created and dropped directly on site.

Although popular, NFTHive generates less than half of Atomic Market's daily volume traded. However, this can lead to opportunity for price shoppers. Particularly for items that are more scarce and therefore less liquid, searching multiple marketplaces can sometimes lead to either an arbitrage opportunity or at least save a little money on a purchase.

Simple Market is not as polished and does not tend to work as well as AtomicHub or NFTHive. The search function oftentimes does not work properly, listings can be formatted in a confusing fashion, and even filtering will not always be executed accurately. The advantage that Simple Market brings is the ability to buy and sell FTs, or fungible tokens. For many WAX-based games the FTs can be almost as important as the NFTs to play, and Simple Market (as of now) is the only place to purchase these fungibles.

Neftyblocks started out as simply an unboxing site, but has sine transformed into a much more useful dApp. The site now allows for unboxing, blending, has its own marketplace, and even its own $NEFTY coin to use as a $WAXP alternative when shopping the NeftyBlocks marketplace.

What are the Downsides of Using WAX?

There are some aspects of the WAX blockchain that can be confusing for new users.

The WAX blockchain makes use of three notable tokens, $WAXP, $WAXE, and $WAXG. $WAXP, the native token, is used to transact. $WAXE allows for the bridging of $WAXP to the Ethereum blockchain, and $WAXG was launched as a governance token that can also be earned via staking.

Popular WAX NFT drops can also lead to problems for unprepared buyers and inexperienced users. Although there are no gas wars like on Ethereum, when the blockchain gets overloaded with a lot of transactions those who have staked more $CPU or have the fastest hardware processors will win.

WAX NFTs have a tendency to be more volatile and more directly tied to the underlying coin’s value than some other blockchains’ NFTs. This is a direct consequence of tethering to $USD. On the WAX marketplace with the most active users and daily volume, AtomicHub, users are given the option to list items for sale based upon a fixed $USD price, rather than a fixed $WAXP price. When the $WAXP/$USD price rises, listed NFTs will automatically drop, causing a chain reaction whereby other listings are lowered to try and match or even undercut what appears to be a falling market.

For $WAXP holders in the United States, depositing or withdrawing can $WAXP can be difficult because there are so few exchanges that support trading of the coin. For example, popular crypto exchanges in the U.S., like Coinbase or Gemini do not actively support $WAXP. Instead, buying and exchanging $WAXP back and forth to fiat is only supported by KuCoin and Bittrex, which may have restrictive terms of service for United States residents.