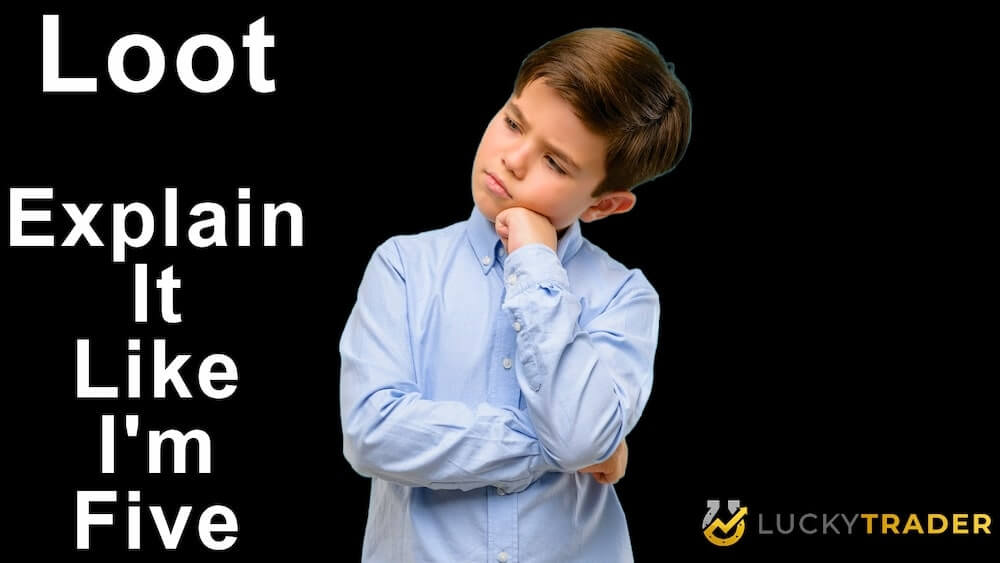 Have you been seeing a lot of talk of katanas and divine robes? Has your Twitter feed been dominated by the following, black canvas and white text? Yeah, ours too. But today, we’re going to explain Loot, like you’re five.

It only took a week for The Loot Project to take the NFT world by storm. What started as a simple tweet by Dom Hofmann, has turned into a sprawling community project, showing off the brilliance of the NFT community and the unfathomable speed at which it operates.

What is the Loot Project?

The Loot Project is a new spin on decentralized game building in NFTs. Instead of a being built by a gaming company and handed down at completion, the project has started with only one building block, Loot Bags (for Adventurers), and it is up to the community to decide how they are used, valued, and expanded on. The handy visual guide below showcases how Loot is different than typical NFT projects. It;s not up to the creators to drive value to Loot, it's up to the collectors, to build and expand the ecosystem.

This is what I have been SUPER EXCITED about...

Loot is something different. It's something that has never been done before ever.

It's a paradigm shift in NFT space.

What are Loot Bags?

Loot Bags (for Adventurers), are a collection of 8,000 unique bags of adventurer gear and the initial project building block. Confusing to many, the bag itself is merely a black canvas, with eight white lines of text, each a component useful for a potential adventurer.

The items inside each bag are: a piece for an adventurer’s chest, foot, hand, head, neck, ring, waist, and weapon.

Inside a bag you might find items such as “Demon’s Hands,” “Dragon Crown,” or a “Bone Wand.” On secondary markets thus far, a heavy premium has been given to items like katana and divine robe.

At the core, the value and meaning of Loot Bags (for Adventurers) are intentionally limited and ambiguous. A Loot Bag is merely a foundation, for which hopefully many, derivative projects grow. As more and more pieces are added, an entire Loot universe can be created and enjoyed.

What is a Loot Derivative Project?

On its own, Loot Bags (for Adventurers), would merely be a few lines of text.

However, as hoped, a community of individuals has formed around Loot, and a whirlwind of advancements have already been made, particularly through the building of derivative projects. Derivative projects are projects designed to iterate on and add value to the overall Loot ecosystem.

Since the project is decentralized, anyone is able to participate, and create a derivative project of their own. Yes, even you!

Here are some of the most popular derivative projects to date (full list can be found on lootproject.com):

And there are many more derivatives popping up with increasing velocity as a community of builders aims to create a thriving Loot ecosystem. In many instances, these derivative projects allow existing Loot Bag holders to claim a free, or low cost item to add to their Loot collection.

Additionally we should note that the many derivatives spawning around Loot, do not need to be exclusive to the Loot project. Because these various building blocks are being created on the Ethereum blockchain, it’s not out of the question that a derivative project focused on “armor sets for adventurers” could ultimately be a building block in a different Ethereum game or Metaverse.

Consider the difference this creates from traditional project or game building…imagine if Fortnite, Roblox, and Minecraft could share the same game items and currencies. Yeah folks…this is a pretty cool experiment.

Note: As this is an open-source project, derivative projects are often built with unaudited code. Please proceed with caution!

Is it too late to get involved with Loot?

With increasing popularity and a unique take on game building, the original Loot Bags (for Adventurers) have seen a tremendous growth in price, so much so that many have felt unfortunately priced out.

However, Dom Hofmann has since announced Synthetic Loot, Loot that is available to anyone with an Ethereum address.

What does that mean?

If you have an Ethereum address, you have Synthetic Loot. You don’t have to do anything, you just have it.

But! If you wish to see what your wallet holds…head to Dom’s tweet (linked below), head to the Etherscan contract page, paste your Ethereum address into any or all of the sections for bag components and hit “query.”

For example, paste your address in “getHand” and after querying, you’ll discover your Synthetic Loot Hand component!

To utilize Synthetic Loot, it will be necessary for Loot ecosystem developers to recognize it moving forward, but the hope is that they will ensure Synthetic Loot has a place in the evolving ecosystem, allowing more participants to enter, build, and play.