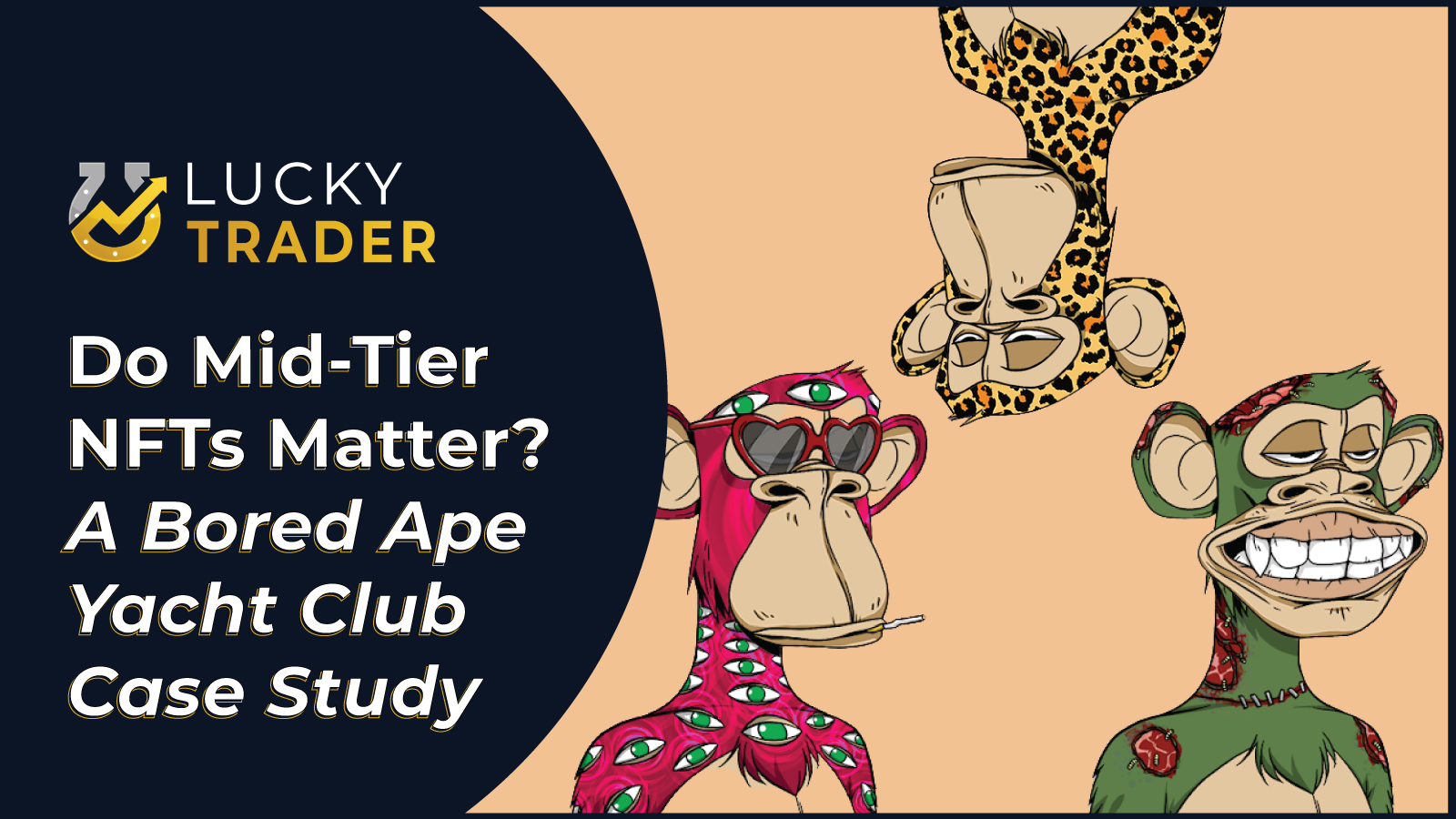 The NFT space is obsessed with rarity and floor prices. Collections are evaluated on their highest and lowest sales. Alien punks are the most desirable and sought after, but the lowest-listed NFTs in a collection are used as a measuring stick for the overall success or failure of the project.

But what about mid-tier NFTs? What about cheetah and zombie fur apes from Bored Apes Yacht Club (BAYC)? Are they more important than brown fur apes? How do they measure up to gold fur apes?

This article examines Bored Ape Yacht Club’s trait rarities as a case study for answering the question, do mid-tier NFTs actually matter? Future analysis will determine if the final conclusion can be applied generally across other NFT projects and collections.

What Is a Mid-Tier NFT?

First, let’s define a mid-tier NFT. To leave open the possibility of applying the eventual conclusion across a wide spectrum of NFT projects and collections, we're avoiding a technical marker in this example.

For our purposes, a mid-tier NFT has a trait(s) that is more significant than common, floor NFT trait(s) but is not the most sought after or rarest trait(s).

Defining the mid-tier also requires some qualitative analysis. Most seasoned NFT collectors or traders have a good grasp on this, but let’s outline a basic checklist for newcomers.

In order to be considered in the mid-tier the NFT should be quantitatively rarer than basic traits and have one or more of the following: a trait(s) that is visually appealing and immediately noticeable to the viewer; a trait(s) that is historically significant to the project or collection; and a trait(s) that increases the overall utility of the NFT.

A definition beyond the aforementioned criteria could restrict a more wide-ranging application of the final conclusion to other NFT projects and collections or presuppose information regarding price action, which would be assumptions we want to avoid.

How Do Low, Mid, and High-Tier BAYC NFTs Compare?

Let’s get the obvious analysis out of the way - yes, mid-tier NFTs are slightly higher in price than their low-tier, or floor counterparts. But how do they stack up in terms of relative rarities and floor prices across the board?

Let’s take a look at Bored Apes Yacht Club. The most valuable single trait is gold fur, so we will use fur traits as an example.

Below is a chart showing all BAYC fur types and how many of each fur trait exist. 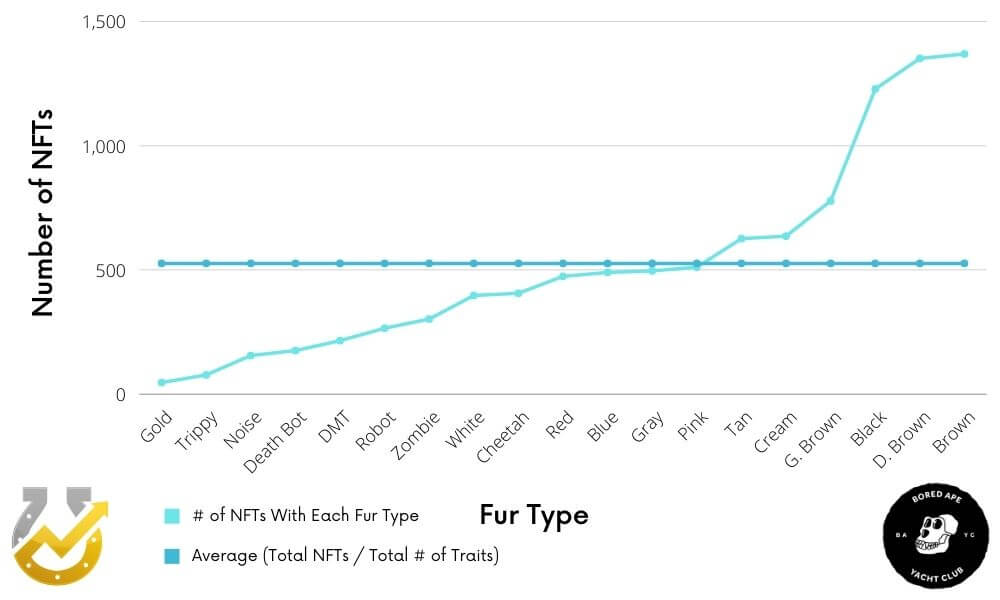 As expected, there is an almost linear line from gold fur (the rarest) to brown fur (the most common). If floor price is directly linked to rarity, we’d expect to see an inverse chart when looking at floor price based on fur type, with gold fur as the highest and brown fur as the lowest. 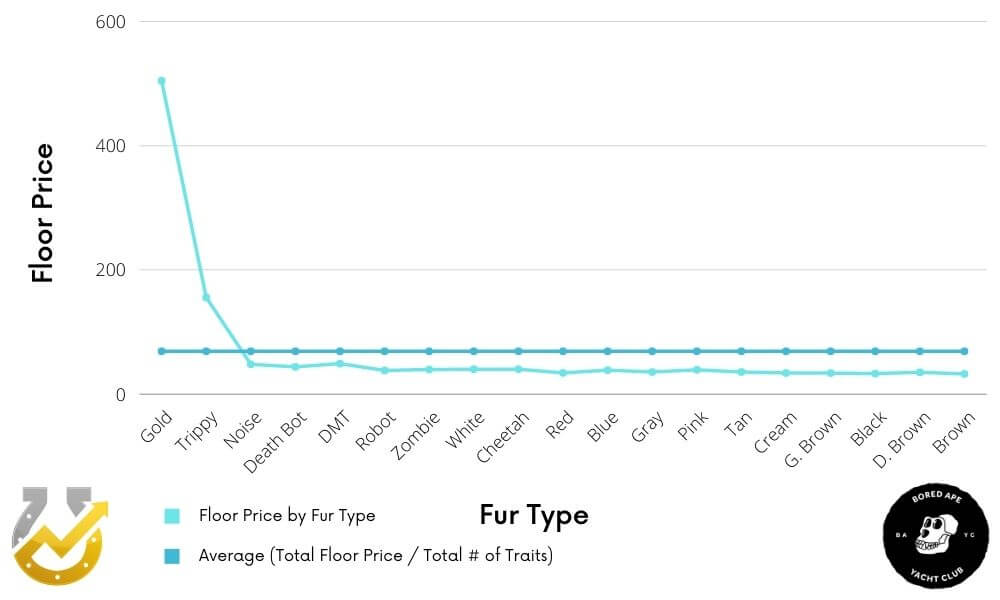 What we get instead is a flat line followed by a small spike for trippy fur and a massive spike for gold fur. The difference between brown, dark brown, black, golden brown, cream, tan, pink, gray, blue, and red fur is near nonexistent in terms of floor price. More interestingly, cheetah, white, zombie, robot, DMT, death bot, and even noise fur types are rather flat in comparison to trippy and gold fur.

Let’s look at this same phenomenon in another way. 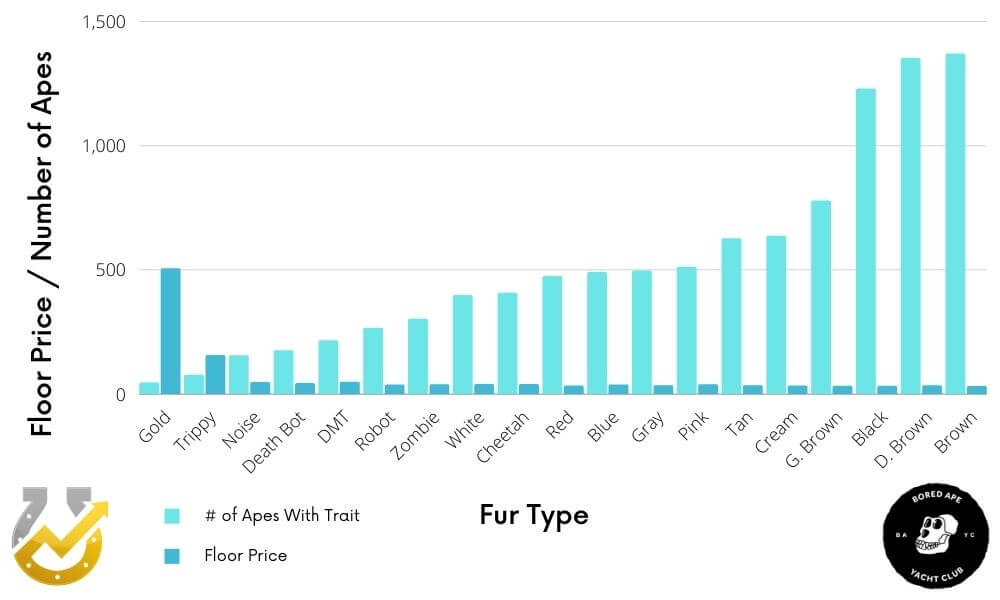 Take a look at these donut charts. 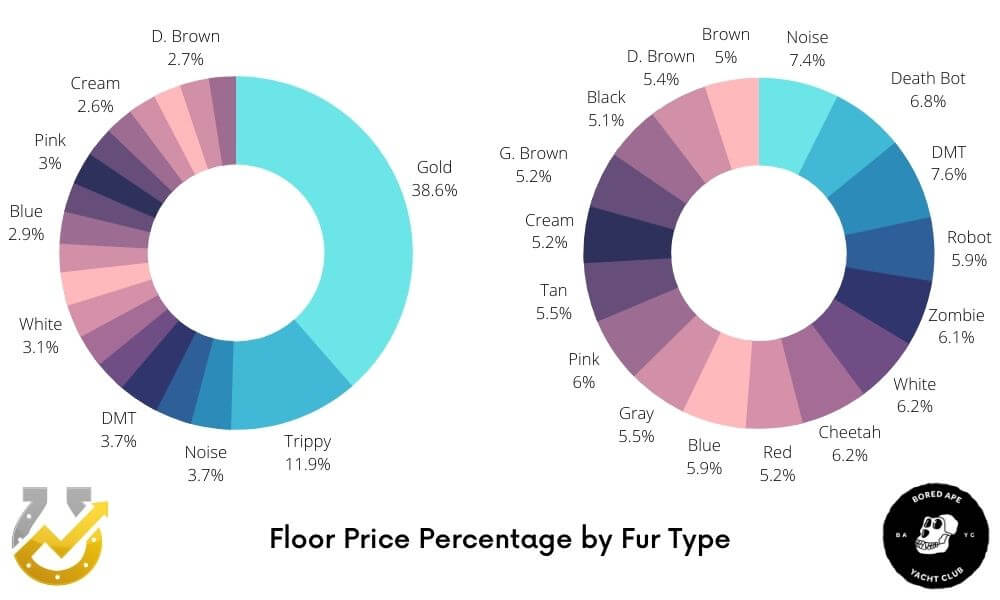 The larger the percentage, the more valuable the trait is compared to the rest of the field. As expected, in the chart to the left, the gold and trippy fur traits dominate most of the donut, showcasing their dominance as fur traits. The previous bar and line charts give us the same visual. But the chart to the right shows us that even when the gold and trippy fur traits are removed, the most valuable mid-tier traits are still barely more valuable than low-tier traits. DMT is worth 7.6 percent of the total floor price (excluding gold and trippy), the highest of all traits.

This should make it abundantly clear that mid-tier floor prices are slightly higher than low-tier but insignificant in comparison to the high-tier floor prices. Rarity clearly matters -- the difference between the floor price of a golden ape and a floor ape is hundreds of thousands, if not millions, of dollars -- but it only seems to significantly matter for the rarest traits.

Fur is obviously not the only trait that matters when evaluating the rarity and price of a Bored Ape Yacht Club NFT. Blue laser eyes, black suits, pizza mouths, and king's crowns all have inflated floor prices. And it gets even more complicated when considering multiple traits at the same time.

This is where "rarity scores" come into play, which is a useful tool for determining an NFTs overall rarity in comparison to the rest of the field. The score does not always consider the nuance of all trait types, which is why qualitative analysis is important in the NFT space, but it is good for identifying overall trends. To learn more about the Lucky Trader rarity scores, refer to our rarities guide.

Let's take a look at how the floor price of Bored Apes Yacht Club NFTs responds to increased rarity scores. 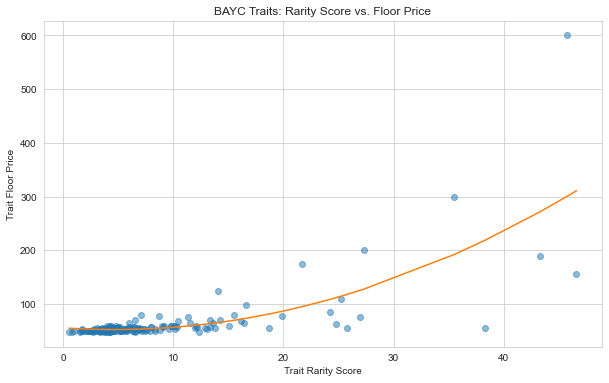 Note: Statistics were taken from Lucky Trader's database on November 16, 2021. A special thanks to @LambertChu_ for these numbers.

The reason for this conclusion is unknown. The NFT marketplace and its collectors and traders might be inefficient. A historical lack of effective tools for evaluating NFTs' rarities could be the cause. Collectors and traders might just not care about mid-tier NFTs. Bored Ape Yacht Club could be a special case. High-tier NFTs are likely owned by long-term collectors, which might cause dramatic supply shock, and this could happen to mid-tier NFTs later on.

The NFT space is still in its infancy, and market conditions are always subject to change. This is a cautionary note that the value of mid-tier NFTs could become dramatically different over time.

Different projects have different utilities, too. For example, Cool Cats NFT has a built-in utility for holders in each tier. This gives a more uniform increase in value from low-tier to mid-tier to high-tier NFTs. It is beyond the scope of this article to dive into Cool Cats valuations, but know that general market tendencies are not necessarily true of all projects for a variety of reasons.

It’s important to constantly analyze market trends and confirm or reject assumptions and speculations. Fortunately, Lucky Trader offers free tools to do just that. Jump in and examine the data for yourself.