Should I Stake Or Sell My $LOOKS Token From LooksRare? 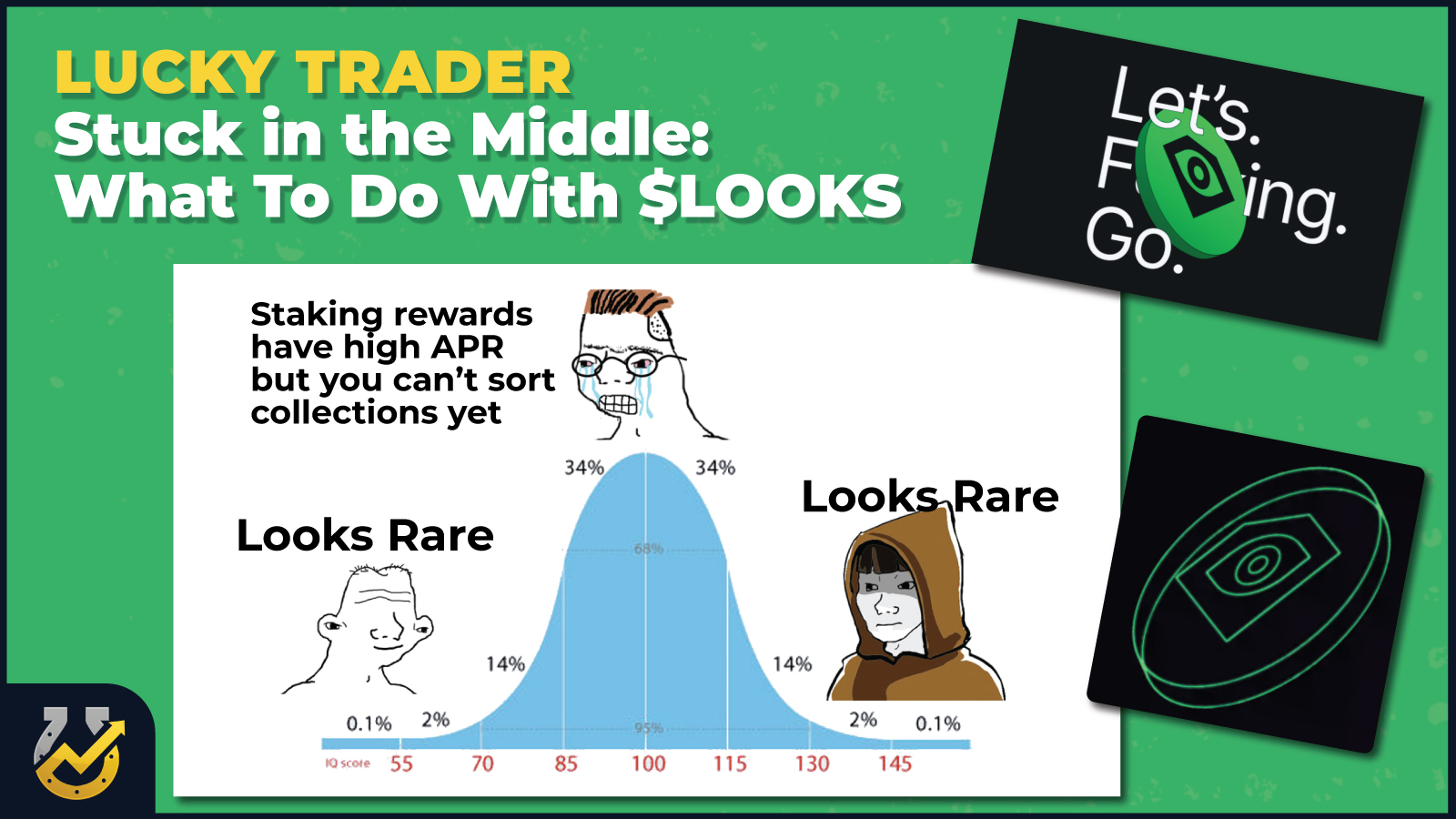 Yesterday morning, a new NFT marketplace launched — Looksrare.org — and set up a token claim ($LOOKS) for OpenSea users who traded more than 3 ETH there from June 16 to Dec. 16, 2021.  Claimers now have the ability to stake or sell their $LOOKS token from LooksRare, but what should they do?

If you’re like me, you’re currently overanalyzing what to do with your claim. (If you haven’t yet claimed, see this helpful article, then read the following guide.)

Like it or not, most of us fall into the middle of the Bell curve meme. If you’re as saddled with this affliction as I am (and the other 79.9999 percent), the best course of action is to embrace your middle-IQ-ness and heavily consider all costs and benefits.

To help you with your decision, let’s do the middle IQ thing and take a look at the pros and cons of $LOOKS and how the new marketplace stacks up:

Since the NFT boom, OpenSea has struggled at times to keep up with demand and endear itself to the NFT community. A recent check of the OpenSea site status page reveals 29 incidents in the past three months, including an ongoing issue as of Jan. 10, where the site shows an active banner informing users it was “currently under maintenance which may result in delayed collection data” including floor prices.

Newly installed OpenSea CFO Brian Roberts also made headlines when he told Bloomberg that OpenSea was planning an IPO, not a token. He later called the reports “inaccurate” but earlier this month, OpenSea announced another round of funding ($300 million) at a $13.3 billion valuation.

The issues have opened up opportunities for competitors, such as Coinbase, which offered up a waitlist for its upcoming NFT marketplace, and LooksRare, which popped up on the radar around mid-September after tweeting a tease for a new NFT marketplace. The tweet came right around the time Nate Chastain left his position at OpenSea over insider trading allegations.

After going dormant for a bit, LooksRare launched Jan. 10 with a pared-down site, but provided something OpenSea users have been clamoring over for months: a token.

In late December, several big names in NFTs and crypto — @pranksy, @dingalingts, @DeezeFi, @andy8052, @hunterorrell, and @Cryptopathic — pinged wallet alerts by sending dozens of ETH to a $LOOKS token contract in what Orrell called an “angel investment round.” Two weeks later, with the announcement of the new marketplace, came the token, and a few more bonuses for people who wanted to reinvest in the platform.

LooksRare offers staking rewards with 672 percent APR as of this writing and a LOOKS-ETH liquidity pool with 765.7 percent APR. (Read more about the tokenomics here). There are transaction fees on LooksRare (2 percent), but the fees are returned to those staking $LOOKS. In contrast, OpenSea charges 2.5 percent fees for each transaction.

claimed my $LOOKS and i'm staking it

LooksRare also incentivizes trading by sharing fees with users who deal in specific collections, rewarding them daily with $LOOKS based on their proportion of volume. The marketplace is also incentivizing users with additional $LOOKS, rewarding traders with 2.86 million $LOOKS per day in the first 30 days and reducing it over time. As long as the APRs stay relatively high, stakers and traders can realize significant daily rewards.

Tools You Can Use

In addition to tokens, LooksRare announced a few features, including one that OpenSea removed recently: transaction-free private sales. LooksRare also says it will consider verifying derivative collections and has shown an aversion to locking down wallets and NFTs based on Twitter comments. Buyers can also place floor bids on entire collections, increasing the liquidity in what can sometimes be an illiquid market. More information on LooksRare features can be found here.

$LOOKS is the fourth major airdrop in the last few months. Of the previous three airdrops ($GAS, $SOS and $ENS), two peaked early within the first 24 hours before dipping and leveling off. $ENS, the token claim for the Ethereum Name Service, was the first and peaked about 19 days in at nearly $81, after about 68 percent of the claims went through. $ENS is now $25.

$LOOKS, which has a maximum supply of one billion, is also approaching a $3.47 billion fully diluted value market cap. For comparison SuperRare and Rarible have $764 million and $334 million FDVs, respectively.

Eh. Selling first few days has actually worked out very well for $RARE, $ENS, and $SOS. I don’t see why it would be any diff for $LOOKS. This is because first few days are when these airdrops get the max hype. https://t.co/2ISESOMylf

Also, each day, around 9 p.m. ET — for the first 30 days — more than 2.86 million $LOOKS will be dropped to those who traded NFTs in eligible collections. If those users decide to cash in their rewards, the price of $LOOKS could be significantly impacted by the dumpers. As of Tuesday afternoon, there was only $12 million in liquidity in the LOOKS-WETH pool. The trading rewards, at the current price of $3.40 $LOOKS, would be more than $9 million.

While OpenSea has its issues, LooksRare already experienced the perils of the NFT boom. The site encountered a DDOS attack its first day and launched before several key features were live.

Similar to OpenSea, LooksRare users will need to pay a gas fee to list the first NFT in a collection. Also, users need to pay gas fees to cancel and unlike on OpenSea, users can’t lower the price without canceling and paying gas. There is also no sorting available in a user’s personal NFT collection or when searching for an NFT to buy (though a message says it’s “Coming soon”).

There are also several issues outstanding, including issues claiming $LOOKS for those with hardware wallets, such as Trezor. Without a fix, those with Trezor wallets could miss out on the claim, which expires Jan. 20.

The Penguin in the Room

While popular crypto names have helped $LOOKS gain traction, one infamous name involved in the seed round has not inspired much confidence in the future of the platform. @Colethereum, who was voted out of his Pudgy Penguins project and reportedly paid 750 ETH to walk away from the IP and brand, invested 37.5 ETH in the marketplace.

Now that I know Cole was part of the $LOOKS seed round, I'm perfectly happy having sold mine.