The NFT art and collectibles markets are heating up, highlighted by yesterday's 2,500 ETH Ape CryptoPunk sale. Liquidity remains incredibly low though, with just $15.7M in OpenSea volume recorded yesterday - so we are still far from a bull market.

With that said, the market sentiment certainly feels more bullish and one area getting the most attention as of late is Art Blocks and the overall digital art market. And there are two marquee drops in that sector today to focus on, which will be great tests of this market's newfound love for art.

Art Blocks has had about a one-month run of new mints have solid success on the secondary market, and project floors have secretly been moving up over that time. Well, the secret's out and everyone seems to be talking about Art Blocks now, which is good and bad for today's mint.

Today's drop Running Moon by Licia He is likely the most anticipated Art Blocks Curated drop of 2022. This is based on the market tailwinds, general community sentiment, and reactions to the aesthetics of this set which have been very positive. Licia's new set is inspired by a combination of stained glass and watercolor styles, evident in her outputs, and the theme of the project from the Art Blocks site is "a search for boundaries between structure and fluidity, precision and errors. It is a quest for harmony."

Licia provides much more insight into Running Moon on her personal description page here, going into depth on the three major elements of the pieces: expansion shapes, segmenting lines, and texture. Anyone looking for a deeper understanding of the potential output styles and rarities should spend time here before today's mint.

The mint mechanics remain unchanged with the dutch auction starting at 3 ETH, exponentially decreasing to a floor of 0.2 ETH for the set of 500 supply. Now the million-dollar question is - where does this mint out?

It is evident that flippers and botters are going to play today's drop. Monday's Factory project of 555 supply was heavily botted and sold out in mere seconds, with half of the supply listed on the secondary in the next hour and the project floor price now below the effective mint. While the additional liquidity and attention is certainly a net positive, it makes the mint much trickier to navigate.

Almost every Curated mint that sells out too high and sees a large percent of the supply listed on secondary underperforms in the near term. That's the risk for today and a very real risk. The general sentiment is that this sells out around the 2-2.25 ETH mark right now, though no one will be surprised if this mints out at 3 ETH at the top. The problem is, not many sets command a 3 ETH floor price, and if this does mint out at that high level there's a good chance the true dutch auction will play out on the secondary market (and likely dip below mint cost).

There are two main ways to play this: set a price you are comfortable paying and mint at that price or let the FOMO play out and come back as a buyer once the dust has settled in a few days. The latter gives up the rare lotto aspect of the mint but is likely to provide a nicer entry. But of course, the strategy all depends on the final mint price - if it somehow gets to 2 or lower, it's likely going to be a smashing success. At 3 ETH though, it's much harder to predict early success.

The genesis collection for the hyped art pass GODA launches today, as contemporary artist Nina Chanel drops her Super Cool World project. This generative PFP-style art project leverages features of Nina's traditional art style in her new digital medium, and she intends to use this set as a utility pass to allow collectors to follow her journey. The potential utility includes merch, airdrops, access to future drops, and IRL events.

The mechanics of the drop include a two-part mint, with GODA Pass holders able to mint two NFTs each for 0.5 ETH each for 24 hours starting today at 10 a.m. ET, and then PREMINT raffle winners will have the chance to mint an additional 3,000 NFTs at 0.5 ETH each (one per wallet) starting tomorrow morning. That brings the total supply to 5,080 NFTs.

The supply and relatively high price point are the risks to this new unproven collection and will be a great test for this market's demand for art outside of Art Blocks. The bull case is that Nina's art fetches 5-figures in the traditional art world, this drop was featured in Colombo Medici's weekly newsletter (extra attention), her promised utility for holders, and the fact that this is a double-genesis drop - the first for both GODA and Nina.

There is a rare lotto, with 100 rares in the collection each assigned a number 00-99, which Nina hinted may receive special bonuses.

Overall the early market action on secondary will likely determine if the presale for GODA pass holders mints out; if it mints 2,000 in presale and the floor holds over 0.5 ETH, the mint will likely take care of itself in the raffle sale. Otherwise, this may take a while to mint out. But this one may also benefit if the Art Blocks mint goes high today, as traders may have some ETH "burning a hole" in their wallets and looking to spend. But the last-minute surge in GODA floor price from mid-7s to uppers 8s and 9s is a great sign for demand, so we shall see how it plays out.

❕ITS ALMOST TIME❕
in less than 24 hours the mint for the GODA genesis collection and @ninachanel’s first ever NFT project
“NINA’s SUPER COOL WORLD”
will go live!

Here’s a thread of all the mint day info you need pic.twitter.com/SqY3qVDcJU

Tuesday was a relatively big day of news for the NFT space, highlighted by big sales, new marketplace success, and new fundraising.

The top story and showstopper yesterday was Punk $4464 selling for 2,500 ETH, tied for the fourth-highest all-time punk sale in ETH terms. This ape punk with the eye mask and vape, previously dubbed the vape ape, is one of just twenty-four apes in the punk set, making them twice as rare as the BAYC gold apes which have been selling in the 600-800 ETH range as of late. The punk market has not yet really reacted to the sale, with the floor up just 1% on the day at 76.8 ETH (though it's up 64% on the month).

Next up for headlines has to be Gamestop, which just launched their NFT marketplace and managed over $1mm in sales volume yesterday. Their native mp volume seems to be driven by their own niche set of NFT projects, as volume leaders included MetaBoy, Ordinary NFT Cards, and Power 2 The Apes!, projects which are not making a dent on OpenSea or other marketplaces. Gamestop leverages an ETH layer-2 platform and has also recently launched its own GameStop Wallet, allowing collectors to hold their digital assets. If they can continue this volume, traders will have to take notice and start paying attention to this hot new marketplace.

Kevin Rose and the PROOF Collective team made a splash by releasing video and notes from a recent team meeting, with images of the team's overall roadmap included. The roadmap outlines plans for PROOF Media, PROOF Collective, and Moonbirds (as three verticals), and notably mentions sub-projects Moonbirds II and Ravens as separate line items. This has led to much speculation about what's to come for the Silver Nest for Moonbirds, which will be live on July 20. The market didn't rent to the news, as Moonbirds were down 5 percent on the day at 27.5 ETH.

The last major headline is from Animoca Brands, which completed a $75.3M fundraising round at a $5.9B valuation, leveraging the funds to invest in blockchain games and platforms. Made famous "or infamous" to current NFT traders through their ties to Yuga Labs and The Otherside, this firm has active investments in Axie Infinity, Dapper Labs, The Red Village, and more, and thus has their hands on several aspects of the gaming and play-to-earn NFT sectors. Certainly, this is a bullish raise for the firm and good news for the projects it's invested in.

Though there are some major bullish tailwinds for NFTs in recent Punks, BAYC, and Art Blocks action, trading across Mon-Tues of this week feels skittish and potentially worried about today's pending inflation data to come out. The week ending Monday saw a huge wave of green, with 29 of the top 30 projects by floor price in the green on the 7-day. But red is back on the board today, with just 6 of the top 25 projects in the green on the day. The red action was not too bad at least, with most projects just giving up 1-6 percent on the day.

A few new joiners made it to the top ten, with YOLO Holiday, NICE Official, and Bored & Dangerous making the top list though with mixed results on the day.

Notable winners on the day included The Saudis up 26% to 0.89 ETH, GODA up 15 percent to 8.9 ETH, and WZRDS with their floor up ~100% to 0.25 (based on WETH offers) and its new half-skull NFT reaching a 0.2 ETH floor (though the market was very divided on their recent burn tactic and its ethics). 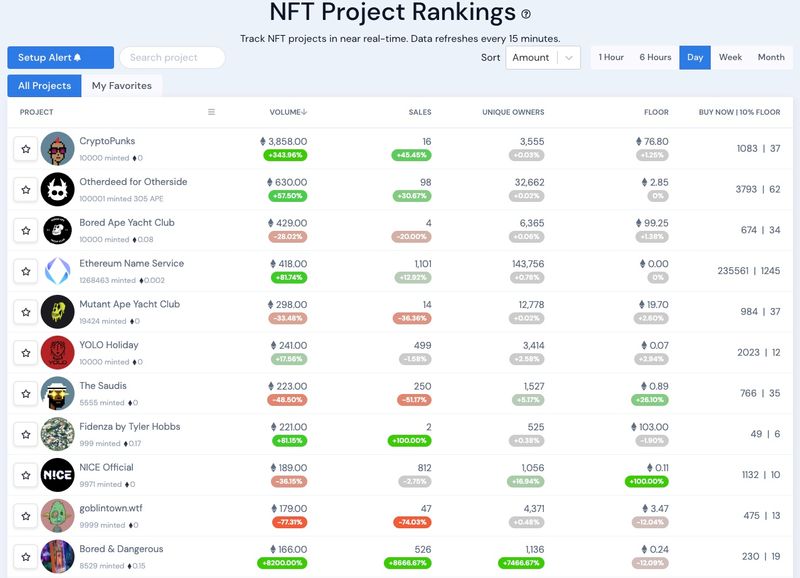 The crypto markets chopped Tuesday with BTC holding at $19.8K and ETH at $1,080 at the time of writing. Equities seem to have chopped the first two days of the week as well, down Monday but back up Tuesday, as all eyes turn to today's CPI print.

According to FXHedge, the White House is already bracing the public for bad inflation numbers today. Futures markets are predicting an 8.75 percent print or higher, and if it comes in higher it could certainly send the markets down as it has in the past. Overall it seems most traders are on the sidelines waiting for the results and will act based on the market reaction.

The NFT markets, at least PFPs, seem to be in that same wait-and-see mode, with low volume and chop for the first two days of this week. Art Blocks is in full send though, with a new whale GSRblue taking the generative art community by storm, sweeping several floors yesterday and already gaining notoriety. The themes of this week seem to be Factory projects with nice aesthetics and lower supplies making the biggest gains, with several (Strata, Daisies, Collapsed Sequence) up over 100 percent in daily trading.

All eyes now turn to today's Curated drop, which is the mint of the day and will likely be the primary liquidity attractor. A bullish mint and secondary for Running Moon will likely send the Art Blocks world into full euphoria, but a bearish mint (botted and secondary below mint) will be a temporary setback.

Good luck out there to those minting today and make sure to stay up to date with breaking news at the Lucky Trader newsfeed.