How to Get Started With The Red Village 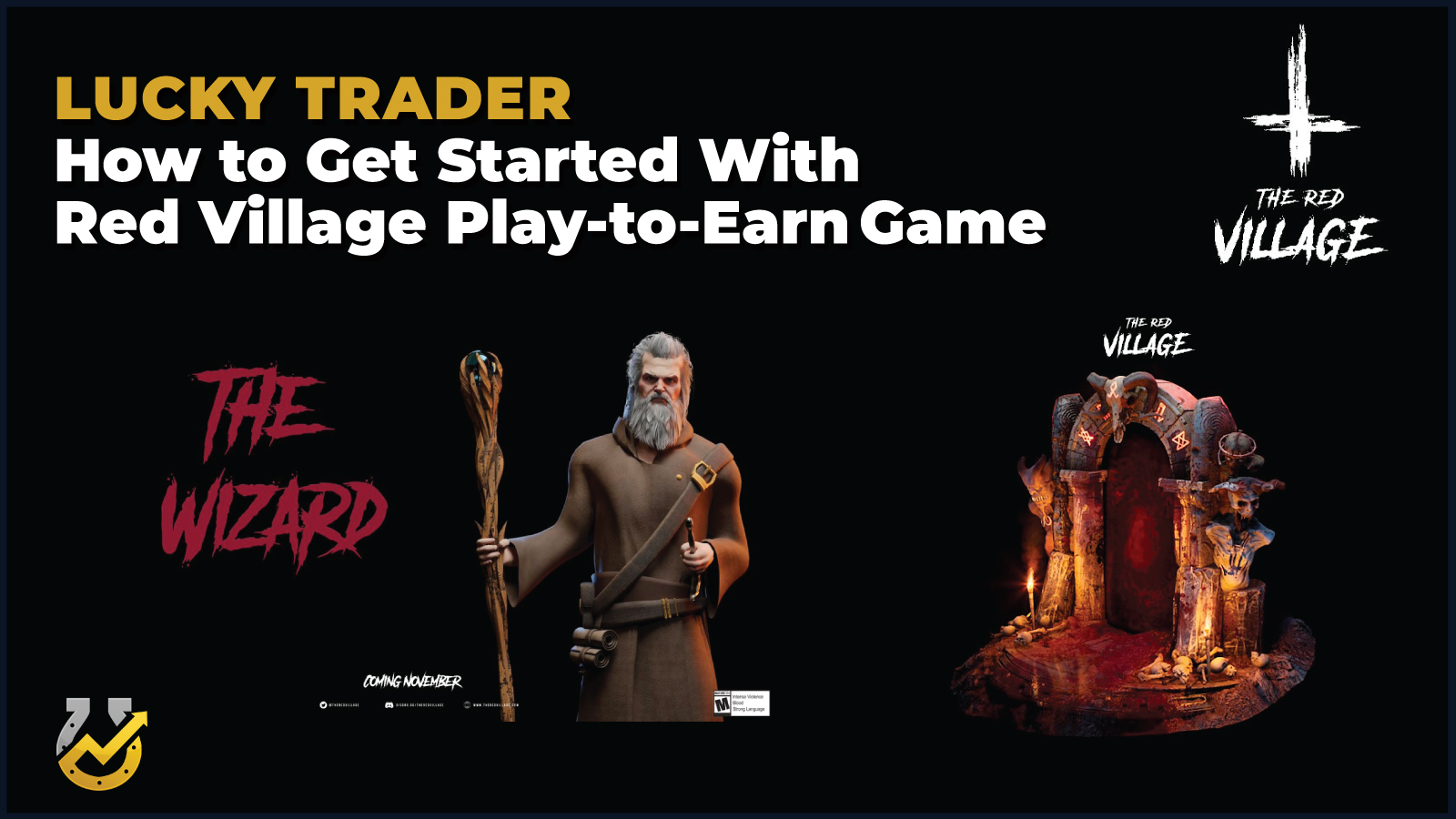 What Is The Red Village?

The Red Village is a first of its kind NFT-based multiplayer fighting tournament game operating on the Polygon blockchain. Harnessing the concepts of play-to-earn and competitive gaming, players collect, battle, and summon Champions that are their own uniquely identifiable tokens on the blockchain. The backdrop for The Red Village is found in the depths of the Forgotten Forest of the Seven Realms, isolated from the world by the Endless Ranges - a massive mountain range. Within the Red Village, the Blood Queen rules and dooms all Champions to fight for all of eternity. Here, players compete for glory!

How to Get Started With Red Village

To enter the Red Village game, you’ll need to be familiar with Metamask, Opensea, and the Ethereum and Polygon blockchains. To get started with MetaMask, you can refer to our Beginner's Guide to MetaMask.

There are a few fundamental aspects of the game to go over before we get anywhere near purchasing your first champion. For starters, each champion has a set of characteristics that make them unique. These are:

Five classes exist in the The Red Village ecosystem. Each class has its own strengths and weaknesses, special moves and fighting styles. The five classes are Barbarian, Druid, Wizard, Ranger, and Paladin. With callbacks to traditional fighting games and MMORPGs, The Red Village surely hopes their players can get right into stride harnessing the abilities and workings of their favorite class of Champion. Further, each class has specific ranges for their strength, defense, accuracy, special moves, and fighting speed. 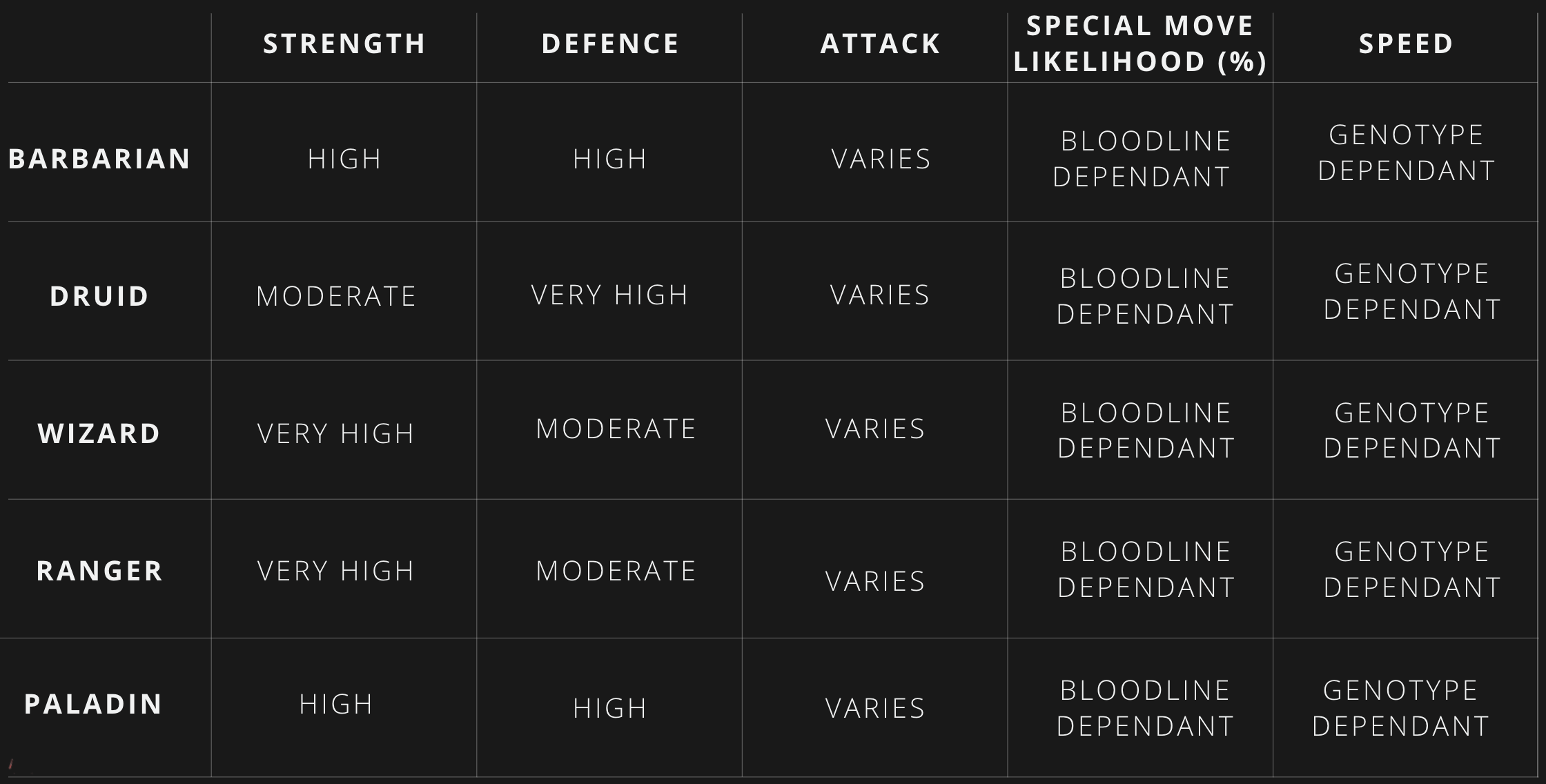 The best Battlemasters will be able to find the right class that fits their playing style on their way to domination. Will you go aggressively on the attack with a Barbarian? Protect yourself with the high defensive abilities of the Druid? Or do you prefer the more balanced approach of the Paladin? You control your destiny on the battlefield.

Similar to the aforementioned classes, there are also five Bloodlines in The Red Village. These reflect the Champions unique genetic makeup. Four Classes are considered Purebloods and are only available as direct mints from The Red Village website during one of four planned drops. The total number of Purebloods will be 28,000. No more will ever be minted.

The fifth bloodline consists of Halfblood Champions, summoned from two pureblood champions. We will discuss this gameplay mechanic more later in the article. Similar to the hugely popular digital horse racing platform Zed Run, The Red Village uses indexing notation to denote both bloodline and rarity. Genesis Champions have an R number of R1-R3; Mystics are R4-R6; Warlords are R7-R9, and Lionhearts are R10-R12. Halfblood Champions refer to any character who is Summoned, and will have an R number between R13 and R99.

Not much is known about the ability differences between the bloodlines, but we do know that the earlier your R number, the more likely your champion is to perform a special move in any given fight. This adds a unique advantage in closely matched fights between champions in lesser bloodlines. This is certainly something for all Battlemasters to be aware of.

Each champion contains its own set of random cosmetic traits and characteristics: breed, hair style, hair color, armor color and war paint. While these traits do not affect fighting ability, they do aid in value propositions concerning scarcity and rarity.

Breed: There are seven different breeds; Highborn, Nordic, Half-Dwarf, Elf, Origin, Orc, and The Undead. Breeds are shown in the skin color and facial features of the Champion.

Hairstyle: There are five different hairstyles for each class of Champion

Armor color: There are 47 different armor colors of different rarities, which are organized into palette types. Armor color is shown in the armor of the Champion.

War paint: There are three different war paint styles (one of which is 'no warpaint'), and 8 different colors of warpaint. 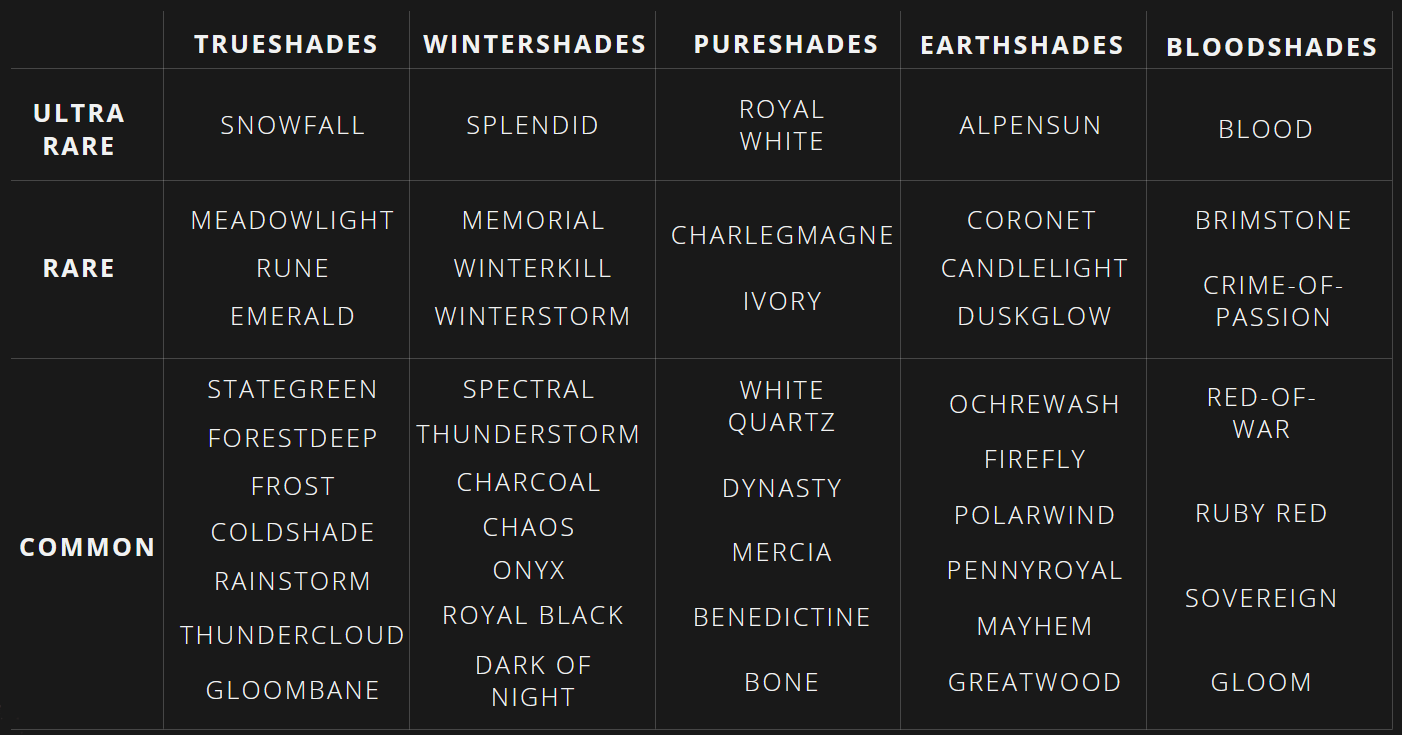 The key to discovering just how competitive your Champion is lies in understanding its Skill Traits. These five traits are assigned at random for pureblood champions and inherited by Halfbloods. As Battlemasters, we do not know the extent of these traits within our champions. By fighting against different opponents and in different arenas and tournaments we work to learn our champions abilities. By doing so, you can gain an edge over other Battlemasters and their champions. Below are the five traits with brief explanations.

Attack: This is the variation in the strength of a Champion's strike. Champions with higher attack points are more likely to hit towards the upper range of their strength factor more frequently.

Strength: This is the possible damage inflicted by any given strike. Stronger Champions will be able to hit more devastating blows.

Accuracy: This is the likelihood of landing a given strike. Champions with higher Accuracy are less likely to miss a given hit or have it blocked.

Defense: This is how hard of a strike a Champion can absorb before taking damage in a fight. More defensive Champions are likely to incur less damage.

Fatigue: This is how quickly a Champion recovers after participating in a fight or tournament. Champions with better fatigue ratings recover more quickly and will fight closer to their best more quickly.

Finally, each champion contains preferences in regards to fighting style, arena, weather, and crowd size. While the last three preferences are in the works, for now we must focus on fighting preferences. Before the battle, the Battlemaster must select the preference they feel best suits the matchup based on their own understanding of their champion and of their opponent. Here is where we really start to see skill come into play. Below are the preferences and their effects on the champion. 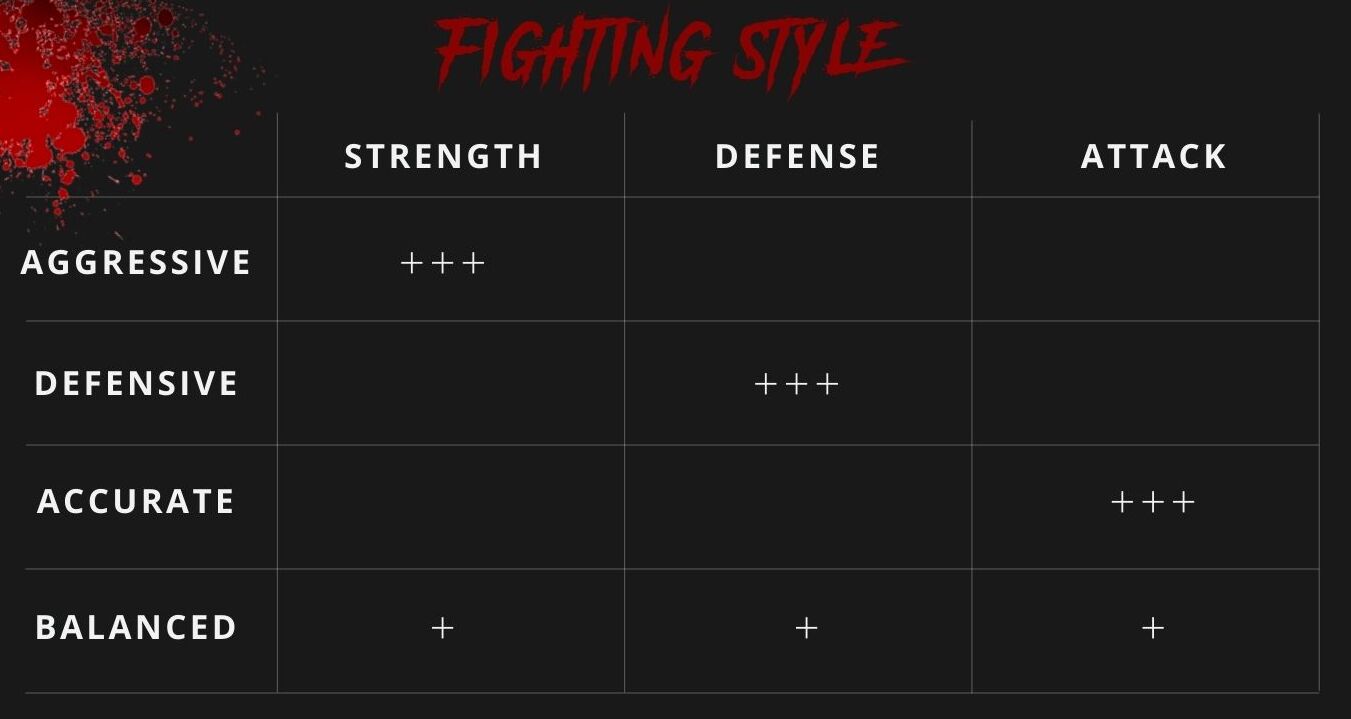 The Red Village includes several unique and exciting types of gameplay, including tournaments with up to eight participants, 1v1s, free tournaments, and faction fights! In 1v1 duels, the winner claims the other Battlemaster's Champion! Truly a battle fit for bloodlust. Champions participate in the fighting class which marks their current battle rating. Current ratings are unknown, but the expected breakdown is listed below.

For many, factions may be one of the most exciting features of The Red Village. Join up with other NFT holders of your favorite projects to battle for glory. Meet and discuss strategy in faction specific Discord channels, battle in 8v8 fights against other factions, and lead your teams to victory.

Summoning is the breeding mechanism within The Red Village. Characters created as a result of summoning are called Halfbloods. Outside of the four Pureblood drops, this will be the only way new champions can enter the The Red Village ecosystem. To summon, two characters from the same class must be used. Using each champion's unique genetic imprint, strengths and weaknesses are passed down to the Halfblood.

The R# calculations for summoning work as follows: "Halfblood Champions will receive an Rnumber that is the sum of its two blood donors +11. This is done to avoid diluting the scarce R1-R12 Genotypes. For example, if an R3 Genesis Champion gives blood and this is mixed with an R11 Lionheart Champion, this will create an R25 Halfblood Champion. If, however, two R1 Genesis Champions are used in the ritual, the Summoned Champion will receive an Rnumber of R13."

The drop process for the first batch of champions went over swimmingly, with more news of gameplay mechanics and schedule dropping imminently. The project is targeting early January for live gameplay and NFT gamers everywhere are chomping at the bit to get into the ring and battle! For more information regarding the project and announcements, you can visit The Red Village guide,  the official website or the project's official Discord. We will see you on the fields of battle!