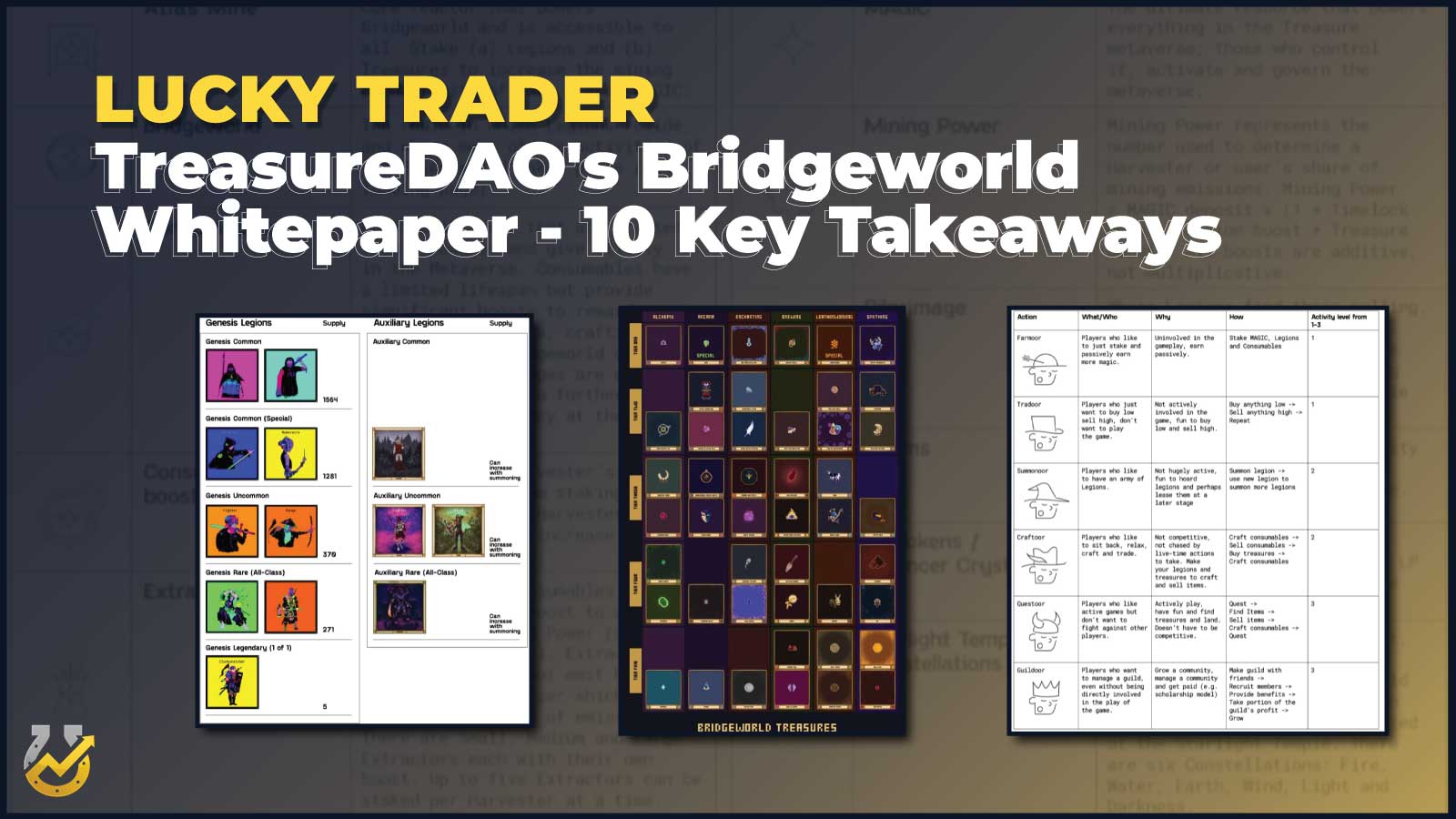 January 19 was a big day for the @Treasure_DAO ecosystem, starting off with a Twitter spaces hosted by Arbitrum to talk about the upcoming Bridgeworld launch and then capped by the release of the corresponding 43-page Bridgeworld Whitepaper.

At 43-pages long, there is a lot to unpack. And the paper contains some detailed math, statistics, and equations which can come across as overwhelming. I have done my best to simplify and pull out some of the most important information from the paper and create 10 key takeaways you should care about.

1. $MAGIC is the ultimate goal of this game.

This is not huge news, as we knew $MAGIC was critically important to the game and the currency of the Bridgeworld metaverse. But its importance was certainly reinforced early and often.

From pg. 3, “Legions, Treasures and other NFTs native to Bridgeworld, represent player characters and items that are used to explore, create and ultimately extract $MAGIC from the world.”

The concept is reinforced in the glossary, as the $MAGIC definition states “those who control it ($MAGIC), activate and control the metaverse.”

2. There are multiple ways to “play” the game.

The whitepaper provided a beautiful “gamepath” diagram of the various ways to interact in Bridgeworld. There are four primary methods of gameplay, listed in order of effort required: Mining, Questing, Summoning, and Forging. 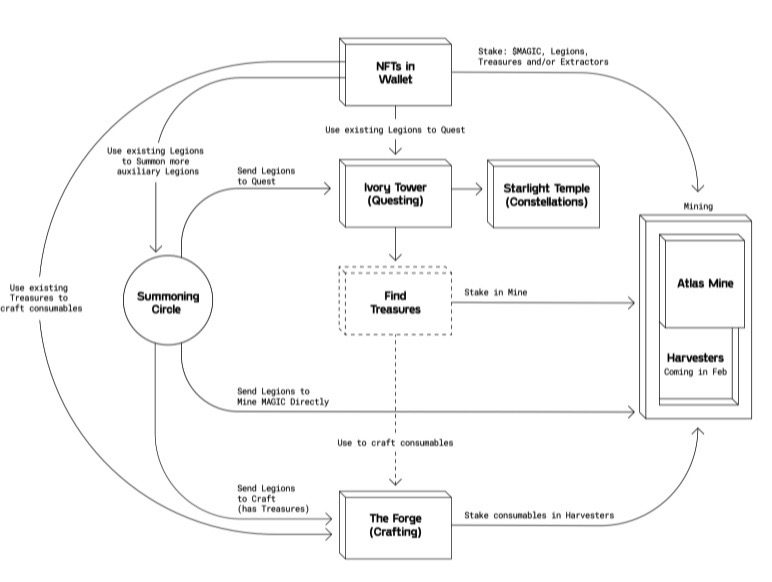 Mining is simply staking the $MAGIC token, Legion NFTs, and/or Treasure NFTs in the Atlas mine. The Atlas mine is the name of the new mine rolled out for the Bridgeworld launch, with different staking mechanics and yield rates than the Genesis mine.

Questing is using the legion characters to go on adventures in Bridgeworld, with the goal of finding and accumulating Treasure NFTs. Quests have different levels of difficulty and tiered rewards, based on that difficulty.

Summoning is using the legion characters to generate new Auxiliary Legions into Bridgeworld. There are different rules and costs for how Legions Genesis can summon versus common Legions (referred to as Auxiliary), and Genesis have the upper hand.

Forging is where Treasures come into play. The legion characters can create “valuable consumables” in The Forge, by leveraging their Treasure NFTs. Similar to quests and summons, there are different tiers of difficulty and costs associated with crafting, along with a chance that the Treasure NFT is destroyed in the process.

There is a full glossary of terms at the beginning of the whitepaper (pg. 5) and anyone trying to gain a solid understanding of the world should stop and read it before moving on in the document.

Several of these terms and concepts are new (consumables, extractors, harvesters, etc.) and this is the first time we are seeing them fully defined. 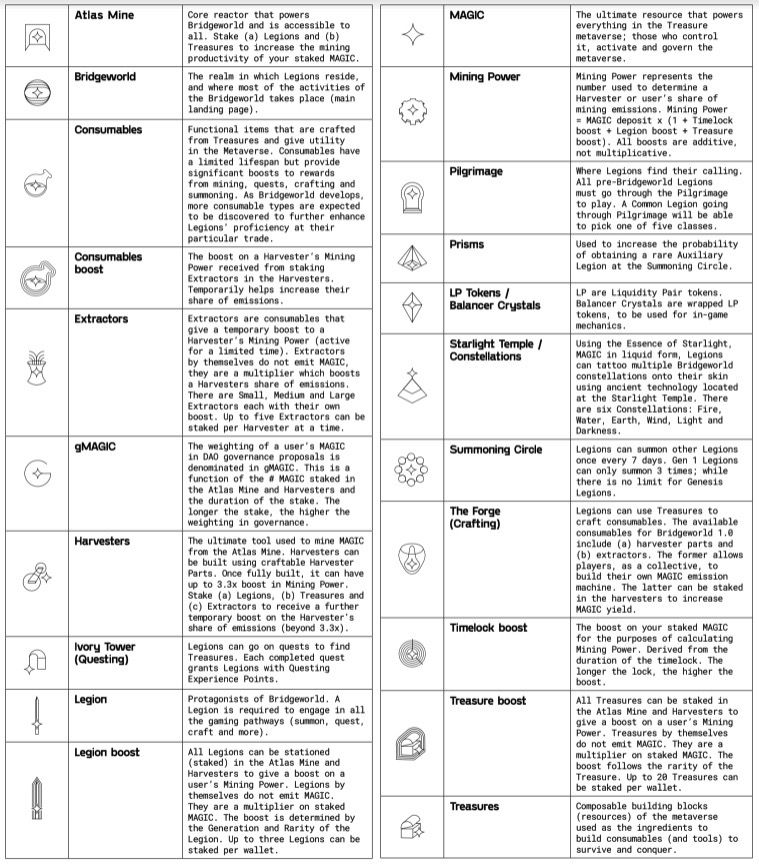 4. Legions have plenty of utility and can be used in several ways.

We have confirmation that Legions are the characters in Bridgeworld and are required to play the game. You can play with either Legions Genesis or Legions Common (now branded as Auxiliary).

The Genesis have fixed supply (counts below) but the auxiliary will increase in supply through the summoning aspect of the game. 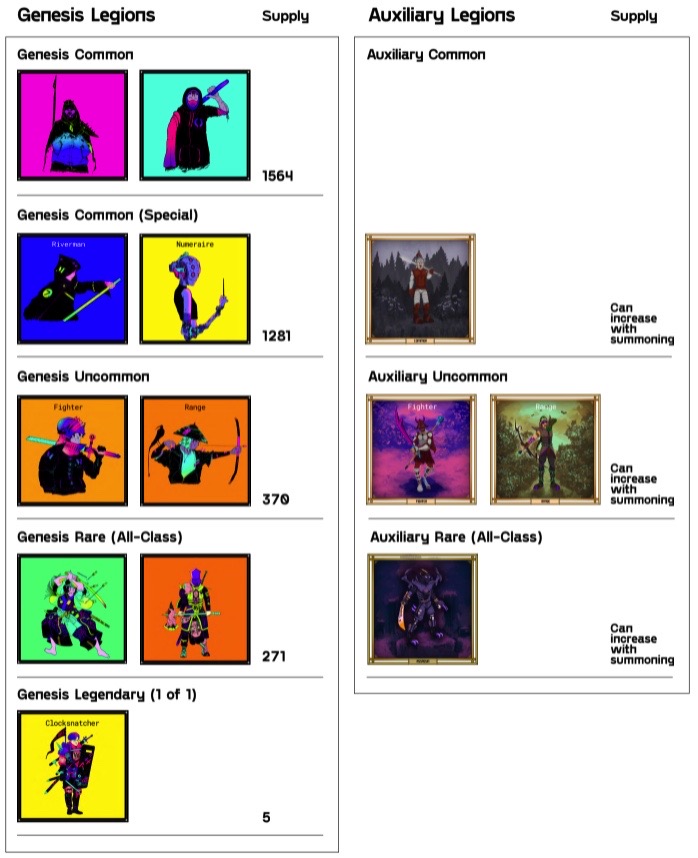 As described in the second takeaway above, there are four primary actions the legion characters can take. They can go on quests to get treasures, summon additional Aux Legions, craft consumables using Treasure NFTs, and be staked in the mines (Atlas and Harvest). To take any of those actions, the common Legions must first go on a 24-hour pilgrimage to be aligned to a class (i.e. Assassin, Fighter).

Utility is based on generation (Genesis or Auxiliary) and relative rarity. With respect to mining, the Legions utility is a staking yield boost. See the table below for details.

Summoning utility also favors the genesis Legions, as they have unlimited summoning power vs the auxiliary Legions which have just one summon, and it’s at half the cost (100 $MAGIC versus 200 $MAGIC). They also have better odds in summoning rare auxiliary Legions.

5. Treasures have multiple uses, along with hints of use in other metaverses.

Treasures remain a foundational component of Bridgeworld. Defined as “composable building blocks," the legion characters will use them to create “consumables” (functional items for the game).

The Treasures are categorized by tier and crafting profession. There are 5 tiers, in descending order of importance from 1-5. And there are 6 crafting professions: Alchemy, Arcana, Enchanting, Brewing, Leatherworking and Smithing. 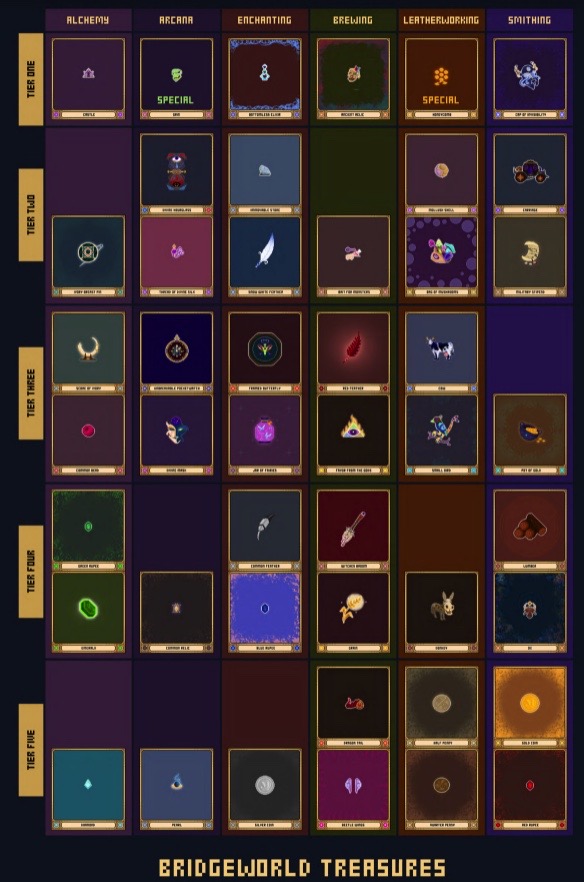 Each Treasure has a specific staking boost as well, for those staked in either the Atlas or Harvest mine. The highest boost in tier 1 is 15.78 percent (honeycombs and grin) and the lowest boost in tier 5 is 0.75 percent (quarter penny). See page 20 of the whitepaper for a full listing of yield boosts.

Related to crafting (the primary use of Treasures), there are 3 tiers of recipes (easy, medium, hard) and different requirements per recipe based on the Treasure tiers. There are different durations of crafting and success rates, and the Treasure NFTs can be broken during the crafting process. See pages 40-42 for full detail.

Lastly, but maybe most important, the authors hint at Treasures use in other metaverses. From the paper, "Treasures are the composable building blocks in Brdigeworld that all be used inter- and intra-metaverse. Beyond Bridgeworld, other world's characters will eventually be able to harness the power of Treasures to create consumables specific to their metaverse."

The potential to use Treaures across projects and metaverses would create even more utility for these NFTs. We will have to stay tuned to see which projects are the first to tap into Treasures potential.

6. There is power in mining $MAGIC and Bridgeworld is the primary recipient.

Mining is a fundamental aspect of Bridgeworld and the most “hands-off” approach to participating in it next to simply holding $MAGIC.

The Genesis mine ending on January 24 will have emitted 20M $MAGIC tokens. That leaves approximately 23.5M tokens to be released over the next 8 months, most of which will be driven to the Bridgeworld game.

While partner ecosystems do get recurring mining bonuses as incentives to help get them launched, they are relatively limited. Once per quarter, a new project will receive 50 percent of the $MAGIC emissions for  two weeks. Clearly, Bridgeworld is the head-and-shoulders winner of the emission pool. 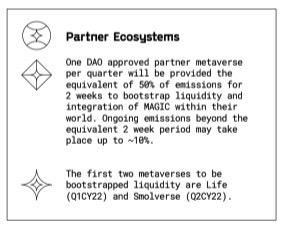 Anyone who wants to play Bridgeworld has to time lock some $MAGIC to gain entry. Beyond staking $MAGIC, each of the NFTs can be staked as well (with limits), including the Legions, Treasures and Consumables.

There are different and increasing staking boosts based on amount of time locked, increasing with longer durations.

The NFT boosts are additive to the $MAGIC staking boost, and their specific yields have been outlined up above. The authors include a nice example to show how the math will work on page 18 of the paper. Those who wish to dive into the specifics can dive in there.

Math aside, clearly the founders are incentivizing staking both the $MAGIC token and the NFTs with these tokenomics.

7. Game theory is heavily reliant on Guilds and sub-DAOs.

The authors include three pages of game theory in the paper (27-29) and the primary takeaway is that social coordination is heavily encouraged in this metaverse. The mechanism used to encourage it is the Harvester mine (with 10M $MAGIC as potential prize). 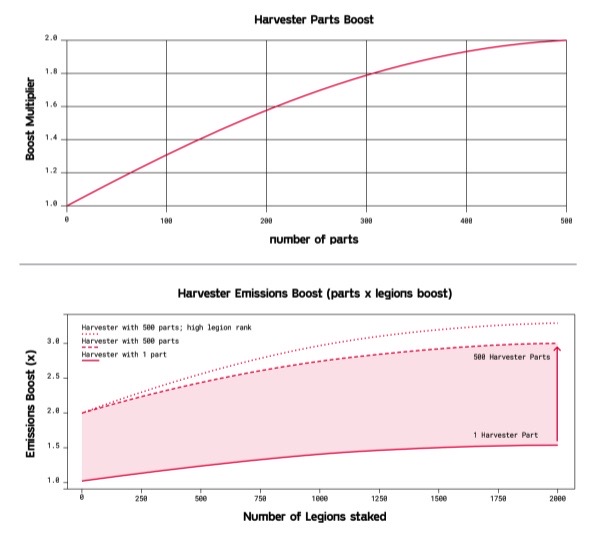 It would be extremely costly for a single person to reach max boost with the numbers at play here, thus the social coordination. But the stakes are very high given the amount of $MAGIC in the harvest mine, and thus large incentives for people to work together to maximize boost and yield.

I won’t go into game theory tactics here as that could be its own post, but the authors do state that there is no “correct” way to play the game and multiple paths to success.

8. Playing the game can be automated.

One of the biggest concerns I’ve seen in conversations with folks looking to get involved in Bridgeworld is the potential time commitment. I have good news - most of the game play can be automated or executed with fairly minimal effort.

Let’s start with questing, one of the primary uses of the Legions. To get to level 5, a player needs to complete 50 quests. That sounds time intensive and could be a non-starter to most.

Luckily the team enabled automation via balancer crystals (wrapped liquidity pool positions).  Staking these balancer crystals runs a loop for the player to execute quests. See the table below, noting these are requirements per legion.

This is how the founders are “gamifying liquidity” which we’ll cover more below.

Summoning takes 7 days per request - thus a “set it and forget it” model. This can likely be done in a few minutes per week. Crafting takes 8-16 hrs pending the difficulty level and feels like the most time intensive aspect of the game. The time spent figuring out which moves to make however, that's a different story.

Luckily, with the four potential game paths, users have real choices about their level of commitment - which is a great segue to the next takeaway.

9. There are varying levels of time commitment required to participate.

Building on the last takeaway, players have several options for how much time to devote to this game. The authors knew this would be a concern and proactively addressed it - see this nice breakdown of effort level tied to different activities in the game, from their perspective. 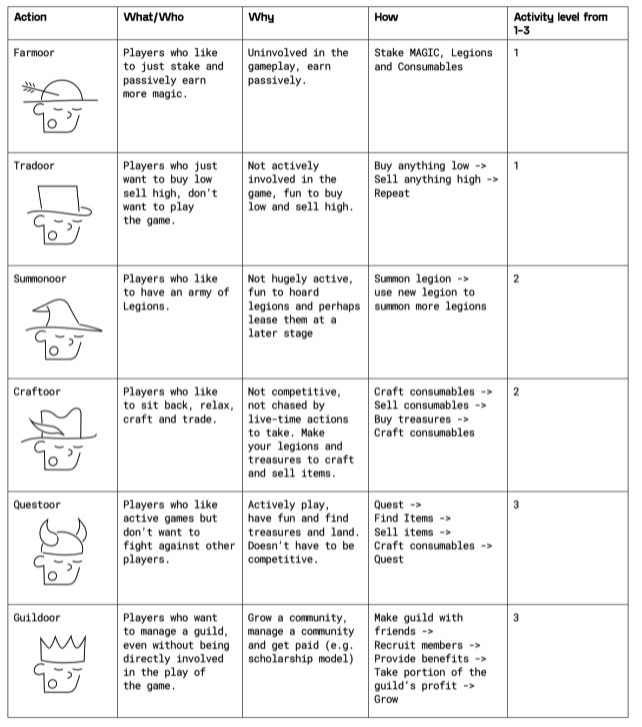 A few thoughts on this breakdown:

When reading the initial whitepaper and founder’s vision blog, I kept coming across “gamifying liquidity” - but I had no clue what that actually meant. I wrote it off as buzzwords and moved on.

With the new Bridgeworld whitepaper, we now know what this means exactly. The founders are making liquidity pool positions (LP) instrumental components of the game, required to unlock certain features.

They are calling these LP tokens “balancer crystals," and they are required for Summoning. They are also required for quest automation, which will be another big use case. So, to play out those aspects of the game, players will be incentivized to own LP positions.

This is a brilliant tactic by the founders and one I have never seen before. Liquidity for any token is critically important and they have found a way to incorporate it within the game in a meaningful and easy to understand way. This may be the single most innovative aspect of Bridgeworld and the entire Treasure ecosystem.

Having shared a few key takeaways from the Bridgeworld whitepaper, I also want to leave a few final thoughts:

Now we look forward to January 24, with the completion of the genesis mine, the big token unlock, and the release of Bridgeworld. It will be a busy week in the Treasure world, that much is certain.

1/ Welcome To Bridgeworld, a megathread 🧵

Bridgeworld (BW) is a community driven game of strategic commerce, trade and domination which is also the future hub for the Gigaverse.

Resources, strategy and social coordination will be key to success and riches within BW.