The NFT market is writing its come-back story, highlighted by a 2500 ETH ape CryptoPunk sale and the most hyped (and successful) Art Blocks Curated mint in months. Bullish signs are continuing to pile up, even in this incredibly low liquidity environment. July has just $234M in OpenSea volume nearly halfway through the month, barely on pace to surpass last July's $324M month and what will likely market the lowest volume month in a year.

On a day and weekend without many new mints or drops, the primary focus event will be Yuga's The Otherside demo happening tomorrow. A major roadmap announcement or game announcement during that demo could send the BAYC ecosystem into a frenzy. Otherwise, any other new or existing project which can capture attention today has some major runway to move this weekend.

Art Blocks continued its bullish run-up on Wednesday, with Curated drop Running Moon minting out near the top of the dutch auction in the 2.8-3 ETH range (officially 2.73 bottom). The secondary market ran past 4.5 ETH in the first few hours of trading with top-end sales in the 8-9 ETH range, before settling near 4 ETH. A massive win for the artist Licia He and all minters.

With that outcome in the rearview mirror, nearly every upcoming Art Blocks drop is going to have more and more attention. Today's mint will certainly have attention, but it is an absolute wildcard.

Why? There are only 19 NFTs to mint, starting at a 19 ETH Dutch auction.

Leveraging biblical allusions to the book of Genesis "For you are dust, and to dust, you shall return," within rock shapes, the artist Santiago reflects on "the unavoidable progress of time" and relays their call for a sustainable and ethical life.

Hype is strong for this drop, which will be the lowest supply set in Art Blocks history (I believe the next lowest is 50 count). All outcomes are in play, including a mint out near the top of the dutch in the high teens, or the auction falling to the 2-3 ETH range. The other kicker with the auction - is it could last 72 hours, in one of the slowest decreases ever seen.

This one will be incredibly hard to trade, and ongoing liquidity will be a big question - so this just might be a fun one to watch over the weekend. But for those hardcore collectors taking a serious look at this one, make sure to check out their sample outputs at the artist's site.

The latest celebrity NFT collection drops today on Coinbase NFT as Bill Murray debuts a 1,000 supply biographical NFT project telling the story of his life. There will be 100 different NFT types, each with different color schemes making up the total.

From the project site, there are hints at the utility of the NFT, promising collectors access to a club with "once in a lift time experiences" with Bill and the ability to participate in the evolution of the NFT community. Not great, to be blunt.

There are some red flags with this mint. First, it launched on Coinbase NFT, which has done just half the lifetime revenue as Gamestop NFT, which just launched this week. Then Bill executed the classic celebrity intro gambit, buying a Cool Cat NFT and a Gutter Cat to show he's "one of us", just days before his NFT launch. And then there's the sale price - 1.5 ETH each.

Unless you are an avid Bill Murray fan, this is likely one to pass and it will be incredibly surprised if it sells more than 10-20% of the supply. But if overpriced celebrity NFTs are your thing, by all means, have it.

Own a piece of the Bill Murray legacy. Each NFT is a true 1/1 and all stories were reviewed, edited, and approved personally by Bill and his son, Jackson.

There are several new free mints dropping today, likely trying to capitalize on the quiet weekend. For awareness, free mint meta has not performed too well in the past few weeks, with just WZRDS and Moonrunners hanging around and most others have already started the slow march back to zero. But these are still great risk/reward spots and if any capture market attention, they could run.

With this many drops, it's doubtful many will have success. Typically follower count is one metric to use for which will be the most hyped/have the best shot at taking off, so with that in mind, Misfits, Beings and Fantasize likely have the best shot. But anything can happen, and last night paid mint Mirakai Scrolls with just 10k Twitter followers took over the markets and 5x'd.

For anyone minting, make sure to follow best safety practices (mint from a mint wallet and not your main, do diligence before signing any transactions, etc.).

There were some major headlines on Thursday, both positive and negative.

Starting with the bad news, OpenSea announced it laid off 20% of its staff, allowing the leading NFT marketplace to have "five years of runway" to survive a crypto/NFT winter. Anyone following the markets is well aware of the massive revenue reduction the marketplace has faced, and if ETH stays at these local levels for any duration, that fall-off is very likely to continue. It remains to be seen what this reduction in the head count will mean for OpenSea customer service or other impacts, as the company faces increasing backlash related to its flagging of suspicious listings.

Let's switch to more positive news. Kevin Rose and the PROOF team announced the acquisition of the Divergence engineering team, which has worked on several projects including G-money's Admit One, and which worked on the nesting contract for Moonbirds (as contractors). The team is being brought in to help launch the much anticipated social universe Project Highrise which is supposedly set to launch this summer. Certainly, the PROOF team continuing to expand its staff in what is being hailed as a great acquisition is bullish for that ecosystem.

Today we're excited to announce the acquisition of the Divergence team. @divergenceharri and @divergencearran are an incredible engineering team with a proven track record of building on the NFT and Web3 ecosystem.

The last major headline comes from the Jenkins the Valet team, announcing their partnership with SALT Audio to launch a new podcast and "gamified audio" experience. The team will be seeking 6,942 licensing spots for Writers Room NFT owners as part of this partnership, and six different communities will be featured in this fiction podcast. The Jenkins team continues to innovate in the space and is not resting on its heels after the launch of its latest PFP/staking NFT in Bored & Dangerous just a few days ago.

It was an interesting day in the NFT markets with several new joiners added to the daily leaderboard, though with mixed results.

Nina's Super Cool World from the GODA team minted out its public sale of 5,030 NFTs at 0.5 ETH each and then saw nearly 2k ETH secondary volume, though its floor settled just 20 percent above the mint price. Another new joiner in "Life Goes On" managed 1300 ETH revenue and a floor price of 0.2 ETH in its debut. Then Mirakai Scrolls had another successful debut, minting out casually last night at 0.05 ETH before running past 0.20 ETH on the secondary markets with nearly 1K ETH volume.

New joiners aside, the typical Yuga ecosystem projects dominated the rest of the headlines. Punks saw 1,200 ETH and its floor price held at 78 ETH, but more interesting are some of the recent bids received. Ape punk 4156 received a new bid of 2,690 ETH, following the 2,500 ETH sale of the vape ape punk just a few days ago. If this goes through, it would make the 3rd all-time highest sale in ETH terms. Additionally, Zombie punks are catching higher bids, with two 800+ ETH bids outstanding on these third-rarest punk types.

BAYC, MAYC, and Otherdeeds seem to be mostly in chop mode ahead of tomorrow's big demo, which is a bit surprising. Typically this market front runs any potential announcement, thus it doesn't seem the market expects any major news tomorrow. But if a big announcement does come, expect these sets to dominate trading over the weekend and into next week. 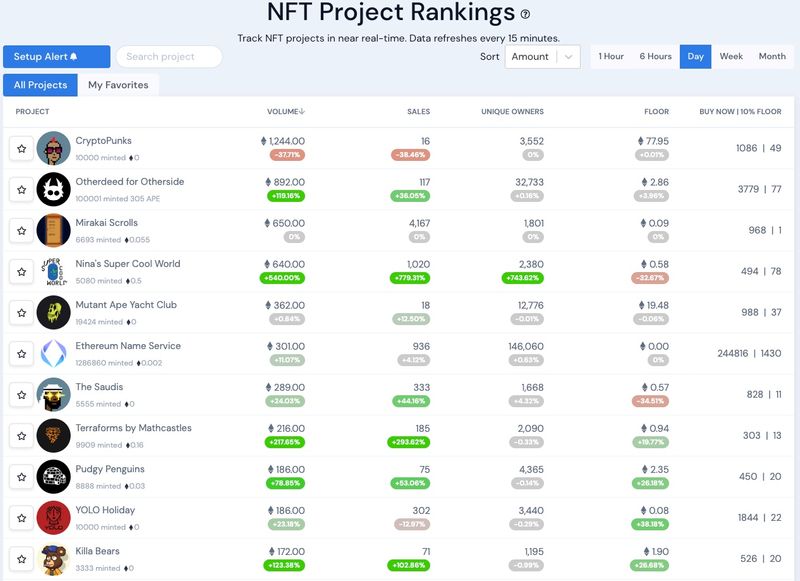 The crypto markets had strong gains Thursday, with BTC up 5% to $20.8k and ETH up a whopping 12% to $1212 on the day as crypto shows more signs of decoupling from equities (see below). This uptick came as a nice surprise, as Wednesday's inflation numbers came in higher than expected at 9.1%, though sentiment is growing the near-term inflation has peaked and may likely drop in July, which could be a small boost for markets.

Growing confidence in the crypto markets will only be a good thing for NFTs. Certainly, NFT floor prices have held up much better than several thought they would in this massive crypto correction, at least in ETH terms, and the top sets are likely primed to launch in a more bullish crypto environment. Bullish signs keep accumulating, with the top-end Punks market on fire and catching top all-time bids, really nice midtier BAYC sales, and Art Blocks proving its relevance and seeing a strong uptick in demand.

It will certainly be an interesting weekend, with all eyes on The Otherside demo tomorrow. A major announcement there could send the Yuga ecosystem nuclear, but even just a strong demo could provide a major boost. There is also an open runway for new projects, and new joiners Mirakai Scrolls and Life Goes On will likely battle today's free mints for the low-cap market's attention today and into the weekend, and whoever wins could see some major success.

Good luck out there to those minting and trading this weekend, and enjoy these summer bullish vibes! For those touching grass, let us help you stay up to date by following the Lucky Trader newsfeed.