A Beginner's Guide to the Treasure Ecosystem and $MAGIC 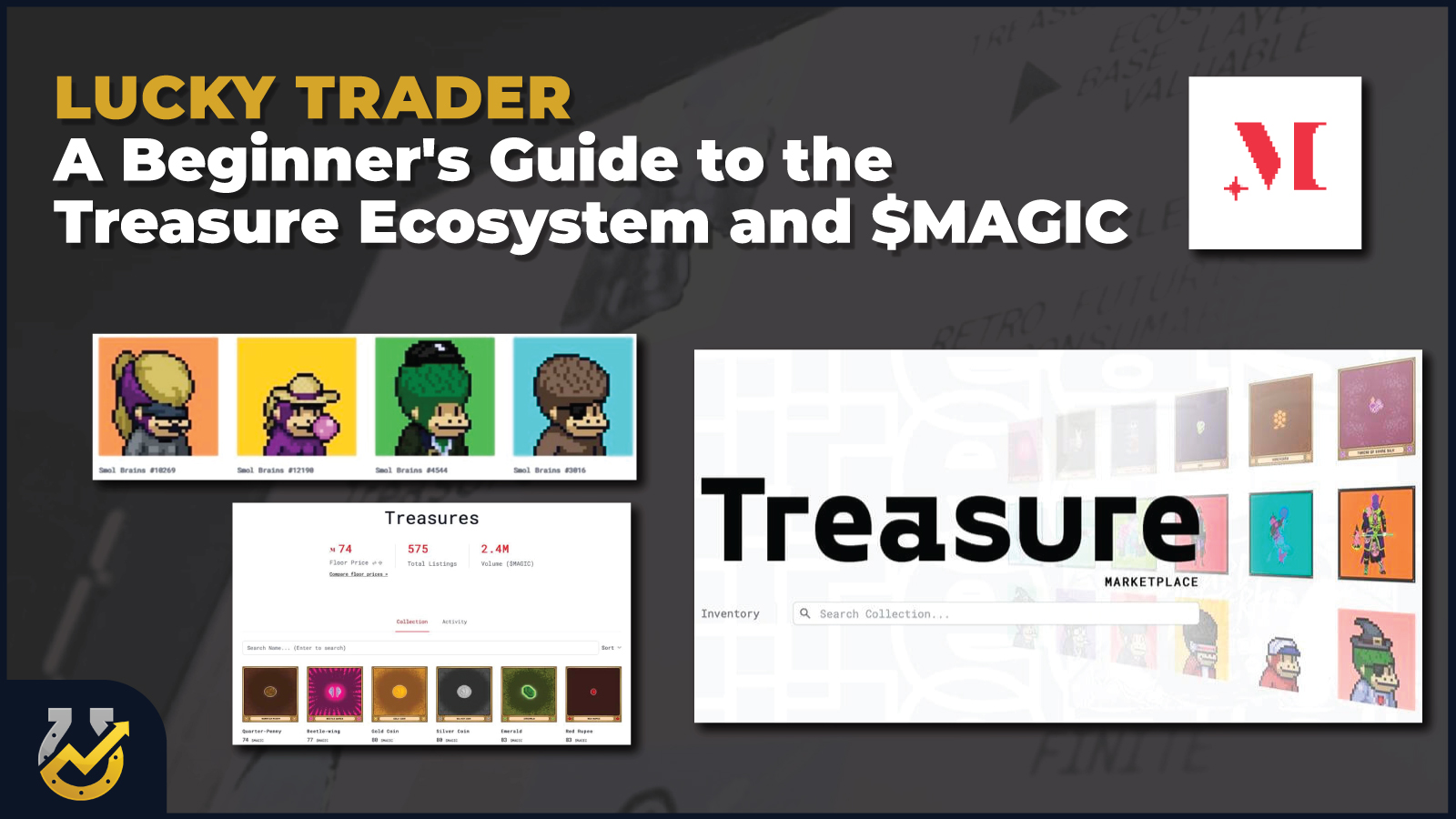 Has your Twitter timeline been full of talk of $MAGIC, Treasure, and Smol Brains posts over the past few weeks? If so, you’re probably wondering what all of the fuss is about.

After heading down the Treasure rabbit hole, I’ve acquired a working knowledge of the ecosystem, its NFT projects, its currency, and more.

In this post, we’ll cover some basic questions including:

From the project’s founding white paper, “Treasure is a decentralized NFT ecosystem on Arbitrum that is built specifically for metaverse projects.” Built on Arbitrum, one of Ethereum's leading layer two scaling solutions, Treasure's decentralized ecosystem is governed by the TreasureDAO and through its native token $MAGIC.

Treasure has multiple functions, and that’s where new users can get tripped up. Treasure is a metaverse, a marketplace, and an NFT.

Treasure is a world of metaverses, with one central metaverse, Bridgeworld. Bridgeworld is where the native Treasure economy lives, and where the $MAGIC token originates.

While Bridgeworld is the metaverse of the native Treasure game and project, the vision is that Treasure will be the building blocks and connection points for several metaverses and projects, all of which use the $MAGIC token as a currency, thus serving as the bounding factor or reserve currency. We’ll show how the Smol Brains, Treasure's most popular project, executes that vision later on in this post. 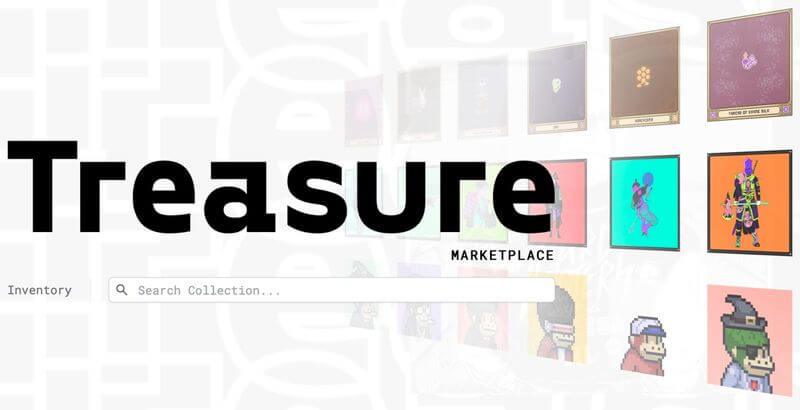 Treasure also has a marketplace with $MAGIC serving as its currency. You can buy and sell all of the Treasure-based NFTs, like Legions or Smol Brains, in the decentralized Treasure marketplace. One of the visions of the TreasureDAO founders is to build a decentralized OpenSea competitor on Arbitrum’s layer two blockchain. A marketplace on Arbitrum would provide several benefits to participants, but most notably lower fees.

The Treasure marketplace volume and revenue has been growing rapidly. On January 4, Treasure’s marketplace saw the highest revenue day in its brief history, doing $9.1MM in volume. In total, the marketplace has done about $40mm in volume.

For perspective, at a current daily revenue rate of $5M/day, Treasure will do $150M/month. OpenSea didn’t break $150M per month until July of 2021. 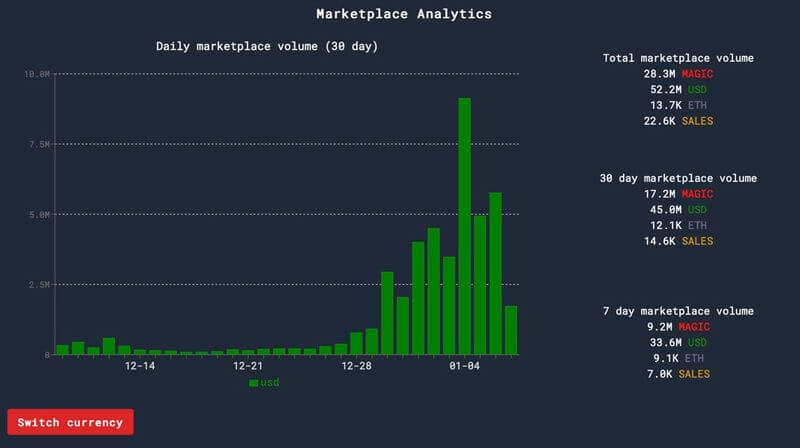 Lastly, Treasures are also NFTs and the key “resources” of the Treasure economy. The players (or PFPs) are the Legion NFTs, who use Treasures NFTs to mine for $MAGIC, go on quests, and play out the adventure game. 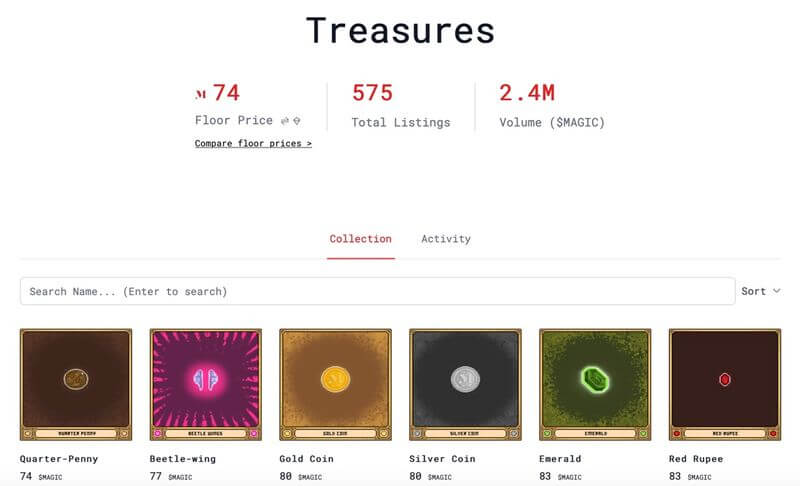 The Treasure ecosystem prides itself on being fair and community driven. Several of the Treasure team members came from the community, and every NFT in the ecosystem was distributed for free. Even the latest round of projects and collections were free-to-mint or airdropped to users.

What Are the Best Treasure NFT Projects?

Though the Bridgeworld Metaverse is the founding and native Treasure game, the vision is to continue to roll out new projects leveraging $MAGIC as the bridge. Three projects have been released already - Life, Smol Brains, and Smol Bodies - and more are already planned. In this piece, we'll focus on Bridgeworld and Smol Brains. 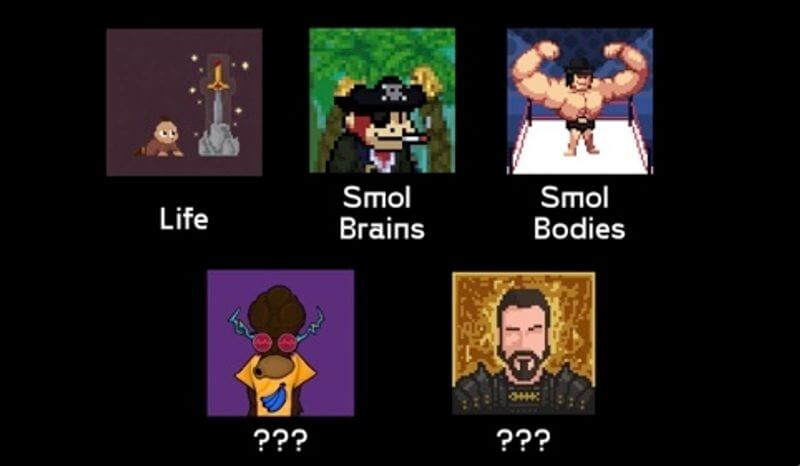 The founding and native project of Treasure is the game that is played out in Bridgeworld, using the Treasures and Legions NFTs. The players in this game are the Legions Genesis and Legions. These players will execute quests and go on adventures to mine $MAGIC and use Treasure NFTs for upgrades.

The different abilities and characteristics of the Legions Genesis characters (shown below) are still to be defined, but they do have varying supplies which has helped influence their market valuations. 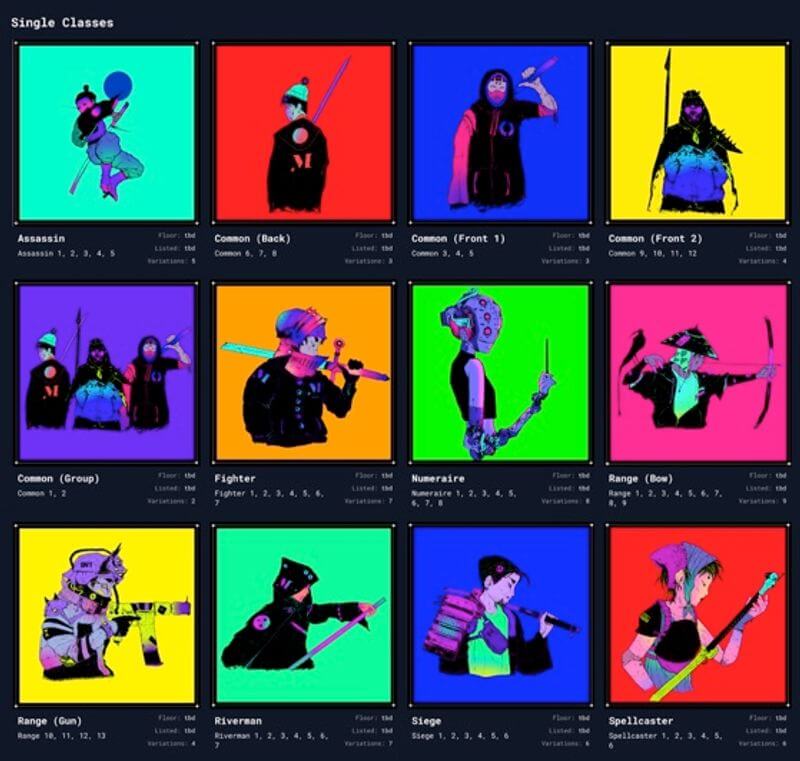 There are dozens of different treasure resources, each also with varying supplies but at much lower price points (starting around 80 $MAGIC). Examples include diamonds, lumber, donkeys, and favor from the gods.

Each resource provides different staking incentives based on its total supply and a point system (more resources at the end of this article).

Additionally the founders have hinted that the first working game will be rolled out soon, allowing users to explore the Bridgeworld Metaverse, find treasure, and accumulate $MAGIC. 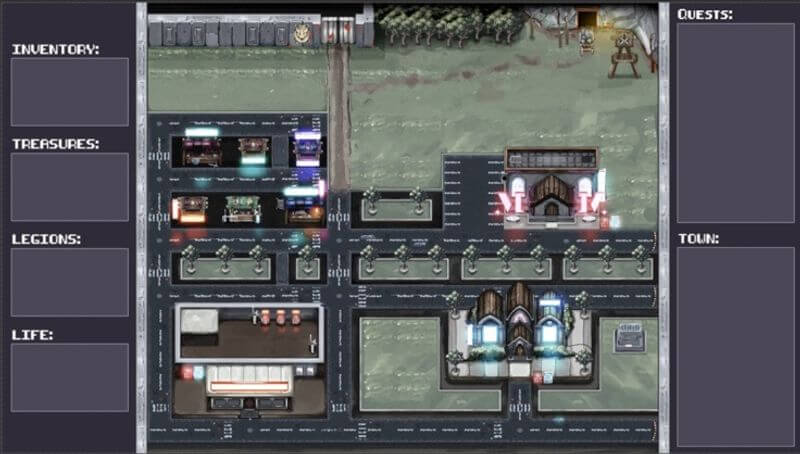 Smol Brains is likely the most widely known project to launch in the Treasure ecosystem and one of the first tests of the founder’s vision of multiple metaverses connected through $MAGIC.

The Smol Brains project is simpler and easier to understand than the Bridgeworld Metaverse with Legions and Treasures.

Smol Brains is a collection of profile photo (or pfp) NFTs, akin to a project like Bored Ape Yacht Club, and these characters all live and play in the Smolverse. Along with the Smol Brains characters, the Smolverse also includes Smol Land and Smol Cars.

The Smolverse has DeFi mechanics already in works with hints of a play-to-earn (P2E) game. Each Smol Brains NFT was minted with an IQ of 0 and a corresponding head size of 0. By staking the Smol Brains, the owner can accrue IQ points which increase the head size of the Smol Brain. The upper limit is 300 IQ and a head size of 5. To stake a Smol Brain, you must own one Smol Land NFT as well.

The benefits of being 300 IQ (or remaining at 0 IQ) are not yet known, but game theory and speculation is already underway, leading to Smols with different IQs having different marketplace valuations. These pfps also have different traits and rarities, which impact the market price. At the time of writing, the current Smol Brain floor is 3,500 $MAGIC.

Additionally, an updated Smol Brain roadmap was published this week, but it is vague. A few action items in the pipeline that have been heavily hinted at include:

What Do NFTs, DeFi, and P2E Mean For Treasure?

From Treasure’s website, “Treasure bridges the growing network of metaverses through an open and composable approach to the convergence of NFTs, DeFi, and gaming.”

These may be some of the hottest buzzwords in the NFT space in 2022 and many are predicting that DeFi x P2E will be one of the highest performing sectors in the NFT space this year, riding the wave of increasingly popular crossover games like DeFi Kingdoms.

Let’s break each of those three components down with examples from these projects.

Each metaverse and project in the Treasure ecosystem has its own NFTs. The Treasure world has its two primary sets of NFTs - the Treasures and the Genesis Legions. While the project Smol Brains has the Smol Brains characters, Smol Land, and Smol Cars.

Each of these projects uses the staking function in different ways to drive utility, with the overall goal of yielding more $MAGIC tokens to participants. This staking mechanism is the primary attachment to DeFi in the Treasure ecosystem.

While not implemented yet, the founding team’s vision is to introduce play-to-earn (P2E) mechanics to the Treasures world. Players can explore the metaverse with their characters and accumulate treasures, $MAGIC tokens, and legions (NFTs). The SmolBrains project has hinted at racing and breeding as future P2E mechanics as well.

How do they all connect? Each project has its own set of characters and resources (NFTs), which can be staked to earn $MAGIC (DeFi). And each project has a mechanisms that allow participants to earn additional NFTs and $MAGIC through different in-world adventures and games (P2E).

How Do I Get Started With Treasure?

For a new user who wants to participate in the Treasure ecosystem, the first step is to acquire $MAGIC. To do that, you will need to “bridge” ETH from the Ethereum mainnet onto the Arbitrum mainnet. For now, we'll spare the technical details for what bridging entails, but think of it as “sending” ETH from your wallet on Ethereum to your wallet on Arbitrum's network.

The actual execution of bridging is actually quite simple. Go to https://bridge.arbitrum.io/ and input the amount of ETH you want to bridge and click "deposit." The deposit process can take up to 10 minutes, but your ETH will be available on Arbitrum. To use this ETH on Arbitrum, you'll need to change the active network in your web3 compatible wallet. If the Arbitrum network has not previously been added to your wallet, you'll need to do so first. From the Arbitrum site you can simply click "Add L2 Network" to add the network to your wallet of choice.

After you've done so, you'll simply click the dropdown arrow on network choice inside your wallet, and select "Arbitrum."

Once bridged, to convert your ETH to $MAGIC, you can use an exchange like Sushiswap. To learn more about Sushiswap and other decentralized exchanges, visit our Beginner's Guide to DeFi or How to Use Uniswap.

With $MAGIC in your arsenal, you can visit the Treasure Marketplace and start shopping.

Jump in both the Treasure and Smol Brains Discord servers, start to do your own additional research, and enjoy your experience on Treasure!

To jump start that research, here are some helpful links, including key documents and blogs.